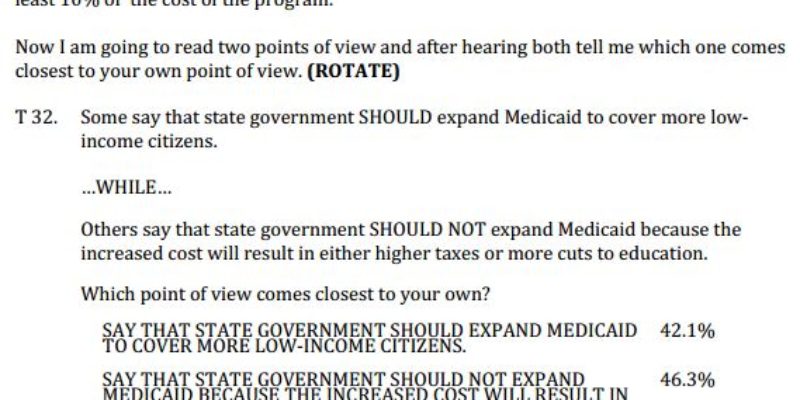 This afternoon, Lane Grigsby’s semi-annual poll taking the pulse of Louisiana’s electorate came out – and the numbers are fascinating.

The poll has 18 pages of questions, taken by Magellan Strategies (Grigsby’s polls had previously been done by Southern Media and Opinion Research, so that’s a change) over a three-day period between March 24 and 26. The sample size of the poll was 600 respondents and the margin for error is 4.1 percent.

And the chief takeaway in the Senate race coming out of this poll is that the race is there for the taking for Bill Cassidy – but he has to do more to take it.

First of all, Mary Landrieu’s favorable number is 41 percent, against 52.2 percent unfavorable. Within that it gets worse; her strong favorables are 23.3 percent and strong unfavorables are 36 percent. Just 4.8 percent have no opinion or never heard of her.

And Landrieu’s re-elect number? It’s a lousy 34.1 percent, against a 56.2 percent number for “elect someone new.”

So she’s practically a dead duck when it comes to whether the voters in Louisiana actually want to send her back to Washington for another six years.

What’s Mary’s big issue right now? Beating up Gov. Jindal over his refusal to expand Medicaid. So how does the Medicaid expansion poll? From the survey… 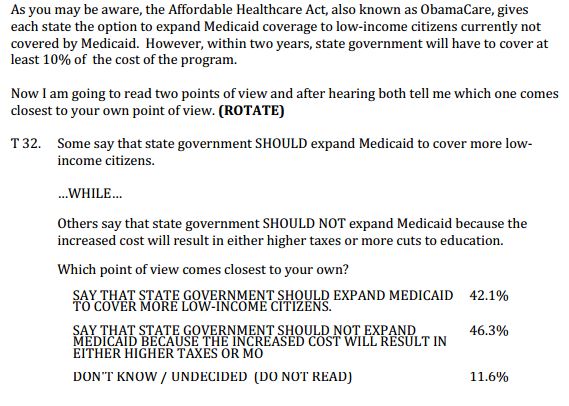 When all you have is 42 percent on your side on your best issue, you’ve got a traction problem.

Meanwhile, on Obamacare – she has some serious problems that simply cannot be fixed through messaging or advertising. To wit, the survey asked whether folks had been affected by Obamacare…

The vast majority of that 72.5 percent are people who get their insurance through their employer – and as we know, the shoe hasn’t dropped on those folks yet, but it’s going to start becoming an issue by this fall just before the election.

But of the 25.8 percent who say they’ve been affected – devastation. 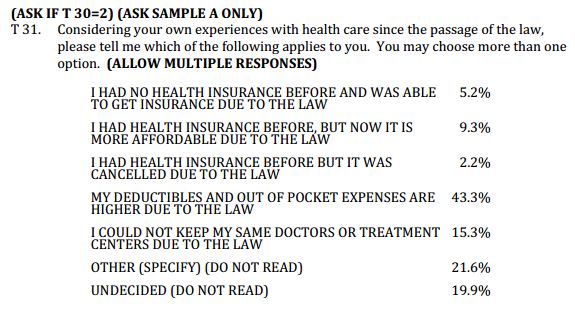 So between people who got booted off their insurance, had to pay more or lost their doctors you’re talking about 60.2 percent of the folks Obamacare has affected who report a negative experience, against just 14.5 percent who report being able to get insurance they couldn’t get before or getting to save money thanks to Obamacare.

You’re not going to change the opinions of those people. Somebody who has had a negative experience with Obamacare not only won’t change their negative opinion of it, they’re going to scream and yell to all their friends about how horrible it is.

That’s why Obamacare polls like crap in Louisiana. It isn’t going to change.

So with those numbers, it’s really not unreasonable to say Landrieu is on life support in her race for re-election.

And yet, here’s the key Senate race question… 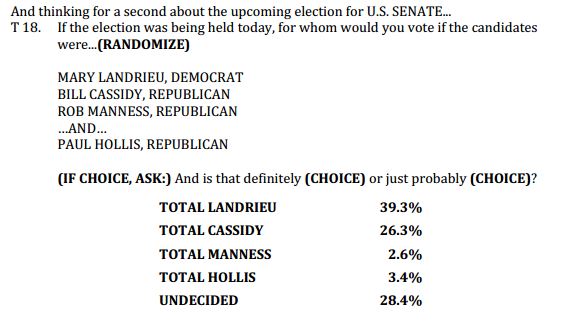 Wait, what? As bad as things are for Landrieu she’s still winning by 13 points? How can that be?

Interestingly, and perhaps inexplicably, the head-to-head race between Landrieu and Cassidy wasn’t polled in this survey. The guess is that 13 point gap probably closes drastically if that question is asked in this survey, but it isn’t.

We can fairly easily diagnose Cassidy’s problem, though. Here’s his approval number: 25.6 percent.

OMG! What a disaster! What’s his unfavorable number?

What that means is that Cassidy is going to need to go up on the air pretty soon with some TV and radio spots that define him and sell a positive image. We’ve taken to disparaging Karl Rove, but his latest Wall Street Journal column does make a very good point about how Republican senate candidates are going to need to start defining themselves, and fast, or else the panicked and out-of-options Democrats out there with numbers that look a lot like Mary’s do are going to paint that picture for them. Cassidy is the poster child for that – after all, Harry Reid’s Senate Majority PAC has run $1.3 million worth of spots attacking him so far. It’s pretty clear those ads have been ineffective, but at some point the Democrats will come up with an ad campaign that will work.

Better to start closing the sale with some voters now, so that the negative ads don’t limit him before he gets going.

There’s a lot of interesting analytical info to be found on the race in this poll even without the head-to-head result. To wit… 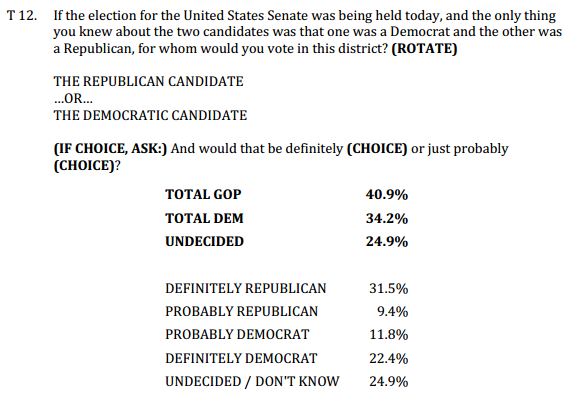 So – a seven-point preference for a Republican senator in the race.

And here are the sample’s registration, party ID and ideological numbers… 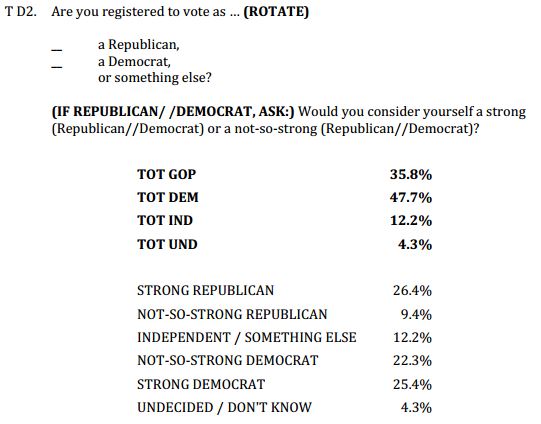 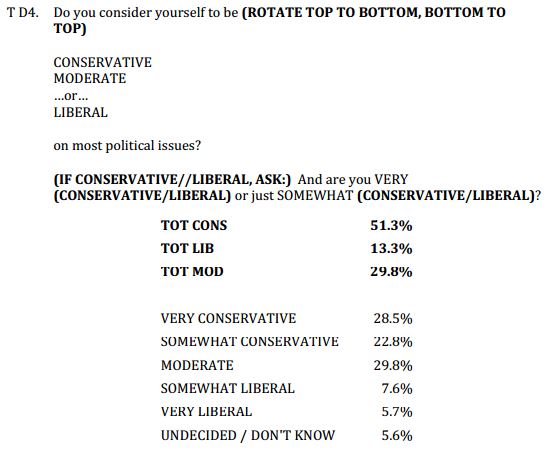 Those numbers, as best as we can recall, track very closely with the vast majority of other recent surveys of the Louisiana electorate we’ve seen. And the party registration tracks almost exactly with the numbers from the Secretary of State’s office; as of Tuesday the state’s voter registration numbers said 47.3 percent of the voters here are Democrats, 27.8 percent are Republicans and 24.9 percent are independents or belong to other parties. There has always been a 8-12 percent lag between people who say they’re registered Republicans in Louisiana and people who actually are Republicans – that’s likely due to the presence of the jungle primary election system we have here which makes it meaningless to actually be a member of a party.

The point being this looks like a relatively accurate sample of the voting population and it’s not skewed.

So when we draw the conclusion that Cassidy has a ton of work to do and a big upside if he’ll go out and do it, we’re not kidding. This poll shows it.

Something else interesting comes from the graphical presentation of the Senate race in the second half of the release. A slide… 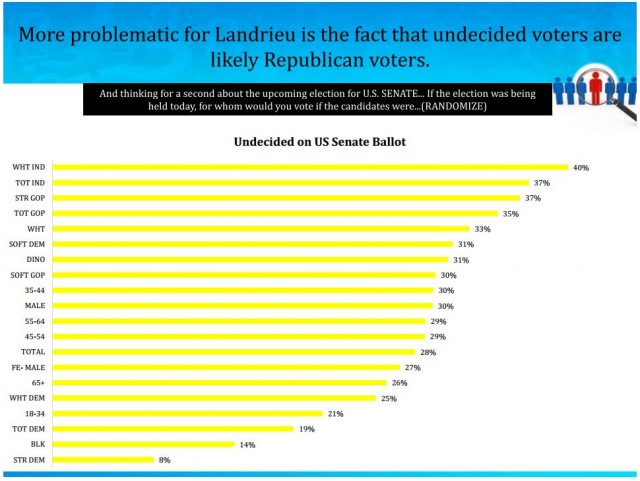 In other words, there are lots of receptive folks out there for Cassidy to bring his message to. 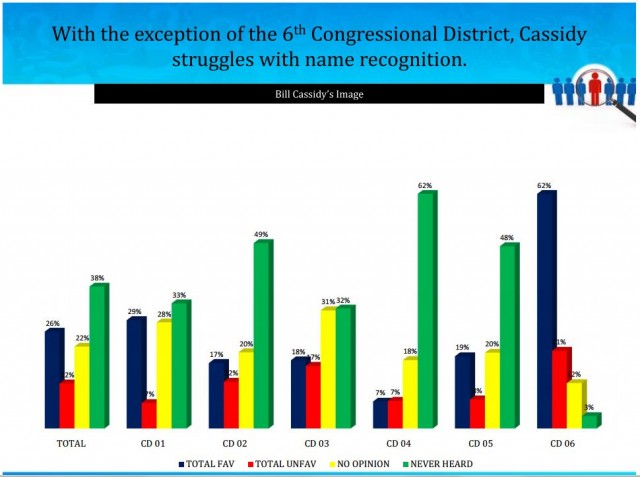 Basically, nobody knows squat about Cassidy in Shreveport, and they know very little more about him in Alexandria and Monroe. And he’s going to want to invest heavily in making himself known to people in Lafayette and Lake Charles as well.

And one more slide on the Senate race… 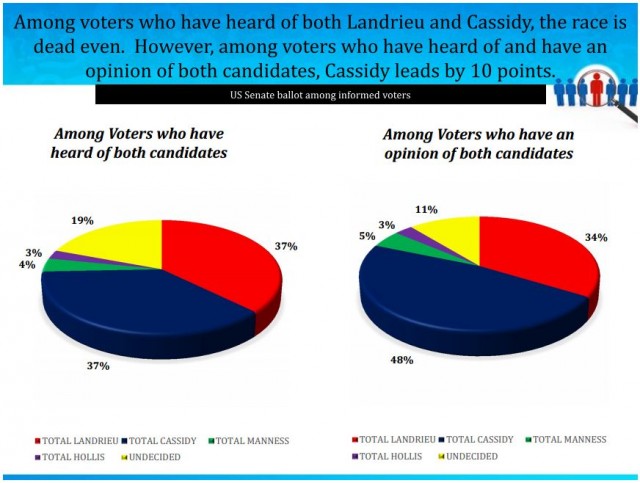 You could take the pie chart on the left as a decent approximation of what a head-to-head race between Cassidy and Landrieu might look like; namely that it’s an even race like most other polls show.

But the pie chart on the right showing Cassidy with a 14-point edge and getting close to 50 among people who are actually plugged in; well – what that means is your more engaged voters are breaking heavily for Cassidy.

He’s got to get more voters engaged on his side. Time to buy some ads with him and a stethoscope, or with a hard hat on, or petting a dog or something.

But another key finding in the poll – despite all the horrific numbers you might have heard about Gov. Bobby Jindal’s approval rating, this survey shows he’s on the comeback trail with Louisiana’s voters (we assume at least partially as a result of the state’s plummeting unemployment rate)… 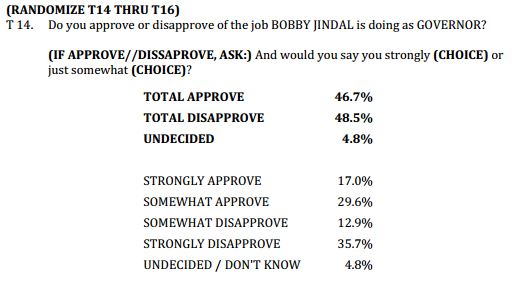 Essentially, he’s at even money with the voters – though if you apply Rasmussen’s old Approval Index and compare his strong favorables with his strong unfavorables that minus-18.7 percent number is pretty ugly.

Still, that’s better than the 30-somethings Jindal was mired in most of last year in several surveys, so his stock appears to be rising. The survey even gave Jindal a 45-40 lead over Hillary Clinton in a 2016 presidential matchup.

Speaking of stock on the rise, get a load of the approval number on Sen. David Vitter! 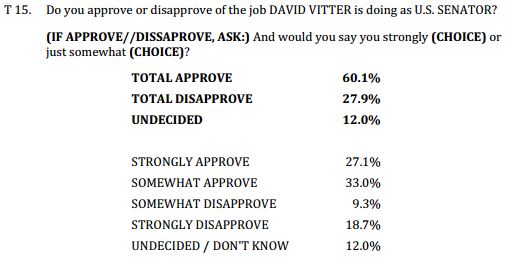 That’s a great result for Vitter, who’s had a reputation as a divisive figure in Louisiana politics since the 2007 “serious sin” stuff played out across the state’s media landscape. To have disapprovals below 30, and strong disapprovals below 20, shows eye-popping strength for the Senator. It also shows that if Vitter were to get behind Cassidy and push him, particularly in places like North Louisiana, it could be a big key to victory.

Naturally, the 2015 governor’s race made it into the survey… 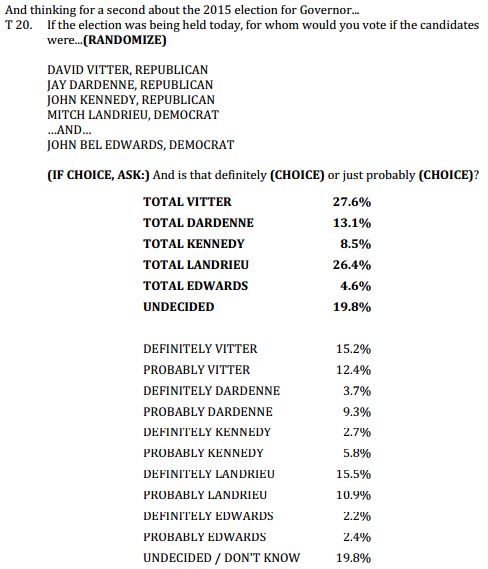 The Vitter-Mitch Landrieu head to head question wasn’t asked, but there is little reason to think Dardenne and Kennedy voters would break against Vitter.

A few other interesting results in the survey… 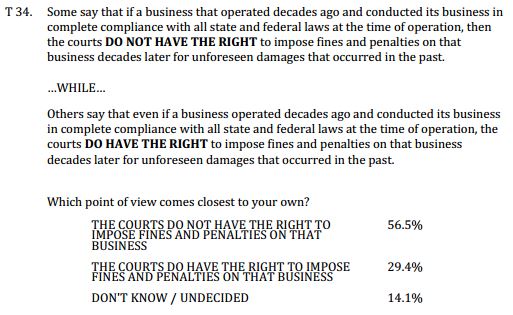