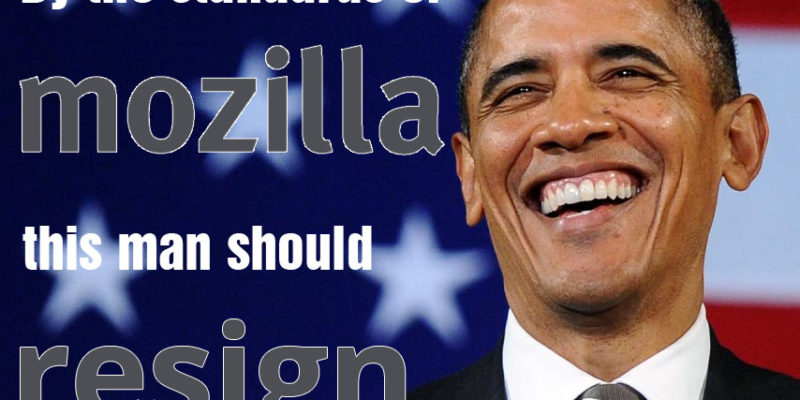 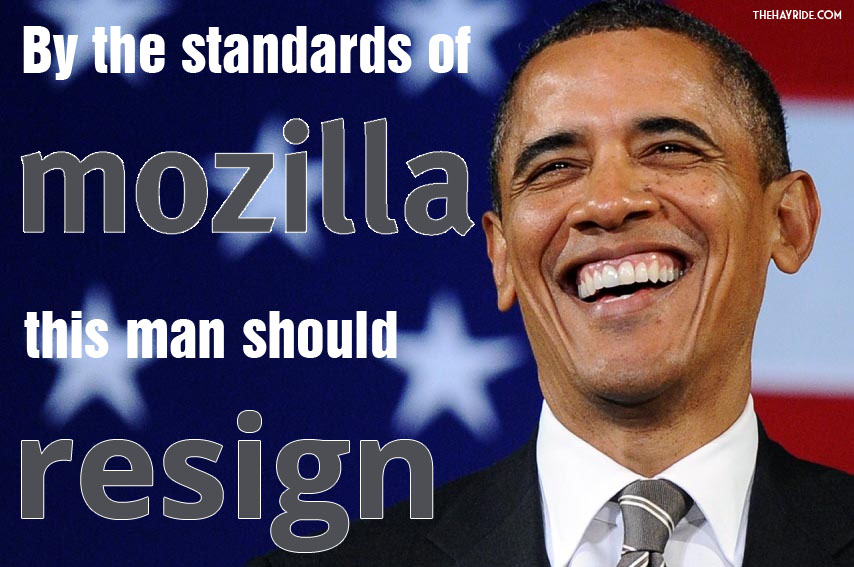 “Brendan Eich, the well-known techie who has gotten swept up in a controversy about his support of California’s anti-gay marriage law Proposition 8, is resigning as CEO of for-profit Mozilla Corporation and also from the board of the nonprofit foundation which wholly owns it.” – Recode.net

“In 2008, Barack Obama and Brendan Eich both were against gay marriage. Senator Obama averred his support for the one-man/one-woman view of marriage, while Mr. Eich, a cofounder of the Mozilla web-browser company, donated $1,000 to support Proposition 8 — a California ballot initiative that had the effect of making Senator Obama’s avowed marriage policy the law in California, at least until a federal court overturned it on the theory that California’s constitution is unconstitutional. Barack Obama inexplicably remains, as of this writing, president of the United States of America, but Mr. Eich has just been forced out as CEO of Mozilla because of his political views.” – National Review

“As one who has been a longtime supporter of gay marriage and remain one, allow me to say that I am appalled by Mozilla’s decision to fire (or ‘force to resign’) its newly installed CEO (and inventor of Java Script) Brendan Eich because Eich gave $1000 a few years back for Proposition 8, the California ballot initiative to ban same-sex marriage.” – Roger L. Simon/PJ Media

“As I say, put aside the argument, step back and view the thing at a distance. Support it or not, you cannot look at ObamaCare and call it anything but a huge, historic mess. It is also utterly unique in the annals of American lawmaking and government administration.” – Peggy Noonan/WSJ

“This week, a video has been circulating claiming to show a herd of bison ‘running for their lives‘ out of Yellowstone National Park. The suggestion has been that the animals are sensing imminent danger associated with a volcano in the area. But there’s just one problem: park officials told Reuters that the video actually shows the bison galloping into the park, not out of it.” – The Blaze

“So far, it’s been easy to dismiss weak economic news as the result of an awful winter. But those excuses ended with Friday’s March jobs report, the first of spring, which showed a lower-than-expected gain of 192,000 — Wall Street traders were looking for something closer to 300,000 — and an economy not losing speed but not exactly revving up for the run to the November midterm elections.” – POLITICO

“I would appreciate it if Bruce Braley would start pacing himself on the stupid things that he says: I don’t think that it’s fair to let one goofball monopolize my attention (and front page space).  We have quite a while before November hits, so there’s no reason why Rep. Braley can’t complete his self-humiliation in a measured and efficient fashion. ” – Moe Lane/RedState

“The State Department misplaced and lost some $6 billion due to the improper filing of contracts during the past six years, mainly during the tenure of former Secretary of State Hilary Clinton, according to a newly released Inspector General report.” – Washington Free Beacon

“Today’s moral lesson involves the 18-year-old Duke University freshman who has revealed that she is moonlighting in pornography movies to pay her outsized $60,000-a-year tuition at Duke.” – American Spectator

Interested in more national news? We've got you covered! See More National News
Previous Article The Leland Yee Arrest, As It Ought To Have Been Reported
Next Article SARGE: To Arm Or Not To Arm