Yesterday, SB 648 by Sen. Yvonne Dorsey-Colomb (D-Baton Rouge) came out of the Senate Committee on Revenue and Fiscal Affairs. If passed, it would continue the long practice of Baton Rouge’s “downtown crowd” to favor “connected” investors developing property in geographical areas favored by the power elite.

SB 648 establishes a special taxing district in a one-block area between North Boulevard and Convention Street, and 3rd and 4th Streets in downtown Baton Rouge. A Google map of the area in question… 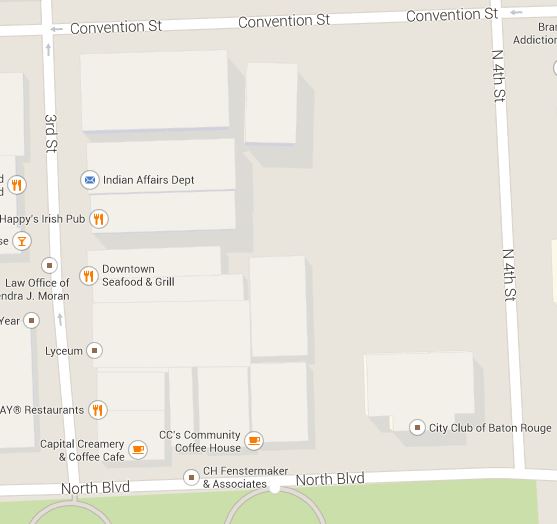 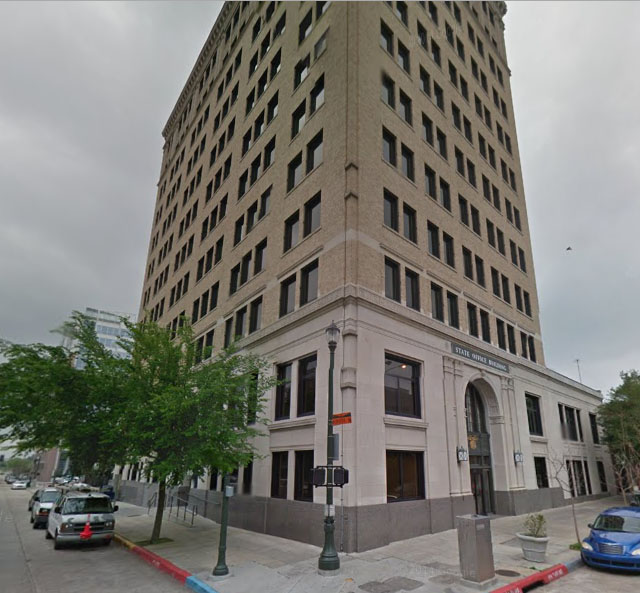 The building has an interesting history, one which has gotten even more interesting lately. It was originally built to house the Louisiana National Bank in the 1920’s, but as you can see from the sign in the front it’s been the State Office Building for quite a while. Currently, there are no state offices in the building.

Which is why the recent – very recent, in fact – history of the building is of concern here.

In January, the state sold the building for $10.2 million to the Baton Rouge Area Foundation as part of an asset dump intended to shore up a budget deficit.

And in February, BRAF sold the building to real estate developer Mike Wampold. The Baton Rouge Business Report had a blurb on that sale which revealed some peculiar information…

He tells Daily Report that he’s planning to turn the art deco-era building into either a residential development or a boutique hotel. “It was built in 1926 and has hand-painted murals throughout the first floor,” says Wampold. “It could be a really neat apartment building or a hotel or condos. We’re going to study the building and the market and see where things appear to be heading 24 or 36 months from now.”

And just a bit more…

At the time of the acquisition, BRAF said very little about its plans for the building, which, it is now apparent, included Wampold. Wampold declines to discuss the sale price, explaining that the deal was structured through BRAF because he intends to put the building, once improved, into a support foundation he established through BRAF in the name of his grandfather. “This is really a charitable endeavor,” he says. “When the hotel or whatever is developed, it will be placed in the Milford Wampold Charitable Foundation and all proceeds and profits will go to the benefit of that foundation.”

Two months later, we have a bill creating a TIF district for the hotel/apartment building project Wampold says is going into a charitable foundation under BRAF’s wing.

D. Governance.
(1) In order to provide for the orderly development of the district and effectuation of the purposes of the district, the district shall be administered and governed by a board of commissioners, referred to in this Section as the “board”, comprised of three persons as follows:

Those are some rather bilious and wide-ranging powers, and the bill doesn’t set much in the way of limits for the TIF district to eventually expand out of the box it’s being created in.

In fact, if you were going to consider this thing as a blob which might well eat all of downtown Baton Rouge there are people who would agree with you.

Notice also that the bill establishes a three-person governing board of the taxing district in question, which would include mayor-president Kip Holden, Baton Rouge mayor pro tempore Chandler Loupe and Metro Councilwoman Tara Wicker, or their designates. That looks an awful lot like a constant 2-1 vote where Loupe gets outvoted on all kinds of decisions which could have major importance to what properties in downtown Baton Rouge get swallowed up for favorable treatment on behalf of their developers…assuming the developers are connected with the right people.

In fact, it wouldn’t be all that out of line to wonder if this thing couldn’t eventually grab every currently-unused piece of land in downtown Baton Rouge so as to redevelop those properties under the TIF model – so long as friendly developers can be found to benefit from the financing.

Mike Wampold, whose reputation as a real-estate developer is outstanding and who has been responsible for bringing to life some of Baton Rouge’s best property, doesn’t need a TIF to finance the old LNB building into a hotel – and one could ask why, with four hotels in downtown Baton Rouge it’s necessary to put tax dollars at risk to finance the fifth. Wampold could certainly afford to put his own money at risk on this project.

And who will ever build a hotel in downtown Baton Rouge again without demanding that taxpayer-backed bonds fund their project?

For that matter, who will ever seek to build anything in downtown Baton Rouge without TIF financing? Consider this – we’re supposed to believe that somebody without political connections is going to put down millions of dollars to develop property in downtown Baton Rouge, in the knowledge that if his idea has merit the folks with political connections might very well jump in with their own investors, who are able to use BRAF either as a straw purchaser for land or some sort of partner giving their project a non-profit cover and then apply a TIF to finance their project, to compete against him.

In practice, nobody will do that. In practice, a bill like this will consolidate the property of downtown Baton Rouge in the hands of a connected elite. In practice, the only people who will develop property downtown will be people who know the mayor and the Powers That Be, and who can suitably kiss their rings.

Winners and losers will be chosen.

This isn’t the free market. This is a dangerous bill.