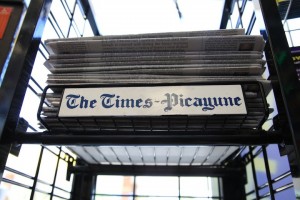 In an article published by the Times Picayune/NOLA.com, facts regarding the state’s school voucher program are misleading and construed to give the image that interest in the program is declining.

As noted by Louisiana Communications Associate for the American Federation for Children, Stephanie Malin, the Times Picayune report twists the facts in it’s headline that “interest from new participants has dropped.”

Here’s an excerpt from the report itself.

Louisiana’s high-profile school voucher program will almost certainly continue to expand in its third year, though interest from new participants has dropped. There were a total of about 12,000 applications to the Louisiana Scholarship Program for 2014-15 admission, said Education Department spokesman Barry Landry, which includes about 6,100 students who are continuing in the program. The 5,900 new applicants represents a 15 percent drop from the 7,100 applications last year.

About 90 percent of the current 6,750 voucher students are continuing in the fall, and 2,600 new students were matched with seats. That means total enrollment in the coming year could be as high as 8,700, which would be a 29 percent increase. Last year enrollment increased by 38 percent.

But, the numbers clearly show the opposite, as Malin points out to the Hayride. There were 700 more awards given to students this year than last year, a ten percent growth in the number of overall awards.

And the headline for the Times Picayune report “Louisiana voucher enrollment to expand as interest from new students declines” is even more misleading because it is in direct contrast with the potential 29 percent growth in the program from the first round application period alone.

The Times Picayune report states that there was a 15 percent drop in applications for this coming academic year when compared to last year. However, this is misleading as well, because it does not factor in the changes that have been made to the application process.

Applications for this upcoming academic year are much different from last year, as families had to be highly qualified to apply for the program, meaning not only were they required to meet certain financial and residency requirements, but parents were only allowed to submit applications to schools with open seats in their child’s grade level. The Times Picayune report does not mention any of these changes.

Also, the report states the following:

Louisiana is spending over $40 million this year to educate these children in private schools. Supporters tout the program as empowering parents to get their children out of failing public schools.

Later on, when mentioning the Department of Justice’s objections to the voucher program on the basis that it causes a racial imbalance, the Times Picayune failed to mention a previous report of theirs which found that the voucher program actually improved integration.