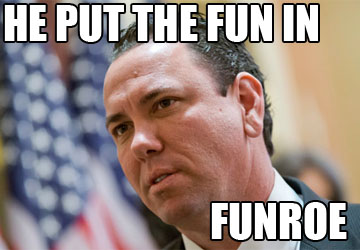 Soon to be outgoing Congressman Vance McAllister judgment as of late has been lacking though the freshman US Representative made the right, albeit tardy, decision to publicly declare that he would not seek re-election this November and that he would not leave office early by immediately resigning.

If Louisiana can handle the media circus that is sure to come in the event Edwin Edwards makes a runoff for Congress (add an extra ring if he runs first), then the state and for that matter the Republican Party can handle a disgraced and obscure north Louisiana congressman quietly finishing out his fractional term on Capitol Hill.

More importantly, McAllister’s decision has saved the taxpayers of Louisiana over $1,000,000.00 by not causing a second special election in six months.

Furthermore by allowing the 5th Congressional seat election to be held in November and providing advance notice about his intentions, aspirants will have ample time to organize and raise the funds necessary to compete in the sprawling district that touches four Louisiana media markets.

The shady manner in which the 5th District “became available” last year created a voter backlash that undermined the candidacy of the favorite (State Senator Neil Riser) and paved the way for McAllister’s surprise victory.

However some Republicans are not pleased by McAllister’s delayed departure.

Louisiana GOP Chairman Roger Villere had called for McAllister’s resignation in early April. After the congressman declared his intention to retire at the end of his term, Villere said that he “would have liked to see Rep. McAllister close this chapter sooner.”

“When we took the majority, I had said that I believe we ought to hold ourselves to a higher standard. And I think what has happened in his instance doesn’t meet the standard. So I told him that I thought he should resign,” said Cantor.

McAllister also spoke to the press after his meeting with the House GOP leader and reaffirmed his position stating that quitting wasn’t worth the cost of the special election and that his district deserved to have a voice up in Washington.

It’s worth noting that Cantor has a good relationship with his one-time Capitol Hill colleague Louisiana Governor Bobby Jindal, who had called for McAllister’s resignation not long after video of the northeast Louisiana congressman kissing someone else’s wife hit the internet.

Also worth noting: Cantor has yet to call for the resignation of New York Republican Congressman Michael Grimm, who is currently under federal indictment for something far more serious than making out with a married staffer (not that such behavior is acceptable).

“With Michael Grimm, he’s going to have to make his case to his constituents and make his case in court,” Cantor said. We’ll see which scandal the Party of Bill Clinton makes more hay over at the end of the election cycle.

McAllister’s presence in Congress is not going to be much of a distraction or impediment to the GOP’s drive to pick up seats in the favorable looking midterm contests.

With McAllister’s declaration being recent and a virtual political eternity between now and qualifying in August, the field for the re-opened congressional seat is tentative.
Thus far ex-District Attorney and unsuccessful candidate for Attorney General Ed Tarpley of sparsely populated Grant Parish is the only declared contender. Coming from the wrong part of the district (ask Clyde Holloway), Tarpley would have a difficult time mounting a challenge. If Riser, who positioned himself as an archconservative, jumps in again, Tarpley would have little chance.

Riser, who had benefited from Washington and Baton Rouge establishment support in addition to being the quasi-state GOP candidate, is mulling a second run. Riser would have almost certainly emerged victorious had the then-Congressman Rodney Alexander’s sudden retirement not seemed conveniently arranged and is without question the man to beat this November.

Several Democrats who ran last time are exploring the race, though the badly divided field in a special election led to an all-Republican runoff. One had to assume the Democrats have learned from their mistake and will rally behind a single candidate who will be assured of a spot in the December general election.

Two other Republicans are looking at the seat: West Monroe State Senator Mike Walsworth (an ally of Riser) and Monroe businessman Harris Brown, who has not been shy about his travels throughout the district.