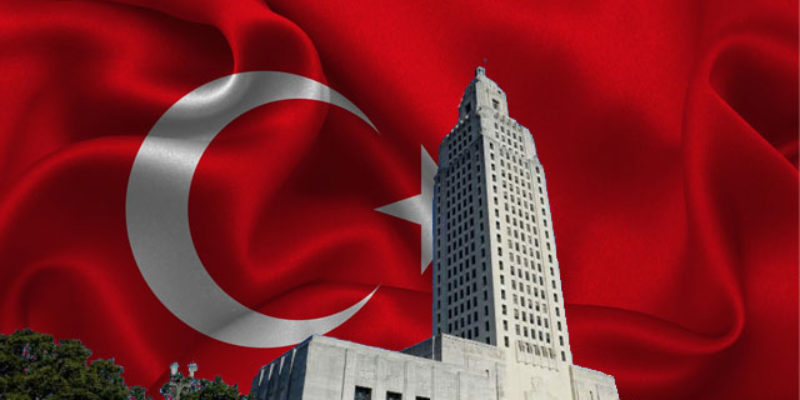 Y’all know that political grapevine thing, right? Now it’s sayin’ our esteemed elected-official people in the Louisiana legislature just got invited en masse (that’s French for all of ‘em) to take a trip to Turkey.

Before we get into just whether a Louisiana legislator should go to Turkey in the first place, it’s worth pointin’ out the details of this proposed junket:

Legislators will have to fork over for the airfare and an additional $300 for the trip. Get THIS: that $300 pays for NINE days of accommodations in 5-star hotels plus all meals, breakfasts, lunches and dinners and guided tours.

Do you reckon that all of this will be provided without any requests or solicitations down the road?

No. You don’t. You know there’s no such thing as a free lunch. Even if it’s dolma or kebabs.

To answer that, we oughta start off by pointing out that this invitation ain’t just for Louisiana leges by any means.  Actually, politicians from 35—THIRTY-FIVE—states have been invited on these trips.

That’s a whole shrimpboat load of money here to send politicians from around the USA on 10-day tours of Turkey, no? Them’s a lotta liras.

Who’s ponying up for all this?

A group called the Gulenists, that’s who. If you look at the invite that was sent around to our elected officials, one of the recommended books on the list is all about the Gulen movement.

You remember the Gulen movement, right? All them knowledgeable people on this site have written up those guys.

They like to portray the head of that movement as a warm and fuzzy character, but he ain’t so warm. Fuzzy, maybe, but he’s written some really disturbin’ stuff and all indications are his guys control the national police in Turkey that used water cannons against demonstrators there not all that long ago.

Why do you suppose that guy is spending boatloads of money to bring American politicians to Turkey at deep discount rates that you and I could never get?

They say they want to promote cultural and commercial ties between Turkey and Louisiana, but ya’ gotta wonder why they’re willing to spend all this money to do that. Cuz no other foreign outfit in the world pays for bunches of trips like this. Only the Gulenists do.

The invite to our legislators lists “topics of interest” on the trip, including the “democratization process in Turkey, Turkey’s entry into the European Union (and) its role in…the peace process…in the Middle East.”

Except none of that stuff is actually happening, mainly because of Turkey’s ruler, a guy named Erdogan. If you look at what’s been going on in Turkey, you can’t help but realize that Turkey is no friend of ours since the Islamists took over. Here are the details from a white paper published by one of them think tank outfits:

The nation of Turkey has been conducting a very sophisticated, expensive outreach program to elected officials across the United States, bringing many of them on trips to Turkey. American elected officials may not be aware of the troubling policies and international ties and activities of the Islamist regime of Prime Minister Recep Tayyip Erdogan. Turkey may be a beautiful country with many great people, but before anyone accepts a trip to Turkey, there are some facts they should know:

Clearly, Turkey’s outreach to US politicians on cultural and economic ties are not the only such overtures by the Erdogan regime. While contemplating accepting such invitations, US elected officials should be aware that their counterparts in the Islamic Republic of Iran are receiving similar overtures.

Here’s a copy of that invite, by the by. A few state reps freaked out when they saw this thing going around. But apparently a bunch of ’em are going.

One thing interesting about all this is that there was a bill voted on in the House yesterday that woulda made those Atlas Foundation people playin’ travel agent for the leges none too happy. The bill is HB 1282, by Rep. Valerie Hodges, and it flew through on an 89-0 vote.

The deal with the bill is that it would ban any kinda discrimination in the hiring of teachers for charter schools. Well, yeah, you say. No kiddin’. Discrimination’s bad.

Why this is a thing is that when the Atlas Foundation runs charter schools, they bring in a bunch of Turkish dudes to teach in ’em. And the Turkish dudes all get those H-1 visas to come teach in those schools.

The charter school these cats operate in Louisiana is Kenilworth Science and Technology School in Baton Rouge. Which got raided by the FBI in December, and we still dunno why. There’s some speculation that what’s goin’ on is the Turkish dudes they’re hirin’ are happy to make 15K a year but the state is payin’ for charter school teachers to make 45K a year or thereabouts, so the racket is that the Turkish dudes gotta kick back half their salary to Atlas, or whoever else.

We dunno whether that’s the case, but to attack that you pass a bill which says you can’t discriminate in hirin’ teachers at charter schools. And that means no hirin’ Turkish dudes when perfectly good Louisiana dudes – or Louisiana chicks – will come work for you.

And what this means is you got a buncha leges who just voted to make it harder to bring in the Turkish dudes, and now they’ll be doin’ Turkey for $300.

You might wanna be uncomfortable about this, but on the other hand ain’t nobody better at stickin’ a fork in somebody than a Louisiana lege. They oughta remember that when they’re stuffin’ these guys full of baklava and kibbis next month.