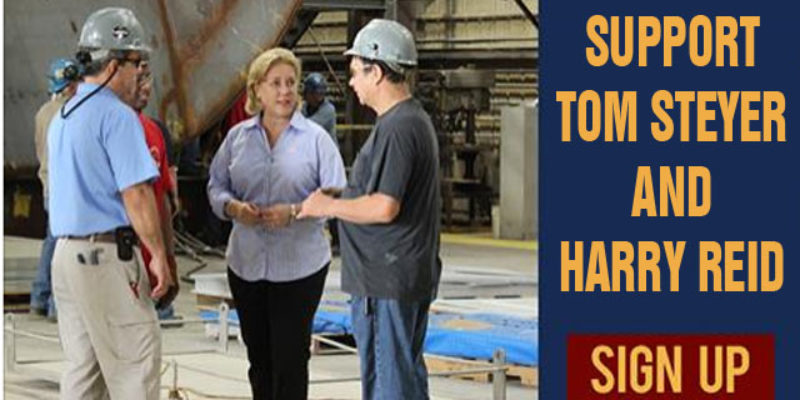 The Wall Street Journal has an interesting piece today about NextGen Climate, the environmentalist PAC set up by billionaire hedge fund hypocrite Tom Steyer. It appears that the only states where NextGen will be playing are states currently held by Dems where climate-change loons aren’t being hunted with dogs.

And that doesn’t include Louisiana.

On Wednesday Mr. Steyer’s environmental group, NextGen Climate, revealed that it will be targeting just four U.S. Senate races as it draws on the $100 million that Mr. Steyer has pledged to raise to promote green candidates. Perhaps that is because there are very places where voters are looking for such candidates. A March Gallup poll finding that most Americans worry about climate change “a little” or “not at all” is consistent with other surveys showing that the issue is not even close to being a top priority for U.S. voters.

And of course among the large majority who don’t consider it a priority, many are vehemently opposed to the idea of making energy more expensive. The Journal notesthat the potential populist alternative to Hillary Clinton for the 2016 Democratic presidential nomination is former Montana Gov. Brian Schweitzer, who runs a mining company and maintains “a big appetite for oil and gas exploration.”

In choosing to spend money in just Colorado, Iowa, New Hampshire and Michigan, Mr. Steyer’s NextGen is steering clear of most of the battleground states that will decide control of the U.S. Senate. The organization says that it wants to bring the climate issue “to the forefront of American politics” and presents itself as an opponent of “special interest groups” but it seems to be taking pains to avoid the many places where general interest groups, i.e. voters, favor cheap energy. The group apparently has no plans to play in tight races in Alaska, Arkansas, Georgia, Kentucky, Louisiana, or North Carolina, partly because in many of those places even Democratic candidates are at least pretending to favor energy production.

Considering that Steyer is now joined at the hip with Senate Majority Leader Harry Reid, who he bought with a $5 million donation to Reid’s Senate Majority PAC recently, it might not be completely true that he’s not helping Landrieu. Reid is pouring Senate Majority PAC dollars into Louisiana like a drunk hitting 18’s at the blackjack tables at Harrah’s New Orleans, so surely some of Steyer’s money will end up on TV in the Bayou State.

But it won’t have Steyer’s name on it. And why? Because Tom Steyer wouldn’t be a very popular figure if Louisianans knew who he was, and the more prominent role he plays in Landrieu’s race for re-election the worse it will be for Landrieu.

Everyone involved knows this.

After all, Landrieu’s record of ineffectiveness in trying to get the Keystone XL pipeline finished – when Steyer has pledged $100 million to buy Democrat politicians who’ll prevent that from happening, including Reid – wouldn’t be helped if it was known she was being aided by his money. One could come to the conclusion Landrieu’s lack of deliverables on Keystone XL is a product of insincerity on her part should Steyer’s millions begin to play a prominent role in the campaign.

After all, Steyer’s old hedge fund Farallon Capital has a significant stake in the Trans-Mountain Pipeline, which is a proposed vehicle that would transport Alberta tar sands oil not to refineries on the Gulf Coast, but to oil tankers in Vancouver which would carry it to China. Of course Steyer wants to kill Keystone XL. Anyone who thinks his opposition is based on environmentalism is a fool.

It should be considered also that Steyer has thundered away at the American coal industry – but Farallon is one of the largest investors in coal production and power in Asia and Australia. He might have made a big show of “instructing” his employees to divest him of “dirty” fossil-fuel investments, but he’s provided little if any proof that has actually happened, and given that his environmentalist activism, were it to bear fruit, would serve to increase the value of his fund’s investments there is zero reason to believe anything Steyer says. The only reasonable conclusion anyone can make about this man is that he’s trying to use the levers of political power to fatten his wallet.

And that’s why Landrieu wants him as far away from her re-election campaign as possible. She can’t even attack Steyer for the insincerity and crony-capitalism of what he’s doing, since she has Boysie Bollinger, who depends on Landrieu’s good graces and influence on the Appropriations and Homeland Security Committees for continued contracts to build Coast Guard cutters, appearing in her TV ads.

She’d just rather not talk about Harry Reid or Tom Steyer, or much of anything else in the line of where the money is coming from to help her re-election effort. Landrieu’s problem is the rather small amount of material she actually would like to talk about. Polls show it might not be enough to get her re-elected.