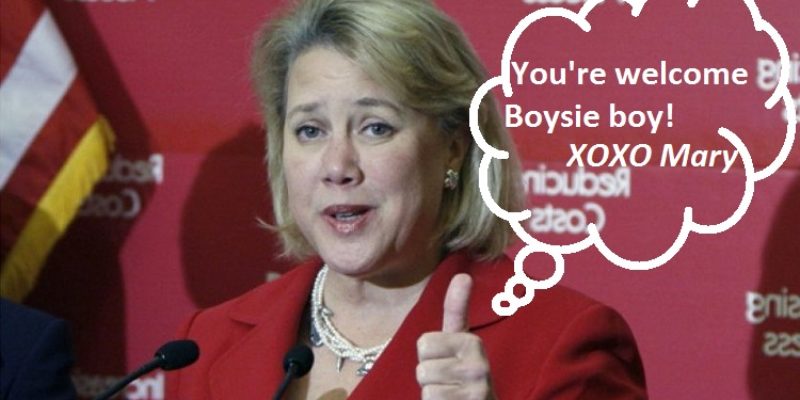 Vulnerable Democrat Sen. Mary Landrieu (D-LA) has quite the relationship with Republican donor and CEO of Bollinger Shipyards, Donald “Boysie” Bollinger. But not the typical secret love affair. This political affair is all about the dollar signs, millions to be exact, that Landrieu funnels to Bollinger. And in return, Bollinger makes cameos in cheesy political ads for Landrieu. Here’s the run down:

Landrieu just pushed a spending bill through her Appropriations Subcommittee that will funnel $318 million “for six Fast Response Cutters (FRCs), which are built at Bollinger Shipyards in Lockport. Landrieu said the funding would keep 3,000 people working at the shipyard.”

“We must replace the Coast Guard’s aging fleet for it to keep carrying out its vital role in protecting our nation,” Landrieu said. “Today’s funding will provide the Coast Guard with these exceptional boats, allow the Coast Guard to carry out critical lifesaving, law enforcement and homeland security missions and support 3,000 jobs in Southeast Louisiana.”

Conveniently, this is not the only money Landrieu has funneled to Bollinger. While Bollinger claims that Landrieu must be re-elected, instead of being ousted by challenger Rep. Bill Cassidy (R-LA), because she is the “chairman of the Energy Committee, the most powerful position a person can have for Louisiana,” Boysie is reaping the benefits thanks to Landrieu.

Landrieu may be the most powerful politician in Washington D.C. for Bollinger because she has continued to fund his shipyard with federal dollars, no matter the cost.

As noted previously, Landrieu has funneled hundreds of millions of dollars into Bollinger’s shipyards in order to help build Coast Guard cutters. And, despite being sued by the Obama administration and Department of Justice (DOJ) for recoupment of money for eight vessels the company worked on but later proved unseaworthy by the Coast Guard, Landrieu continued to help funnel millions to Bollinger.

Landrieu has always backed Bollinger, even when he and his company got into trouble with the law.

In April 2014, the DOJ asked that the 5th circuit court of appeals asked that the lawsuit be reinstated, saying that Bollinger misrepresented the boats it had worked on. The request came after US District Judge Sarah Vance dismissed the case a year before.

The DOJ was also seeking restitution for the $78 million taxpayers had paid “at every turn Bollinger assured the Coast Guard that the strength of the patrol boats’ hulls would far exceed’ requirements.” The DOJ also said that in an email from 2002, Bollinger had led the Coast Guard to believe that the patrol boats were twice the strength that was required. Meanwhile, Landrieu was still funneling millions to Bollinger.

When Bollinger first came out in support for Landrieu, via a political ad for the longtime Democrat, Cassidy said the ad was evidence that Landrieu feeds into crony capitalism that Washington is filled with.

“I believe this is exactly what’s wrong with Washington. We need fairness and a level playing field for all; not a Washington insider’s system, like Senator Landrieu’s, where only those in government or those with enough money are the winners,” Cassidy said.

And though Landrieu’s Campaign Manager Adam Sullivan has said that she has “delivered billions of dollars to Louisiana that have helped create thousands of high-paying jobs,” he conveniently does not mention that one of the biggest   beneficiaries of Landrieu’s chairwomanship and committee positions is the man behind the shipyards, Boysie Bollinger.