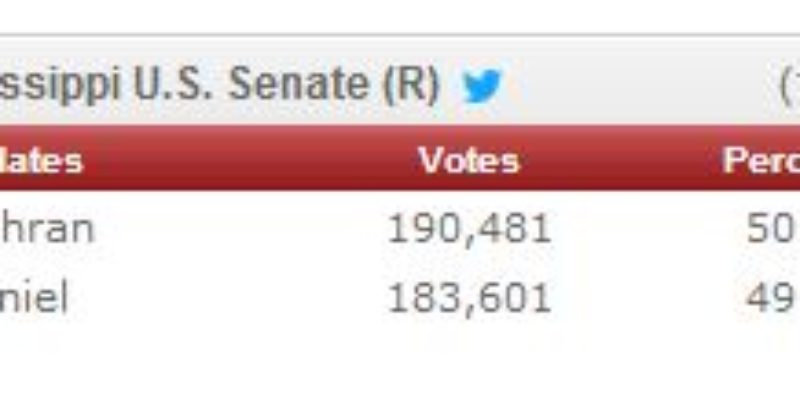 “For what shall it profit a man, if he shall gain the whole world, and lose his own soul?”

We were wrong about the Mississippi Senate race.

We didn’t believe that Thad Cochran’s gambit to “expand the electorate” by spreading street money into the black community in an effort to have Democrats decide a Republican primary was more than a desperate, disgraceful ploy which would turn off more Republican voters than it would gain Democrats.

We were in the majority in that belief, but tonight we’ve got to eat crow.

The race was close, and McDaniel might well challenge the results to see if by getting illegal votes thrown out he can make up those 6,900 votes he lost the race by. In that he might be able to gain a little traction, seeing as though a vote would be illegal if the vote had cast a ballot in the Democrat primary three weeks ago and then voted for Cochran tonight. It’s conceivable Cochran might have drummed up 7,000 or so of those.

Realistically, though, if you think the Haley Barbour machine which controls Mississippi the way Tammany Hall controlled New York or Huey Long controlled Louisiana will allow Cochran to be unseated in a court challenge or a recount, you need drug rehab.

Cochran was able to effectively steal the race away from the wishes of a majority of Mississippi’s Republicans. The question is whether he’ll escape punishment from them in November, when a Democrat challenger in the name of former congressman Travis Childers awaits. He’s going to have to turn out a whole lot of McDaniel voters, which is going to depend on McDaniel’s endorsement of him.

If I’m McDaniel, that endorsement will require a very, very difficult bargain on Cochran’s part. McDaniel owes him nothing but the back of his hand, and he owes the Barbour machine, which repeatedly smeared McDaniel as a racist, even less.

But just more than half, including several thousand bought-and-paid-for Democrats, disagree.

It should be mentioned that the National Republican Senatorial Committee spent some $175,000 trashing McDaniel in the race, something which was gratuitous and disgraceful. The NRSC doesn’t deserve support from Republican voters anymore – it’s an incumbent-protection racket which protects the least-deserving of its flock and resists improvement in the GOP caucus in order to safeguard the sinecures of mediocre leadership.

As for Cochran, he’ll be gone from the Senate inside of two years. He wasn’t going to even run for re-election, but the Barbour machine talked him into doing it because they didn’t have a candidate they were comfortable could beat McDaniel in a primary. With Cochran winning, the Barbour machine will appoint his replacement. We’re for doing away with the 17th Amendment, which provided for direct election of senators, but we’d like to see it repealed in a bit more above-board fashion.

So Mississippi’s voters will end up with two senators who weren’t elected when they joined that body. The other senator, Roger Wicker, was also appointed.

There is nothing positive to say about tonight’s result in Mississippi. It serves to prove something we would rather not believe; namely that the road to political victory runs through the sewer, and the victor is usually the candidate willing to dive deeper into the muck than his opponent.

It’s harder and harder to deny this. At this point we can only apply the knowledge it imparts to us, and demand that the political process has as little effect on our lives as possible. A government populated by people who explicitly defecate on their principles is not a government worthy of our fealty or unquestioned obedience.

But that’s the government we have. It’s full of Thad Cochrans. And it will be until a majority of us are willing to change that.

That majority doesn’t exist. Especially not in Mississippi.