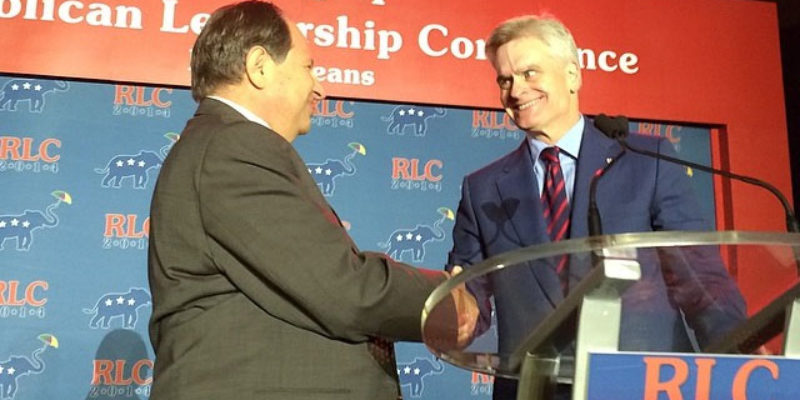 This weekend’s RLC 2014 confab in New Orleans didn’t go as planned for the Rob Maness campaign.

The festivities opened on Thursday with former Alaska governor and 2008 GOP vice-presidential candidate Sarah Palin appearing in support of Maness and the insurgent Republican candidate giving, at least in the estimation of the Times-Picayune’s James Varney, the best speech of his year-long candidacy.

But by Friday, the momentum had changed. It started when, in the green room at the event, Maness asked billionaire financier Donald Trump for his support. That request didn’t go particularly well; Trump chided Maness about the fact he claims only about eight percent of the vote in the most favorable polling, and suggested he get out of the race. When Maness protested, we’re told by a couple of people who were there, Trump threw his hands up, exclaimed “What do I know about Republican politics?” and stormed off. Trump then disparaged Maness’ candidacy in a press conference and suggested in a more public manner that Maness quit the race with the additional spice of intimating that Maness is helping Mary Landrieu hold the seat for the Democrats.

Also on Friday, Sen. David Vitter publicly reiterated his endorsement of Rep. Bill Cassidy as the Republican challenger to Landrieu.

And on Saturday, a more substantial rejection: Louisiana GOP chairman Roger Villere took to the podium in the main hall and announced, in introducing Cassidy, that the LAGOP executive committee had unanimously voted to endorse the congressman as its choice against Landrieu.

In announcing the endorsement, Villere noted that it’s rare for the state GOP to get involved in a race involving multiple Republicans – the last time it was done was the 2007 governor’s race when the party endorsed Bobby Jindal – but a majority of the members of the state central committee voiced support for a Cassidy endorsement in writing, and therefore the executive committee voted to execute the endorsement per party rules. Because they’ve made it official, the LAGOP is now empowered to bring some resources to the table in the race.

Villere’s big splash came shortly after a breakout session outside the main hall when Shreveport-based conservative activist C.L. Bryant, who will debut a radio show at the end of June, gave what amounted to at least a hypothetical call for Maness to exit the race. Bryant said that if the presence of multiple Republican candidates in the race served to help Landrieu’s re-election chances, then conservatives should go to those candidates and ask them to get out so as to unite behind one candidate in the task of beating Landrieu.

So what started with Palin’s supportive appearance ended with a rejection of Maness’ candidacy by some rather heavy hitters.

The going looks like it’s going to get rougher for Maness from here, and he’s getting an increasing amount of pushback as the race heats up.

That pushback is going to include some existential questions for the Maness campaign going forward.

For example, what is Maness’ scenario for victory at this point? He is – at best – holding eight percent of the vote. Cassidy is somewhere between 28 and 45 percent, depending on the survey, and Cassidy is either even with or ahead of Landrieu in head-to-head polling.

He’s going to have trouble convincing anyone that he’s a better bet to knock Landrieu off than Cassidy is. In fact, that argument is all but settled given that the state central committee, which is about as good a representation of activist conservative voters as you’re going to find in Louisiana, has voted to go with Cassidy.

And if he can’t win that argument, then what?

Certainly there should be an ideological component to this election. But there’s a problem: this isn’t a GOP primary in which the question of whether Bill Cassidy is suitably conservative to carry the banner; it’s a jungle primary in which there is only one Democrat candidate – the incumbent – in the race. And so without that party primary, where the ideological fight can be had, the only real consideration for Republican or conservative voters is our first question: who gives the Right the best chance of beating Landrieu?

Does Maness now attack the state party for endorsing Cassidy? Does he play the “RINO Establishment vs. grassroots/Tea Party/conservative base” card?

The Louisiana Republican Party might not be perfect, but absolutely nobody thinks there is some RINO Establishment cabal among the party leadership. They’re not refusing to back Maness because he’s too conservative for them – frankly, you really can’t get too conservative for most of the people on the State Central Committee. No, the reason why these people are not backing Maness is that none of them know Maness. This is a state where some 80 percent of the people who live here were born here, and Maness just got here after spending most of his life in the Air Force living all over the place. That’s certainly not a character flaw for Maness, but nobody knew who he was until he started running for a statewide office. People who don’t know you and have no connection to you aren’t going to drop everything and put you in the U.S. Senate above a sitting incumbent and a well-funded and fairly popular U.S. congressman with a decent voting record.

That’s a very hard sell, and Maness hasn’t made it to the state central committee members. Several of them I talked to say he’s never reached out to them personally for support, and that they don’t know of anybody he has reached out to. And few of them have said they can say they know him.

Maness’ interactions with the state central committee at its official meetings haven’t been particularly productive, either. He enraged many of them back in January when, after Cassidy took his turn addressing a quarterly meeting (Maness had his turn at the October meeting), Maness put out a press release with a rather blatantly false representation of what Cassidy said. Video of Cassidy’s statements bore out the falsity of Maness’ characterization and undermined his credibility with the party’s activists.

At some point, it was inevitable that consequences would result.

Meanwhile, Cassidy’s camp has been romancing SCC members on a personal basis, with the congressman working the phones himself to gain their support.

That’s called working the process. Cassidy has done it successfully, Maness has not.

Now, this post is not going to join Trump and Bryant in suggesting or demanding Maness get out of the race. If he wants to stay in it, he should. He seems to have enough money to carry his election through to November if that’s what he wants, and whether he stays in or gets out is his decision.

But what Maness can’t do and escape a due degree of condemnation is turn his campaign into an attempt to burn down Cassidy and the LAGOP in retaliation for their not supporting him in the first place, when his infirmities as a candidate have nothing to do with ideology.

And Maness especially can’t go around calling all these people RINO’s when they’re actively out there running Democrats out of office and moving Louisiana to the right faster than any other state in the union even despite problems like not having party primaries and there being an overabundance of faux-Republicans like Buddy Caldwell and John Alario and the St. Tammany courthouse crowd to deal with.

Let’s remember that the LAGOP offered no resistance to the Tea Party movement when it surfaced, warmly embraced it, absorbed a bunch of its leaders and has worked with it enthusiastically with a couple of minor exceptions having to do with Ron Paul’s 2012 presidential run. The idea that Charlie Crist/Carly Fiorina fanbois are keeping Rob Maness from his rightful destiny as the GOP standard-bearer isn’t going to convince a soul within the party activists a Republican has to have to win an election in this state.

And if that’s where Maness is going to go from here on out, then yeah, Trump was right, he really should get the hell out of the race.

On the other hand, if Maness wants to stay in the race and he’s willing to use his resources and messaging to prosecute Mary Landrieu’s record and make the case for why she needs to be sent packing, and run a campaign that actually furthers the cause of beating her, then he has the opportunity to parlay this race into a political future even if the Senate race doesn’t pan out for him. It’s no secret that the Louisiana legislature needs a greater infusion of conservatives, and it’s becoming even less of a secret that Maness’ home in St. Tammany Parish, supposedly the most conservative in the state, is more in need than most. He has an opportunity to attract some support as a candidate for the Louisiana Senate or House next year, and could well emerge as a force in that legislature which might lead somewhere in state politics.

That seems to be his choice at present. The state party has already made its choice.