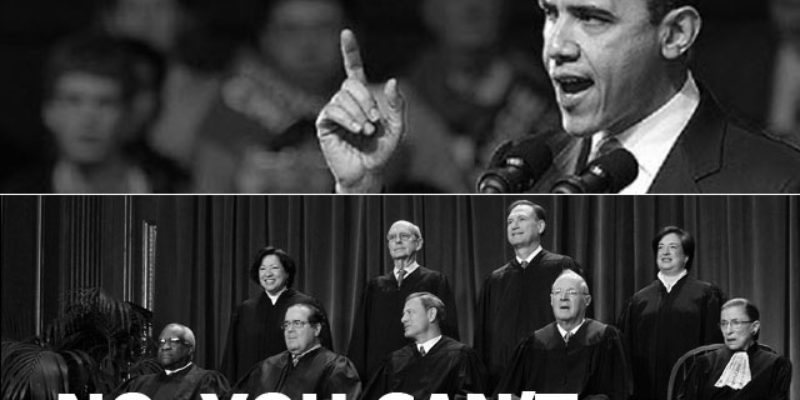 Today’s announcement of the Supreme Court striking down the Obamacare birth control mandate in the Hobby Lobby case is generating a great deal of reaction, as it should.

The Hobby Lobby ruling is a big deal. It signifies that privately-owned businesses have the right to express religious views. Which is something that would appear so obvious as not to require the Supreme Court to articulate it, but in 2014 we can’t take much of anything for granted where religious liberty is concerned. And the Hobby Lobby case also signifies that the federal government can’t force privately-owned companies to pay for things which violates their religious beliefs.

Those are important precedents, and they build on a good deal of work this Supreme Court has done in paring back the Obama administration’s usurpations of power.

But in all of the recent Supreme cases, the rulings have been narrow. That’s true of Hobby Lobby as well…

The justices said Monday the ruling applies only to corporations that are under the control of a family or just a few people in which there essentially isn’t a difference between the business and its owners.

“The companies in the cases before us are closely held corporations, each owned and controlled by members of a single family, and no one has disputed the sincerity of their religious beliefs,” Alito wrote.

The decision is limited to the contraception mandate, with the justices saying that businesses cannot opt out of Obamacare entirely on religious grounds.

So it doesn’t kill Obamacare, and it doesn’t blow up the government mandates inherent in it.

As such, as great as Hobby Lobby is, it really only nibbles at the edges of Obamacare. If you own a company, you can infuse your religious beliefs into that company – and if those beliefs collide with the federal government’s attempts to dictate your behavior, you can win that fight.

But for regular folks who would prefer not to do what the government doesn’t have a constitutional right to force you to do, this ruling isn’t a game-changer.

Ditto for the Supreme Court’s other big  case decided today. In Harris v. Quinn, eight people providing home health care for relatives in Illinois sued to overturn a state law which forced them to pay union does to SEIU as a condition of receiving public health care dollars, and they were successful. But it was a narrow ruling…

Union leaders had feared that the justices might strike down those state laws as unconstitutional. The justices did not go that far. They issued a more narrow ruling that the home health care workers at issue in the case are not “full-fledged public employees” because they are hired and fired by individual patients and work in private homes, though they are paid in part by the state, via Medicaid.

Because they’re not truly state employees, the justices decided workers did not have to pay union dues.

But writing for the majority, Justice Samuel Alito sharply criticized a 1977 precedent, known as Abood, that granted states the right to compel union dues. Alito called that ruling “questionable” and “anomalous,” all but inviting a further challenge in the future. He was joined in his opinion by Chief Justice John Roberts and Justices Clarence Thomas, Antonin Scalia and Anthony Kennedy.

A future decision to overturn Abood could decimate union finances and membership.

The Center for Individual Rights hopes to give the court a chance to overturn Abood next year. The conservative nonprofit law firm is representing several California teachers suing to get out of paying union dues on First Amendment grounds. That lawsuit is pending before the Ninth Circuit.

We saw two years ago that relying on the Roberts court to transform the relationship between government and the individual, or to fully roll back the federal government’s attempts to redefine that relationship, isn’t a good idea. But what we can see is that court will whittle away at the edges of government overreach. And that will have to be enough.