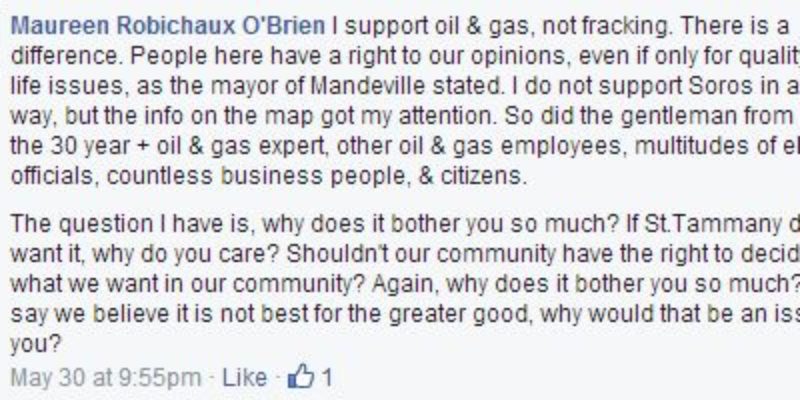 I didn’t pull too many punches, but it could easily have gone 3,000 words. It’s hard to write a short piece about the anti-fracking stupidity on the Northshore without using profanity.

The sudden surrender to anti-fracking hysteria in St. Tammany has taken both the oil industry, which has largely won the argument on hydraulic fracturing across the country, and the state’s GOP leadership by surprise. Until the end of May, many of the more prominent conservative activists in the parish had no idea there was serious opposition to energy exploration. After all, St. Tammany has several dozen oil wells already in and out of operation, though prior to the Tuscaloosa Marine Shale find it had been some twenty-five years since the last one was drilled.

But after a few town hall meetings the anti-frackers and some members of the council, including O’Brien, Marty Gould (a river pilot), and Jake Groby (the manager of a wastewater plant in neighboring St. Bernard Parish; Groby cites this experience as evidence he understands geology), have convinced the parish’s political class and some sizable portion of the public that fracking Poitevent’s well would foul the water supply.

Interestingly, these “conservative Republicans” are to the left of President Obama’s former EPA secretary Lisa Jackson, who was quoted on several occasions as saying there is no evidence of hydraulic fracturing contaminating the water supply. “I’m not aware of any proven case where [hydraulic fracturing] itself has affected water,” Jackson said in May 2011. And in April 2012, Jackson said, “In no case have we made a definitive determination that [hydraulic fracturing] has caused chemicals to enter groundwater.”

A couple of weeks ago, Maureen O’Brien – who’s more or less the ringleader of the St. Tammany anti-fracking mob on the St. Tammany Parish Council – went up on Facebook with a map of “fracking accidents” she found at the website of EarthJustice. If you don’t know who EarthJustice is (though one suspects the name alone will give you a good indication of what they have on offer), here’s a bit of information courtesy of Discover The Networks…

Earthjustice describes itself as a nonprofit “law firm for the environment” that works through the courts to “safeguard public lands, national forests, parks, and wilderness areas; to reduce air and water pollution; to prevent toxic contamination; and to preserve endangered species and wildlife habitat.” The organization’s professed raison d’etre is: “Because the earth needs a good lawyer.”

Earthjustice was founded as the “Sierra Club Legal Defense Fund” (SCLDF) in 1971 by Don Harris and Fred Fisher, two volunteer attorneys for the Sierra Clublegal committee. The fledgling organization was fully independent from the Sierra Club, with its own Board of Trustees, staff, and contributors. SCLDF adopted the name “Earthjustice” in 1997, “to better reflect our role as a legal advocate for not just the Sierra Club, but hundreds of others clients as well.” Earthjustice now has regional offices in Montana, Colorado, Hawaii, Alaska, California, Washington State, and Washington, DC.  The group also runs a law clinic at Stanford University, where it “offers students an opportunity to provide legal and technical assistance to nonprofit organizations on a variety of environmental issues …”

Earthjustice seeks to place severe restrictions on how U.S. land and waterways may be used. It also opposes most mining and logging initiatives, commercial fishing businesses, and both the practical and recreational use of motorized vehicles in undeveloped areas. The organization brings lawsuits against U.S. government agencies and corporations it believes are breaking or attempting to roll back federal and state environmental laws. “Environmental litigation,” says Earthjustice, “has been key to preserving threatened natural resources and protecting people’s environmental rights.” Claiming that its lawsuits have protected “millions of acres of wilderness,” Earthjustice has provided free legal representation to more than 600 client organizations, including the American Friends Service Committee; Defenders of Wildlife; Earth Island Institute; Environmental Defense Fund; Friends of the Earth; Greenpeace; the National Wildlife Federation; the Natural Resources Defense Council; Public Citizen; the Sierra Club, the Union of Concerned Scientists; the U.S. Public Interest Research Group;Waterkeeper Alliance; and the Wilderness Society.

Earthjustice’s “Responsible Energy” campaign litigates against efforts to extract oil, gas, and coal from U.S. public lands. In November 2004, Earthjustice joined a coalition of environmental activist groups (including the Alaska Wilderness League, Defenders of Wildlife, the National Audubon Society, the National Wildlife Federation, the Sierra Club, and the Wilderness Society) opposing any future U.S. House and Senate approval of oil drilling in Alaska’s Arctic National Wildlife Refuge (ANWR).  According to Earthjustice, “The administration of George W. Bush has been in a class by itself. It is not only hostile to efforts to protect the environment, but also staffed by a host of people who worked — and in all likelihood will again work — as lobbyists, lawyers, and employees of the very industries they are supposed to regulate.” By contrast, Earthjustice lauded former President Bill Clinton — chiefly for his Roadless Area Conservation Rule, which sought to restrict the construction of roads on public land. The group also praised Clinton for establishing new national monuments, including the Canyon of the Ancients in Colorado and the Grand Canyon-Parashant in Arizona. Earthjustice did not criticize Clinton’s support for the 1995 “Salvage Logging Rider,” a logging initiative that sought to double the amount of logging done on U.S. national forest land by excusing the sale of timber from environmental regulatory laws.

She obviously doesn’t have much of a clue about the oil and gas business she says she supports – since there are damn few oil and gas wells drilled nowadays which aren’t fracked. If you don’t support oil and gas, then what you support is oil and gas wells which don’t produce as much as they otherwise could.

The EarthJustice map in question can be found here. It considers as “fracking accidents” things like pipeline leaks and brine spills from wastewater (wastewater from fracking operations is collected and reused now), but it was presented by O’Brien to her Facebook audience as a catalogue of the Parade of Horribles that would happen to the Southern Hills Aquifer under their feet.

But to answer the question, the anti-fracking rubes and goons in St. Tammany are assaulting the property rights of their neighbors. If you own land out in the sticks, right now the primary economic value of that land lies in the mineral rights attached to it in the event there is oil and gas under your feet. And when bored housewives and goofball “conservative” politicians ginned up by the Hard Left environutters conspire to deny you the use of those mineral rights, your property rights are at issue.

That’s why what they’re doing in St. Tammany is unacceptable. That, plus the fact that if we don’t get oil from the Tuscaloosa Marine Shale we’ll have to get it from someplace else, and history indicates that someplace is probably run by Russian nationalists, Muslim sheiks, Latin American caudillos or some other incarnation of scum of the earth. Energy security is probably the most important piece of America’s future if we want to remain a world superpower, and a bunch of moron politicians mugging for the TV news are doing the work of our enemies for them.

I’m boycotting St. Tammany Parish until the idiocy over there stops. I encourage our readers to do the same.