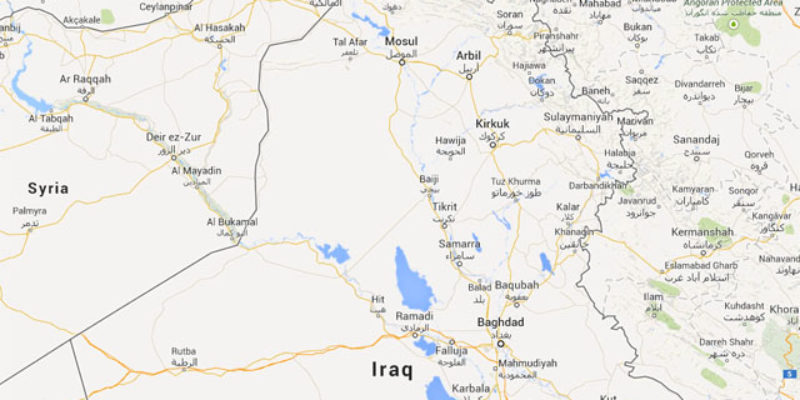 The news from Iraq over the weekend isn’t good.

Early this morning Tal Afar fell to ISIS, the Sunni Islamist army which essentially turned nomadic after failing to dislodge the Assad government in Syria. Tal Afar, as you’ll can see on the map above, is just west of Mosul along the road to Syria. With Tal Afar out of the way, that road is now wide open for ISIS to consolidate control of its territory from eastern Syria to northern and western Iraq.

They’re going to control the Sunni areas of Iraq and join them to the parts of Syria they control, and the result will be a terrorist state so vicious that they spook Al-Qaeda.

And it’s a terrorist state with lots of American weapons. Here’s CBS’ Lara Logan to explain the situation…

What to do? Apparently, break bread with Iran…

Secretary of State John Kerry said Monday the United States would give “a very thorough vetting of every option that is available,” to quell a worsening conflict in Iraq, including drone strikes and cooperating with Iran.

Kerry told Katie Couric in a Yahoo! News interview that he doesn’t think the Sunni insurgents creating havoc in Iraq will take Baghdad in “the near term,” but “when you have people murdering, assassinating in these mass massacres, you have to stop that — from the air or otherwise.”

Unless we conduct a full-fledged alliance with the Iranians, something that would surely destroy any credibility this administration has left (what effect on our relationship with Israel, the only country worth being allied with in the region, would a U.S.-Iranian alliance in Iraq have?), there is no retaking the Sunni areas ISIS has conquered. Iranian troops and Shiite militias will likely hold Baghdad and points south and east, but it’s clear the Iraqi army doesn’t have the discipline or fighting spirit necessary to conduct a proper offensive.

Where does ISIS get its supplies and materiel? Besides looting what America left behind, that is.

That’s a good question. The answer is Qatar, Kuwait and Saudi Arabia, though the official Saudi position is to oppose ISIS.  The Saudis are allowing their oil sheikhs to fund ISIS, which also controls oil fields in northern Syria they’re now using to fund their war effort.

ISIS is working to establish an Islamic caliphate in the areas they control, and as brutal as they are they’ve got lots of support among the Sunnis across the Arab world to do just that.