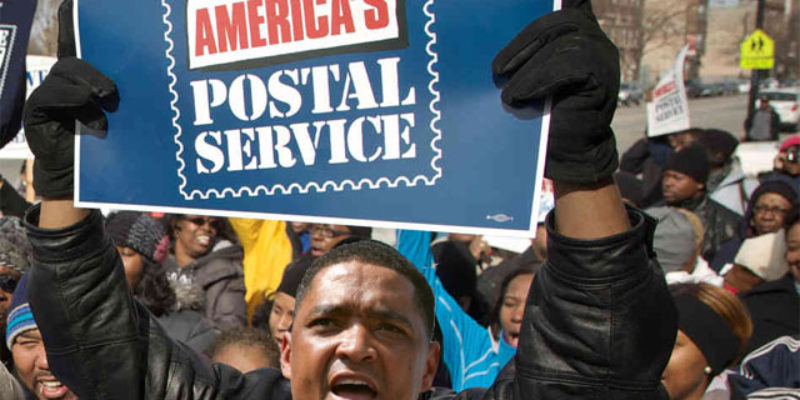 Our readers might remember back during this year’s Louisiana legislative session, we had a post discussing what was really behind the Together Louisiana mob’s attempts to destroy the payday lending industry.

I told Oscar he had to write the story, because payday lending regulations can be pretty dry stuff and it needed a dose of goofery to make for a readable expose’. And here was his punch line…

So we don’t have anybody to do short-term lending anymore, if this passes. Makes for a big hole in the market – and only so much of that can get filled by La Cosa Nostra or the local drug dealer down the street. How do these people think we can fix that?

The Postal Service (USPS) could spare the most economically vulnerable Americans from dealing with predatory financial companies under a proposal endorsed over the weekend by Sen. Elizabeth Warren (D-MA).

“USPS could partner with banks to make a critical difference for millions of Americans who don’t have basic banking services because there are almost no banks or bank branches in their neighborhoods,” Warren wrote in a Huffington Post op-ed on Saturday. The op-ed picked up on a report from the USPS’s Inspector General that proposed using the agency’s extensive physical infrastructure to extend basics like debit cards and small-dollar loans to the same communities that the banking industry has generally ignored. The report found that 68 million Americans don’t have bank accounts and spent $89 billion in 2012 on interest and fees for the kinds of basic financial services that USPS could begin offering. The average un-banked household spent more than $2,400, or about 10 percent of its income, just to access its own money through things like check cashing and payday lending stores. USPS would generate savings for those families and revenue for itself by stepping in to replace those non-bank financial services companies.

Got that? We’re gonna take a business which has enough actual voluntary customers that it turns a profit, and we’re gonna wipe that out so it goes away. And we’re gonna replace that business with a government agency that loses billions of dollars already, basically nationalizin’ the thing and havin’ politicians create a business model for it that insures it won’t turn a profit.

Which means your tax dollars flood in to make up the difference, so people who screw up managin’ their money will get a 1.4 percent interest rate that you can’t even get at the bank.

Because that’s what this crowd wants.

The Together Baton Rouge/Together Louisiana people made a big show of guffawing about conspiracy theories and so forth, and denying there was anything nefarious or grand behind their efforts just to help poor people.

But it’s quite clear that there is an effort afoot to clear the field of private payday loan operators. Together Baton Rouge is attempting to get the Baton Rouge Metro Council to savage the industry in the state’s capitol city, and their allies are working diligently to attack that industry at the federal level.

Interestingly enough, they found Rep. Cedric Richmond to bring their bill in the House – which is something of a coup for Richmond since heretofore his only contribution to Congress has been during the annual baseball game.

He said the proposal, endorsed in January by the Postal Service’s inspector general, would improve the agency’s finances while offering services to under-served Americans.

“In the New Orleans area alone, 181,000 households do not have access to a full range of financial services,” Richmond said. “These are primarily low-income households that are forced to pay exorbitant interest rates to predatory lenders in order to borrow. Allowing the Post Office to offer some basic financial services would save these households thousands of dollars every year, and put the USPS on more stable financial footing.”

Understand something here – the reason the payday lending business charges 20 cents on the dollar for short-term rentals of money is that they run a humongous risk of not getting paid back – because the people who borrow money from payday lenders are almost never qualified to get loans from other financial institutions.

Richmond thinks that’s “predatory.” But he’s not out there trying to make millions by getting into that business and undercutting the payday lenders on interest rates. Surely if they’re taking advantage of their customers and overcharging them there’s a big hole in the market for a discount payday lender, right?

Instead of engaging in that laudable – and surely-destined-to-be-wildly-profitable – entrepreneurial enterprise, Richmond is bringing legislation to bring the government in, via the Post Office, to crowd out the private sector.

Like Oscar said was the intention all along. And he was right.

The Post Office won’t make money on payday loans. It will lose money on them. It won’t redirect its current force of unionized postal employees to service borrowers and other people desiring financial services; it will add new employees. And rather than the $8.9 billion the Postal Inspector says will be generated for the Post Office, it will go deeper in debt. Meanwhile, you’re going to take an industry that supports some 150,000 jobs and target it for extinction.

This is Hard Left socialism at work. The good news is Richmond won’t even get this bill out of committee.