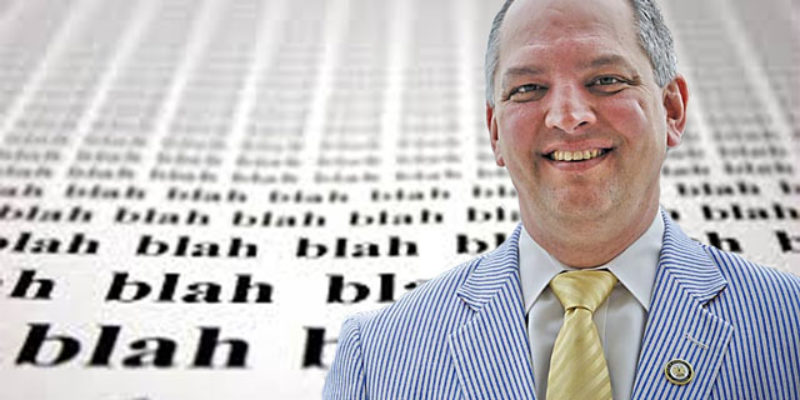 Recent remarks by the leader of Louisiana’s legislative Democrats, state Rep. John Bel Edwards, not only confirms he acts as one of the biggest gasbags in state politics, but also in the process tried to sell a bill of goods no informed and thinking person would buy.

Edwards snared an invitation to speak to the media, no doubt as a tactic to make his campaign for governor anything else but moribund, and proceeded to unload a slurry of drivel. He claimed the current budgeting practices of Gov. Bobby Jindal were designed to forestall a day of reckoning which the next governor would have to address, mainly because of around $1 billion in funds that he alleged would not reappear next year. He said he would address this by jettisoning what he called outdated or ineffective tax breaks and by expanding Medicaid. He railed against “privatization.” He termed himself a candidate of the middle, saying that’s where governance needs to be.

All of which demonstrates that after over six years in office, Edwards doesn’t seem to know much about how Louisiana’s fiscal system works, covers that ignorance with large doses of disingenuousness, and thinks he can fool a lot of people a lot of the time. The “one-time money” claim illustrates all three tendencies. The amount to which he refers is money used that does not come directly from the general fund or directly from dedicated funds to dedicated purposes, yet he made it sound like it dropped from the sky in order to fund continuing operations.

In fact, the truth is few of those dollars came from genuinely bonus events (although it could be argued that roughly the fifth of it those came from the ongoing tax amnesty program was  kind of bonus, even as many of those would eventually have been collected, not just so soon). Most came from predictable, recurring sources that are, in some sense and form, misallocated to low priority, if not entirely imaginary, needs. Unfortunately, over the decades legislators have created a system of dedications and other budgetary devices that shovel money into places where it sits idly for some specified purpose – and may sit there forever because the purpose is of such low priority not all the money for it reasonably can be spent – unless legislators approve transferring some of it for much higher-priority needs.

This system continues because it’s a way for legislators to evade responsibility for making hard choices. They’d rather throw their hands up into the air to signify impotence while simultaneously claiming these are tied by these dedications and they can do nothing in response but funds sweeps or pretend they don’t exist, when in reality they could repeal dozens, if not hundreds, of dedications and then decide how many of these dollars really are needed to fund general state activities and the optimal way by which to collect them – but at the risk of catching heat from special interests and having to make more allocative choices every year (and multiplying dramatically the chances to offend the recipients of government spending, instead of letting these sleeping dogs lie by passing a dedication and washing their hands of it all). Edwards is just as much a coward as they are in failing throughout his career to stump for major fiscal reform along these lines, but is only like some of them (colloquially known as “fiscal hawks”) in trying to exploit the very issue they have caused for political gain without having the guts to seek to apply the correct solution.

Lack of responsibility aside, actual revenues coming into the state on a recurring basis are hardly lower than spending. And what draining of funds does happen often is for a very good reason. Edwards himself provided an excellent example of this with his critique of diminishing the reserves held by the state’s Office of Group Benefits for health care policy payouts, while characteristically drawing the opposite of the real lesson.

He criticized the reduction of this over the past two years by about half from roughly $500 million as a result of privatization of the book of business and claims processing, and predicted state employees and retirees would end up paying more. Of course they will eventually – and much more quickly and severely because of the Patient Protection and Affordable Care Act about which Edwards sings praises – but these rates actually are lower in part because of the savings from the OGB privatization and decision to lower the reserve.

Not surprisingly, Edwards neglected to incorporate two facts into his rant that destroy his thesis. First, even as premium rates will go up 5 percent in a few days with the start of a new plan year, they’ve gone down 9 percent in the two previous years after privatization. It will be at least a year before employees and retirees are paying even as much as they had been three years ago, with this reduction having the effect of halving the reserve (because more in payments went out that were coming in with the reduced premiums). The impending increase will slow this.

But, second, as previously noted, the reserve was too high to begin with given actuarial standards. In other words, in his denunciation of the siphoning of the reserve, Edwards essentially argued that (1) employee, retiree, and taxpayer money (state government roughly matches the premium payment of these others, meaning that they get top-shelf insurance basically at half off) should sit idly, undoubtedly because of his fondness for increasing the size of government, (2) that employees and retirees did not deserve the average $1,000 less each paid over the past two years because of the premium reduction, and (3) taxpayers should have forked over the $114 million saved by OGB privatization and other efficiency measures that barely reduces the gravy train of benefits received in these plans. And he asks to be taken seriously when he claims he can do a better job of budgeting than Jindal?

Especially when considering his presumed ideas about what he sees as the problems in the budget. So what are the reputedly outdated or ineffective breaks to be gotten rid of? Some might be easy to guess, like the motion picture tax credit. But what about one of the least effective, the earned income tax credit, or one as useless as the solar tax credit – subsidizing causes Edwards has in the past supported? Nor could he find enough, unless he goes against his political ideology, to make up for the difference. In reality, there’s not enough, and so he’ll fall back on, but will do everything possible not to admit to, higher taxes and a reluctance to cut government spending or to act to remove the snouts of special interests he supports from the trough.

Perhaps the most odious and ignorant of his remarks came concerning an alleged positive contributor to his budget, Medicaid expansion. Ignorant, because he cannot put aside the inconvenient truth thatMedicaid expansion will not supplement the budget, but will drain it severely and will produce worse health outcomes for recipients. Odious, because of his equating “Christian faith” with big government for a policy that would encourage theft from taxpayers to incentivize harm to the presumed beneficiaries (to avoid such folly, maybe he ought to pay closer attention to Exodus 20:15 and Mark 12:17 and to ensure he puts his faith in God before that in government).

Yet perhaps he intuits that the expansion of Medicaid as dictated by current federal law might not be such a good thing, because he also volunteered that the state could craft a state-specific Medicaid expansion program, perhaps involving the creation a private insurance model that includes co-pays and work requirements for participants, stating “You can fashion this program in a very conservative way that protects Louisiana values.” Except the dunderhead forgot that’s already in the works, and he voted for it.

And which brings us to the biggest howler he issued, that he’s candidate in the “middle,” attempting to reinforce that with a trick straight out of the Southern liberal Democrat manual by asserting pro-life credentials. Endlessly repeating this and/or other socially conservative preferences is a standard ploy among his kind to fool people into ignoring doctrinaire liberal populist preferences on all other issues. The record actually shows that he is a stark, raving liberal populist, as indicated by his lifetime 29 score on the Louisiana Legislature Log voting scorecard (where 0 means all votes were for the liberal/populist issue preference). If Edwards sees himself as a political centrist, he must think that Josef Stalin and Mao Zedong were limousine liberals.

So all the media really got treated to in Edwards’ unleavened sermon was an unserious mixture of ignorant and/or disingenuous piffle, designed to deflect, distract, and delude observers into thinking he’s not peddling tax-and-spend bigger government that empowers politicians like him and special interest fellow travelers instead of people. Not that they seemed stirred enough to call him on it (although they caught him out on his inattentiveness concerning a bill that had the effect to create a pension benefit for two State Police members); hopefully as long as he stays in the contest they’ll find the curiosity to challenge his unsupportable narrative.

Interested in more news from Louisiana? We've got you covered! See More Louisiana News
Previous Article The Advocate Swings And Misses At Geymann On The Common Core Issue
Next Article VIDEO: Does Anybody Else Have Concerns About Kip Holden’s Fitness To Continue In Office?