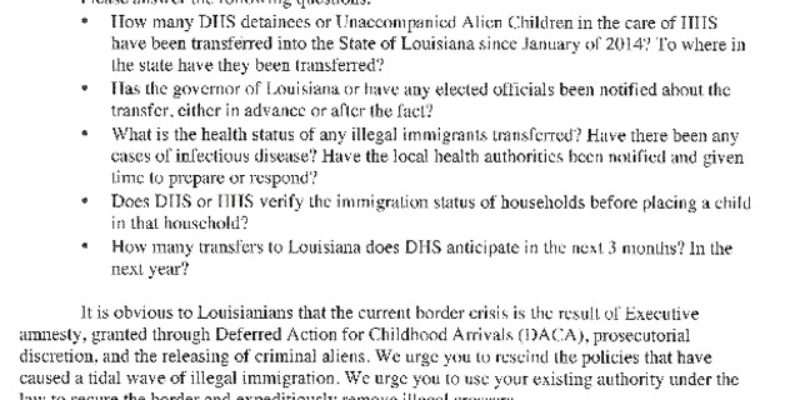 Yesterday we had a post up, which we ultimately took down amid official denials, based on a report we received from a highly-placed source that C-17 planes were landing at Belle Chasse Naval Air Station loaded with illegal aliens from Central America and a plan to house them at the Federal City across the Mississippi from downtown New Orleans.

The media contact from Belle Chasse NAS called us to swear up and down that it wasn’t true. And state rep. Jeff Arnold (D-New Orleans), who chairs the board that runs the Federal City, also denied it. Our source stood by the story. We don’t know what to believe.

What we do know is that the feds are going to try to put Central Americans in Louisiana. It’s too obvious a solution for them with the military installations we have in the state and our proximity to Texas. And there is too much smoke surrounding the possibility.

For example, here is a report from KSLA-TV in Shreveport about potential efforts to house the illegals at Hirsch Coliseum…

Sen. David Vitter has been howling for a week about the Department of Homeland Security’s refusal to disclose plans to bring the Central Americans to Louisiana. Vitter received no response to a letter he sent on July 10 demanding to know how many members of the Children’s Crusade have already been brought here and how many will be brought here or where they’ll be brought. 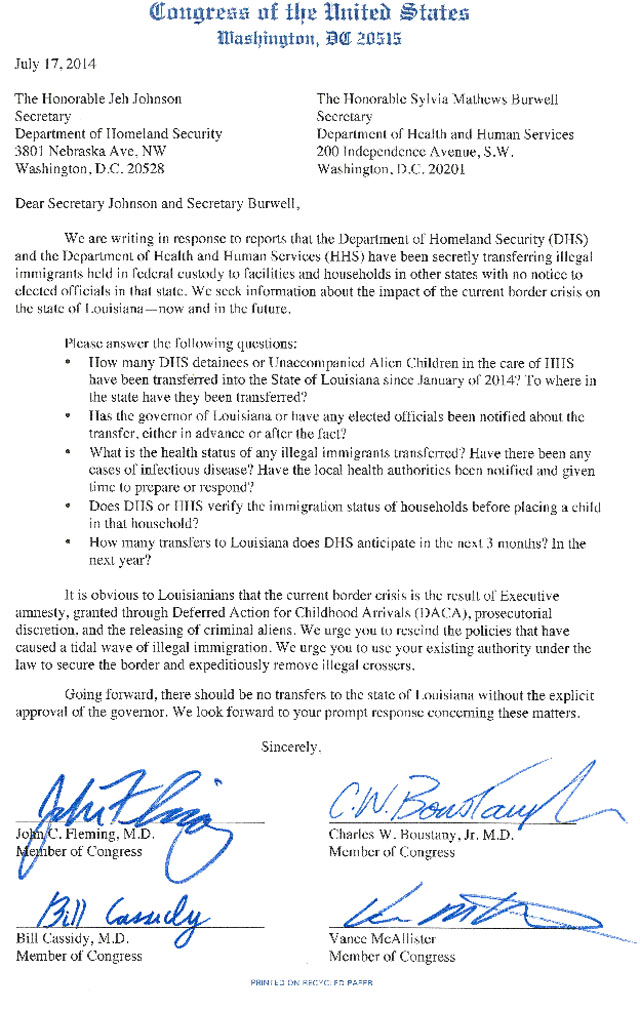 Vitter and Cassidy have introduced companion bills in the Senate and the House that would block the importation of the illegals into the country by the feds. The bill…

• Requires mandatory detention of all unaccompanied minors upon apprehension by border agents.
• Gives unaccompanied minors the option to voluntarily return to their country of origin.
• Places unaccompanied aliens children affiliated with gangs in an “expedited” removal proceeding.
• Raises the standards for “credible fear of persecution” to “substantiated fear of persecution” for unaccompanied minors seeking asylum under the law.
• Places unaccompanied minors without claims for asylum on the next available flight to their home countries within 72 hours of an initial screening, barring cost, feasibility, repatriation agreements with the minors’ countries and the health and safety of the minor.
• Extends the bar to reentry for all illegal aliens to 10 years.
• Requires Secretary of Homeland Security to submit an annual report to Congress detailing voluntary departures, deportations, and grants of refugee or asylum status.

At some point, one of these stories will come true. And when that happens, you’re going to see a repeat of the protests in Murrieta, California when DHS tried to bring illegals there.

How does this affect the politics of Louisiana’s upcoming races? Well, for Cassidy the opportunity to partner with Vitter on the bill helps to shore up his credibility on immigration and border security policy after a rocky interview with WRNO-FM host Denny Schaeffer last week. Cassidy’s Republican opponent in the upcoming Senate race, Rob Maness, has been attempting to gain traction on him since that interview – even going so far as to say that Maness is with Vitter and against Cassidy and the Democrat incumbent Mary Landrieu on the issue. Now that Cassidy and Vitter are working together on legislation tightening the border, Maness just had his legs cut out from under him.

As for Landrieu, the minute it becomes public that DHS is bringing illegals to Louisiana she’s going to suffer badly in the polls. Illegal immigration is an awful issue for her, because the vast majority of the state’s electorate takes a hard line on border security and against amnesty. Furthermore, the prospect of the federal government bringing illegals to Louisiana without even notifying local officials puts Landrieu in a tough position – is she on board with DHS’ actions? And if not, why can’t she do anything about it? Given all the supposed stroke she has in Washington, that is – since it’s the primary selling point she’s offered for her re-election.

Interested in more news from Louisiana? We've got you covered! See More Louisiana News
Previous Article Obamacare ‘Lie’ Touted By Landrieu Is Now A Reality In Louisiana
Next Article NEW ORLEANS: Get An Obamaphone, Get Registered To Vote