Our buddy and frequent Hayride contributor Mike Bayham was driving around in New Orleans a couple days ago and saw the scene you see at the top. He said he took that pic on the corner of Claiborne and Franklin, which is more or less in the hood, in front of a Subway place in a strip mall. 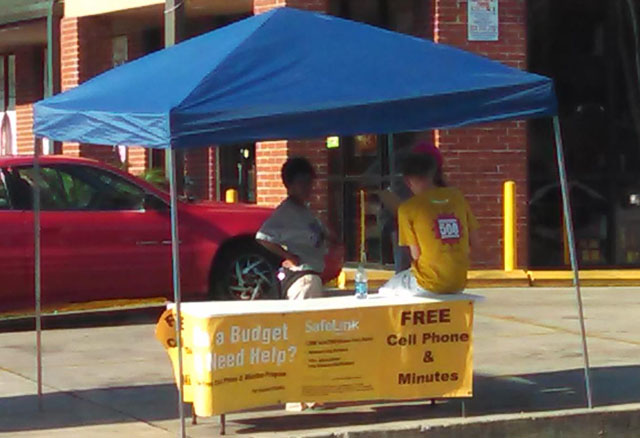 TracFone Wireless is America’s largest “No-Contract” cellular service provider in the U.S. with over 18.8 million subscribers. TracFone Wireless is a subsidiary of América Móvil S.A.B. de C.V. (‘AMX’) (BMV: AMX; NYSE: AMX; Nasdaq: AMOV; LATIBEX: XAMXL), the 5th largest cell phone company in the world and the largest in all of the Americas with more than 236 million wireless subscribers. América Móvil has been named ‘Technology Hot 100’ company by Business Week for the past two years in a row.

TracFone is owned by that Carlos Slim dude, the Mexican bllionaire who bailed out the New York Times a while back. He’s gettin’ big coin from the Obamaphone program. And where his people are out tryin’ to hook up po’ people with Obamaphones, they’re doin’ Obama (and Mary Landrieu) a solid by puttin’ po’ people on the voter rolls.

Interested in more news from Louisiana? We've got you covered! See More Louisiana News
Previous Article Lots Of Buzz About Illegals Coming To Louisiana
Next Article SADOW: Jindal As Ahab