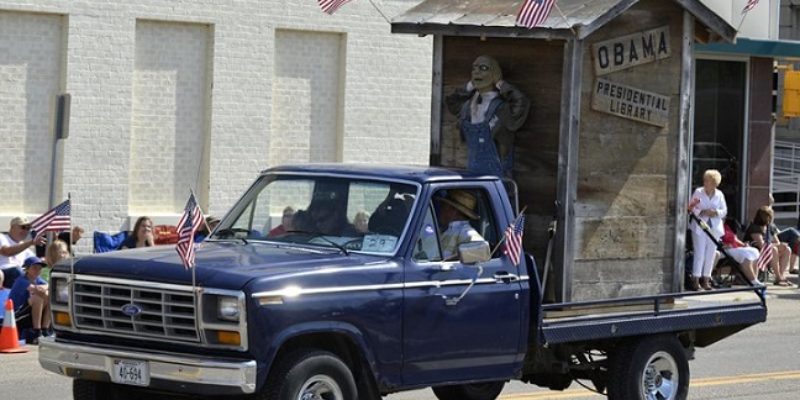 After a float criticized President Barack Obama in a 4th of July parade in Norfolk, Nebraska, the Department of Justice announced that it will investigate the matter.

The float, pictured above, features a “zombie-like figure resembling Mr. Obama standing outside an outhouse, which was labeled the ‘Obama Presidential Library.'”

Much like the DOJ investigation into a rodeo clown last year, in which a rodeo clown mocked the president wearing an Obama mask, the DOJ has sent a Community Relations Service (CRS) team member to investigate the float in-depth in Norfolk.

Not surprising, the local NAACP was at the meeting with the CRS member, along with Norfolk Mayor Sue Fuchtman and the coordinators of the annual parade, the Norfolk Odd Fellows.

The float’s curator said he has legitimate arguments as to his opposition to Obama, which fueled the mocking-like nature of the parade float.

The float’s creator, Dale Remmich, has said the mannequin depicted himself, not President Obama. He said he is upset with the president’s handling of the Veterans Affairs Department, the World-Herald reported.

“Looking at the float, that message absolutely did not come through,” said NAACP chapter president Betty C. Andrews.

Jumping on the racism bandwagon, the Norfolk Democratic Party called the parade float one of the “worst shows of racism and disrespect for the office of the presidency that Nebraska has ever seen.”