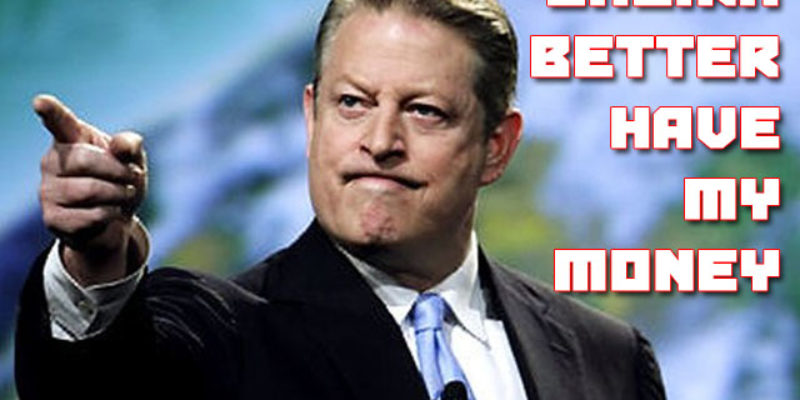 Y’all wanna start the weekend off with somethin’ fun? Of course you do. That’s why we’re gonna give you this – it turns out that the Qataris who own Al-Jazeera are givin’ some of Al Gore’s money to ISIS instead of payin’ him for his crappy cable network he sold ’em.

Naturally, Gore doesn’t care so much that money went to ISIS. What he cares about is that it didn’t go to him.

So he’s suin’ ’em. And check out who his attorney is.

Current TV co-founders Al Gore and Joel Hyatt have launched a fraud and breach-of-contract lawsuit claiming that Al Jazeera is withholding money from its $500 million purchase of the cable news network.

The complaint was filed under seal in the Delaware Court of Chancery.

Former U.S. vice president Al Gore is being represented byDavid Boies, the attorney who memorably represented him in the 2000 battle over a Florida election recount.

“Al Jazeera America wants to give itself a discount on the purchase price that was agreed to nearly two years ago,” says Boies in a statement. “We are asking the Court to order Al Jazeera America to stop wrongfully withholding the escrow funds that belong to Current’s former shareholders.”

But wait – remember this quote after Gore sold his enviro-weenie TV network to a bunch of oil sheikhs?

“I’m proud of the transaction,” Gore responded. “It’s going to really be a positive addition to the U.S. media landscape.”

Yeah, I know. You might as well laugh. It’s too hilarious not to.

Think Gore can sue ISIS to recover his money? Maybe he can go over there and serve ’em himself.