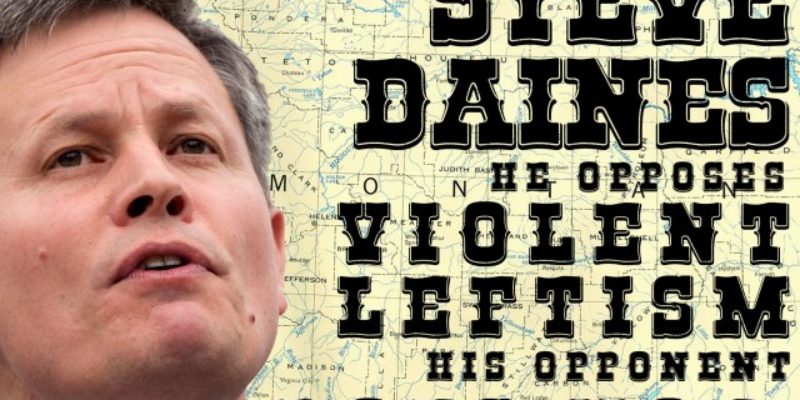 Not after what the Democrats have done in Montana.

You’ve probably seen the implosion of John Walsh, their putative nominee who had to get out of the race after it was revealed he’d plagiarized his Army War College thesis. But three weeks ago Walsh was replaced by Amanda Curtis, a 32-year old state senator they’re touting as a fresh face and an energetic young player on the political scene. Nobody thinks she has a chance against the Republican, Steve Daines, but they’re touting her anyway.

Except it turns out that if you think Todd Akin was an extreme candidate with a permanent foot in his mouth – which we wouldn’t argue with, mind you; Akin is Stupid Party personified – meet this clown.

Several Akinesque idiocies there. But while Akin was a goofball who’d been a Congressional back-bencher of long standing and imploded when he tried to get to the next level, Curtis actually has some political skeletons in her closet.

Like, for example, membership in the Industrial Workers of the World. Remember the Wobblies from high school history class? We thought they were gone. Now they’ve got a U.S. Senate candidate.

The IWW was founded in Chicago in June 1905 at a convention of two hundred socialists, anarchists, and radical trade unionists from all over the United States (mainly the Western Federation of Miners) who were opposed to the policies of the American Federation of Labor (AFL).

The convention, which took place on June 24, 1905, was then referred to as the “Industrial Congress” or the “Industrial Union Convention”—it would later be known as the First Annual Convention of the IWW.[12] It is considered one of the most important events in the history of industrial unionism.[12]

The IWW’s goal was to promote worker solidarity in the revolutionary struggle to overthrow the employing class; its motto was “an injury to one is an injury to all“, which improved upon the 19th century Knights of Labor‘s creed, “an injury to one is the concern of all.” In particular, the IWW was organized because of the belief among many unionists, socialists, anarchists and radicals that the AFL not only had failed to effectively organize the U.S. working class, as only about 5% of all workers belonged to unions in 1905, but also was organizing according to narrow craft principles which divided groups of workers. The Wobblies believed that all workers should organize as a class, a philosophy which is still reflected in the Preamble to the current IWW Constitution.

Yep. Curtis is a member of this gaggle of commies…

If you’ll look, you’ll see the inscription on the gravestone says “Slain by capitalist interests.” Frank Little was a Wobbly organizer who had made a practice of trashing American World War I soldiers as “Uncle Sam’s scabs in uniform,” and he ran into some trouble when attempting to incite a strike by copper miners in Butte, Montana – specifically, that trouble involved a rope, gravity and a railroad trestle.

That picture is from three weeks ago. Curtis had the grave rededicated with the new inscription.

“Sterner means” is identified later in Sylvis’ quote: “A little blood-letting is necessary in desperate cases.” Sylvis died in 1869 at 41 years old, while he was in the process of trying to create a single labor union that would represent the proletariat nationwide like the Wobblies later attempted.

Curtis is also a big fan of Elizabeth Gurley Flynn…

Elizabeth Gurley Flynn (August 7, 1890 – September 5, 1964) was a labor leader, activist, and feminist who played a leading role in the Industrial Workers of the World (IWW). Flynn was a founding member of the American Civil Liberties Union and a visible proponent of women’s rights, birth control, and women’s suffrage. She joined the Communist Party USA in 1936 and late in life, in 1961, became its chairwoman. She died during a visit to the Soviet Union, where she was accorded a state funeral.

There’s more where that came from, but it’s mostly all the same kind of thing.

What the Montana Democrats have done is to nominate an actual communist who’s at the very least sympathetic to the idea of violent revolution and the physical destruction of the free enterprise system. You can decide for yourself if that makes her more unfit for office than a guy with some stupid, but ultimately inconsequential, ideas about the female reproductive system.