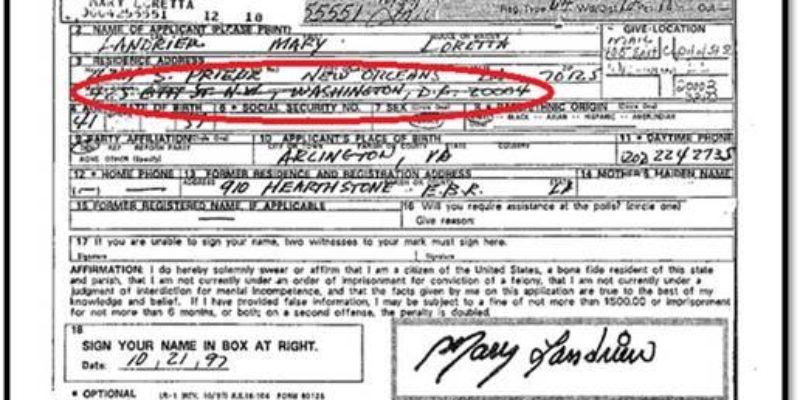 In order to qualify for the Louisiana Senate race against Rep. Bill Cassidy (R-LA) this November, Landrieu is claiming that she lives with her parents Moon and Verna Landrieu at their large-scale New Orleans bungalow on South Prieur Street. Landrieu has a $2.5 million home in Washington DC with her husband Frank Snellings that the two built together.

But, on her voter registration card, Landrieu lists Washington DC as her primary residence. Take a look at it here: 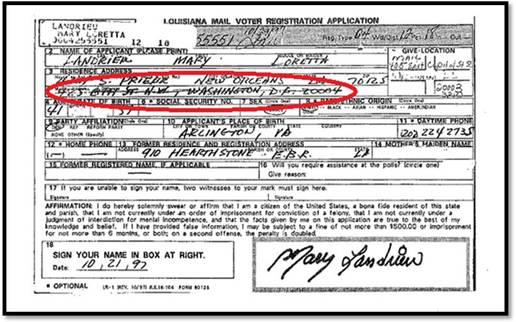 Landrieu asserts that she still lives with her parents though, saying “I have lived at my home on Prieur Street most of my life and I live there now, when not fulfilling my duties in Washington or serving constituents across the state.”

In a report by the Washington Post, the Moon and Verna’s neighbors say they haven’t seen Mary in years.

“I don’t think she lives there,” said Fontaine Wells, 65, pointing at the Landrieu home. “She might come visit, but come on now — she lives in D.C. I don’t think I’ve ever seen her.”

Michael Fitzgerald, 61, has lived around the corner from the Landrieus for three decades. He said he sees Moon and Verna Landrieu regularly, as well as Mitch Landrieu, Mary’s younger brother and the city’s current mayor, who lives in a home he owns nearby.

“They’ve been very good neighbors,” Fitzgerald said. “On Election Day, [Mary] is seen at our polling place accompanying her parents.” He added, “I have not seen her lately. . . . She’s been in the Senate for — I’ve lost count — 16 years? 18 years?”

In the years since, the neighborhood has been rebuilt and is now a post-Katrina success story. Moon Landrieu was particularly active in the rebuilding efforts, said Kelli Wright, who has lived in Broadmoor since 1988 and is president of the Broadmoor Improvement Association.

“Is Mary’s address the Landrieu’s family home?” Wright asked. “I don’t know where she lives. I’ve never seen her around the neighborhood. It doesn’t mean she’s not here, but I haven’t seen her. We see Moon, we see Verna, we see the mayor.”

In fact, it would actually be easier for Landrieu to run for office in Washington DC than it would be to run in Louisiana.