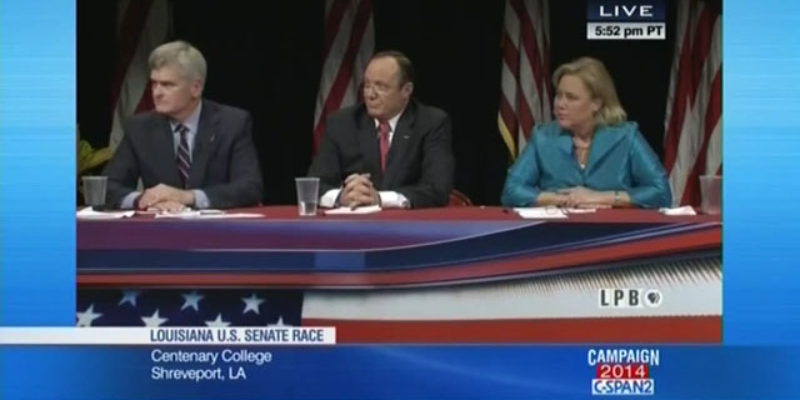 This isn’t going to be a very detailed report on the first debate of any consequence in the Senate race, because there isn’t all that much to report.

It was about what you could expect from a debate you’d watch on LPB. So given that, a few random observations…

– Mary Landrieu’s campaign couldn’t have picked a better panel. Shauna Sanford from LPB, Alan English, the editor of the Shreveport Times, Jeremy Alford from LAPolitics who was the best of the lot, and Stephanie Grace from the New Orleans Advocate. It was more or less like a firing squad for Cassidy, and better than two-thirds of the questions were about free stuff from the government.

– The big news from the debate is going to end up being that, asked to rate Bobby Jindal and Barack Obama on a scale of 1 to 10, Landrieu gave Obama a “six or seven.” The Republican National Committee is already all over Twitter hammering her for that and if it’s not a :30 campaign spot by Thursday morning we’d be shocked. Bill Cassidy and Rob Maness both scored him a zero, with Cassidy calling him one of the worst presidents ever. As for Jindal, he got a seven from Cassidy, a five from Maness and a three from Landrieu.

– Cassidy made a little bit of news when he said he was for medical marijuana, which might get some sheriffs screaming at him – but since the sheriffs endorsed Landrieu there is no reason why Cassidy should care. The younger voters and the libertarian crowd might like that position, too, so he might have picked up some vote there. As we’ve discussed before there is some indication that legalized marijuana of some kind may be popular in Louisiana, so he might have picked a winner there. Or not.

– Cassidy’s worst moment was, when asked about military issues, he brought up the fact he’s had John McCain campaigning with him. That’s cringeworthy; Cassidy’s better off trying to have voters identify him with Marco Rubio, Ted Cruz, Mike Lee and Rand Paul as a potential senatorial type; or at least a Jeff Sessions or Pat Toomey or Ron Johnson. You don’t want people associating you with McCain or Lindsey Graham. It was bad enough that McCain was in Louisiana Sunday and Monday; advertising that fact was frightening if you’re for Cassidy.

– Landrieu tried to hit Cassidy on Social Security by howling that he voted for raising the retirement age. He did a pretty good job of countering that and explaining what the plan was. Maness said he was against raising the retirement age because blue collar people can’t work until they’re 70, which has very little to do with the proposals voted on in Congress in which nobody will be asked to wait until 70 to draw Social Security for a generation or more. The answer didn’t make Maness sound like a particular conservative.

– Maness won the question about ISIS by laying out the military analysis of going in and beating them – and specifically talking about exit strategies and definitions of victory. Cassidy talked about how rotten the decision was for Obama to have gotten out of Iraq against the advice of his generals. Landrieu didn’t say much of anything.

– The three were asked a yes-or-no question about whether health care is a fundamental right, which is a classic left-wing formulation. Maness got the question right by saying no, but that would be a killer were he to have had a shot at winning the race. It’s impolitic to say no to that question, and Cassidy said yes. You could call Cassidy a RINO for that answer, and we won’t argue that, but if you’re going to say health care is not a fundamental right you have to explain why – which you can do, and make the convincing case for it, but it takes a while (the answer is that a fundamental right is something you can have without having to ask somebody else to provide it to you – like free speech or the right to bear arms or the right not to be subjected to warrantless searches, for example). So he punted and said yes, and Maness’ press releases are going to call him a socialist.

– Landrieu did nothing but tout all the free stuff she’s brought to Louisiana. She offered very little for independent voters or the smattering of Republicans she’s pulled in in the past, or even centrist Democrats, to latch on to as a reason to support her. Her whole message was how Cassidy was going to end Medicare, raise the age of Social Security, couldn’t deliver anything for oil and gas, watch Barksdale Air Force Base shut down, blah blah blah. The Medicare attack fell flat when Cassidy mentioned that what he voted for to “end Medicare” was actually a bill John Breaux had originally come up with that Paul Ryan and Ron Wyden had put together, and he mentioned that her Obamacare vote had the effect of cutting $700 billion out of the Medicare trust fund. She didn’t win on that one. Especially given that what Landrieu said about Medicare and Cassidy’s vote to “end” it was called Politifact’s “Lie Of The Year” in 2011, which you’ll undoubtedly hear a lot about for the rest of this week.

– There was a campaign finance question asked by Alford, which Landrieu used as an excuse to bring “The Koch Brothers” into the mix. Cassidy responded to that by mentioning that Harry Reid has been savaging him through some PAC people don’t know is Reid – he said it was the Patriot Majority PAC, when in fact it’s the Senate Majority PAC he’s talking about (the Patriot Majority PAC is a Soros-union funded outfit which has trashed Cassidy as well) and won the question when he said the change he’d like to see made is that if Harry Reid wants to attack him he ought to be honest about identifying himself as the attacker. Maness’ answer was relatively nondescript, but the next question was about economics and he spent most of his answer basically griping about how Cassidy and Landrieu have more money than he does. A clue: you’re a politician. Nobody cares about your problems.

– Asked about a balanced budget amendment, Landrieu differed from Cassidy and Maness by saying she’s for a balanced budget but not an amendment. That represents a broken promise, because she was for one in 1996 when she first ran for the Senate.

All in all, there are more edifying ways to spend an hour. Cassidy was a little stiff, Landrieu was shrill and did a poor job portraying herself as a centrist and Maness came off as somebody who’s not from Louisiana. Each of the three camps will probably claim victory, but Landrieu’s is probably the least valid claim since she needed a clear win and didn’t get it. Maness wins just because he was on the stage with the other two as an equal, if just for one night. For Cassidy, he wins because he didn’t lose. He held his own with enough wins on individual questions and no particular gaffes outside of the McCain thing, and given that he’s ahead in the polls that’s good enough for now.