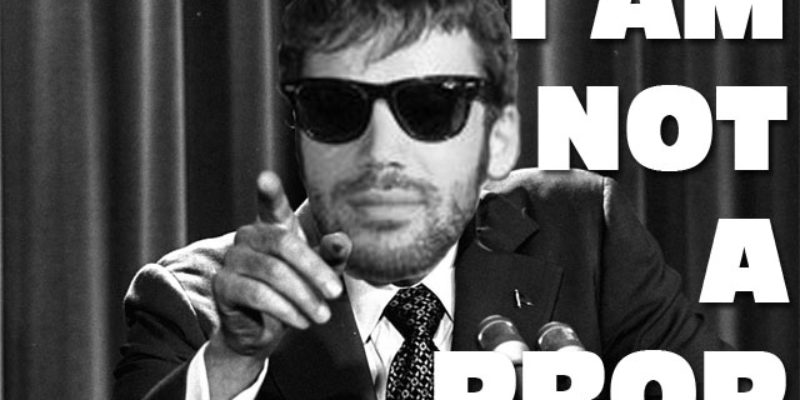 To fill our readers in on something that might be a bit more inside-baseball than most people would care to be informed about, yesterday we had a post on the mind-explodingly pitiful press conference in Texas, in which hapless and nauseating Democrat gubernatorial candidate Wendy Davis gathered a set of token disabled people to show support for her attack ad against Greg Abbott – a campaign spot so horribly bad that even MSNBC wrote her off.

You may have seen our piece on the ad and the press conference. If not, see it here. And here’s video of the proceedings, which lent a comic quality to the affair – in which one of the tokens has his chair dragged away from the microphone after giving his pro-Davis spiel…

What we didn’t mention was that the draggee was our old pal Lamar White, who runs a left-wing blog replete with unfounded accusations, socialist fabulism and unhinged bile. He calls himself CenLamar, owing to the fact that he supposedly operates out of Alexandria. But he doesn’t live in Alexandria at present; he’s a law student at SMU in Dallas.

White has cerebral palsy, which is why he was asked to speak at Wendy Davis’ press conference. He doesn’t hold any particular interest for the voters of Texas other than due to his disability. He’s not an elected official, he doesn’t run a citizens’ group, he’s not a party official. He was there to show that Wendy Davis has support from disabled people so it’s OK for her to cut offensive ads that attack Greg Abbott for his disability.

Which is what’s known as a prop. And the Abbott campaign, via campaign manager Dave Carney, characterized White as such in a tweet.

Andrew Stiles of the Washington Free Beacon called the presser, and particularly the dragging of White’s chair, “awkward.”

Particularly given this bit of information. Because White told the Houston Chronicle’s Lauren McGaughy, formerly of the New Orleans Times-Picayune and a personal friend of White’s, that it was all his idea…

“I’m clumsy, and I fall sometimes. I didn’t want to fall on camera, so I personally asked them to slide me over in the chair,” said Lamar White, Jr., who has cerebral palsy. “I asked them to move me. Because I was worried that if I stood up, I’d fall down on camera.”

.@GregAbbott_TX, I'm not a prop. You owe an apology and must denounce this slur and your campaign's retweets.

.@AndrewStilesUSA I am the disabled person you ridiculed on your website. I asked them to help me slide over b/c I'm not good on my feet.

And not to be outdone, when asked by another left-wing Louisiana blogger about our story and the fact we didn’t identify him by name in the video, this…

.@wesawthat Scott McKay of @TheHayride once again proves himself to be the biggest bigot in the Louisiana media.

Take it at face value if you want that Lamar choreographed yesterday’s awkwardness. But if you do, let’s consider how completely amateur the whole thing is.

First, if Lamar couldn’t see that he wasn’t doing his candidate a whole lot of good by having a handler drag his chair away from a microphone it doesn’t particularly speak for his political, or theatrical, acumen. There were lots of ways to handle his exit from center stage. He could have walked off with someone offering him a shoulder to lean on and prevent a fall, he could have used a wheelchair, he could have had a podium of his own set up slightly to the center so that it wouldn’t have been necessary to move him at all in the middle of the press event, he could have had a Segway, or he could have even been on a chair with rollers. Any of those options would have looked less “awkward,” which is another way to say demeaning, than what actually happened.

So if this was his idea of stagecraft, let’s just say he’s not good at it. If you’re going to be a prop to show that Wendy Davis isn’t bigoted against handicapped people despite the ad she just made, you really don’t want to put yourself in position to make it look like her campaign can’t handle its disabled prop-people with any degree of dignity.

So this is a criticism of White that isn’t bigoted about his disability; it’s a criticism of the fact he made his candidate look like a fool – and a fool insensitive to disabled people at that, which defeated the entire purpose of his showing up to defend her. The fact that he’s now lashing out at anyone who commented on the spectacle is evidence that he may understand this.

But it’s not like Davis is a victim here, because regardless of White’s contention this was all his idea the Davis campaign is supposed to be a professional operation. Obviously that’s not the case, but it isn’t too much to expect that a major-party nominee in one of the largest states in the union would have campaign staffers capable of staging a press conference so as not to create an embarrassing incident. Where were those staffers when White asked that someone drag his chair across the room to the bemusement of the audience both live and on TV? The point of a campaign staff is that when a stupid idea like that is presented, it’s immediately shot down in favor of a far better option.

But if Davis had any better options in mind, they wouldn’t be headed for an ugly loss next month. And in that respect, at least White can console himself, amid playing Twitter warrior against his perceived bigoted tormentors, that he couldn’t have really done Davis any harm.