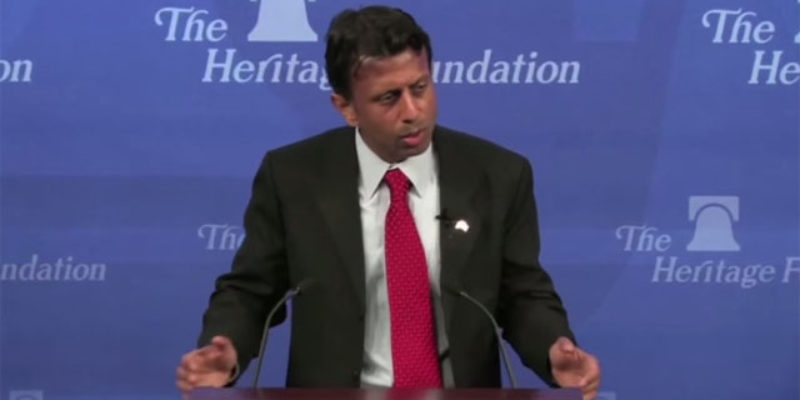 From a press release put out by Louisiana Gov. Bobby Jindal today comes a blast of clear thinking with which the majority of the American public seems to wholeheartedly agree…

Today, Governor Bobby Jindal called on the federal government to temporarily add certain groups of people – except first-responders, health care professionals, and relief workers – to the no-fly list and stop them from traveling to and from countries with Ebola.

Governor Jindal said, “I continue to believe that the best way to stop the spread of Ebola in the United States is for the Obama Administration to shut down flights coming into our country from Ebola-stricken countries. Even though it makes common sense to do this, the White House has refused to do it.

“At the very least, we need to place more travel restrictions on who can travel to and from Ebola-stricken countries. That’s why I am calling on the federal government to block people – except first-responders, health care professionals, and relief workers – from traveling to and from countries with Ebola.

“The no-fly list should be temporarily expanded to include non-U.S. citizens in the United States or in West African countries who are not first-responders, health care professionals, or relief workers, and American citizens who want to travel to Ebola-stricken countries for pleasure.

“Healthcare professionals currently in the United States who have been in contact with an Ebola patient should be added to the domestic and international no-fly list and not be allowed to get on an airplane.

“With the exception of healthcare workers who came into contact with an Ebola patient, the no-fly list would not stop people from flying to other countries not afflicted by Ebola.”

UPDATE: Also, Jindal had this…

Governor Bobby Jindal blasted President Obama today and said the federal government’s response to the spread of the Ebola virus is incompetent and the administration has committed malpractice. Two weeks ago, Governor Jindal called on the Obama Administration to stop flights coming into the United States from Ebola-stricken countries.
Governor Jindal said, “President Obama came into office promising competent government, but his tenure has been anything but competent. The latest nightmare for Americans caused by the incompetence of the Obama Administration is its detached response to the Ebola crisis. The Obama Administration is committing malpractice.
“This lack of preparedness is a pattern for President Obama. The President underestimated Ebola. He said it was “unlikely” it would reach the United States. The President underestimated the Gulf oil spill. He relied on his ‘experts’ and let the oil advance.
“There’s an old saying that battle plans don’t survive contact with the enemy. I learned during the oil spill that this White House refuses to throw out their plans when circumstances change. Instead, the Obama Administration seems to be more focused on getting through the 24-hour news cycle than actually solving problems. That is the opposite of leadership and competence.
“Each new day comes with another press conference and another admission from the White House about what they should have done differently. And unfortunately, each new day comes with the risk of more people being infected with Ebola.
“First the Obama Administration said it was unlikely that Ebola would reach the United States. Then it did. Then the Obama Administration said it was unlikely that it would spread. Then it did. The American people want to trust the so-called experts in Washington, but the reality always turns out to be a complete 180 from the White House’s talking points.”