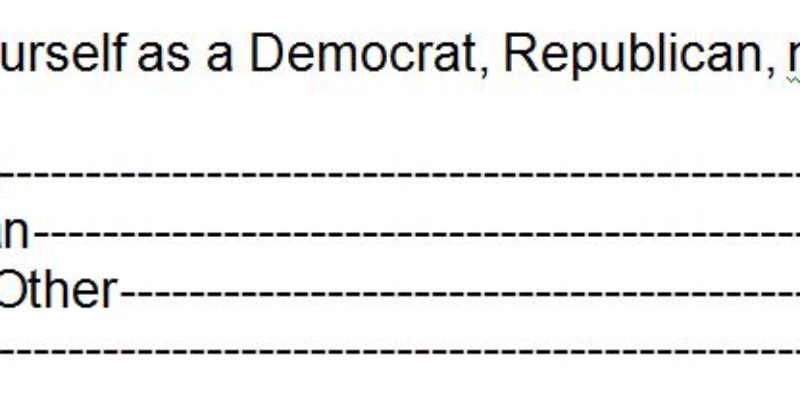 We discussed earlier today a number of notable results of the USA Today/Suffolk poll of 500 likely Louisiana voters released this morning, but in a rush to post the main information regarding the U.S. Senate race we left a few items on the cutting-room floor that our readers might find noteworthy.

First, it’s always interesting to see what polling samples of Louisiana respondents have to say about party ID. That’s driven very often by the questions and how they’re asked, because simply asking whether respondents are Republicans or Democrats doesn’t adequately answer the question in a state where there are no party primaries and your party registration is largely meaningless.

Suffolk handled that by asking the question in two different ways…

The registered voter numbers in Louisiana, as of Oct. 24 of this year – the numbers were updated on Friday by the Secretary of State’s office, show that 46.8 percent of the state’s voters are Democrats, a number which continues to dwindle, 27.7 percent are Republicans and 25.5 percent are independents. So a 43-34-23 split in this poll would seem to be a Republican-friendly sample – but this is a likely-voter poll, and in a midterm election it’s entirely plausible that it might reflect the electorate.

The racial breakdown of the sample is interesting, in that it’s about what one would expect of a midterm electorate in Louisiana…

Mary Landrieu is going to need the electorate to be at least 30 percent black in November to have any shot at getting to 50 in the primary. By voter registration blacks make up 31.4 percent of the electorate, but it’s rare when the turnout figures reflect that share. A 27-28 percent black electorate is a lower number than Landrieu needs, and the Democrats are doing everything they can to generate black turnout to get a higher figure, but Republicans have a get-out-the-vote program as well, and it’s going to be aimed at ginning up turnout among white voters. We’ll know something about whose program is more effective next Tuesday night.

The approval-disapproval figures are interesting as well. Among them…

Maness: 22.6-14.2. Some 34.4 percent had never heard of him, which is a testament to the absolute necessity of raising enough money to get up on TV in a statewide race.

Bobby Jindal: 43.2-47.2. The Governor’s approval numbers aren’t as bad in this poll as they’ve been advertised elsewhere. He doesn’t appear to be The World’s Most Unpopular Governor, as he’s fairly often portrayed. We might see why in just a little while.

What was reported in USA Today and the Lafayette Advertiser about the poll was that among Maness voters Landrieu has an 89 percent unfavorable rating, and the number is 60 percent among those who say they’re voting for minor candidates or are undecided. But here were the results when the head-to-head question was asked of those people…

The 40 percent undecided figure makes this result less newsworthy; one surmises it signifies a lot of those people won’t vote. A 3-1 advantage for Cassidy among the free agents is pretty devastating, though. If the poll has 29 percent unaffiliated between Cassidy and Landrieu in the primary, and he’s getting 75 percent of those, he’s winning the election in December something like 56-44.

Another question was who has run the more negative campaign. Some 34.8 percent said Cassidy, 33.4 said Landrieu and the rest were undecided. That suggests so far that both candidates can whale away at each other without turning off a lot of persuadable voters.

The poll also delved into the 2015 gubernatorial election…

The undecideds are too many to make any colossal judgements just yet, but the results suggest  a Vitter-Landrieu runoff and a structural 44.4-26.4 advantage for Vitter in that head-to-head. That would be pretty tough for Mitch to overcome.

Those results are interesting, because the state’s business community supports Common Core and could well make it a condition for candidates for the legislature to get endorsements and PAC dollars. In conservative House and Senate districts, especially the handful which are open seats, you might well see a business-endorsed Republican pitted against a Tea Party-endorsed Republican with Common Core as the only issue of any consequence separating the two.

Also, fracking beats non-fracking by a 47.8-27 count, so at least statewide there isn’t a lot of support for the anti-fracking NIMBY crowd in St. Tammany.

The respondents don’t think the federal government can do much good where Ebola is concerned. By 58.8-36.4 they give a vote of no confidence.

Medicaid expansion does a little better, as it gets an up vote, but only by a 41-38.6 margin. That’s not good news for the Democrats who have tried to make it a signal issue going forward.

Interested in more news from Louisiana? We've got you covered! See More Louisiana News
Previous Article WAGUESPACK: A Strong Ground Game Can Make All The Difference
Next Article SADOW: 14 Constitutional Amendments Is Far Too Many