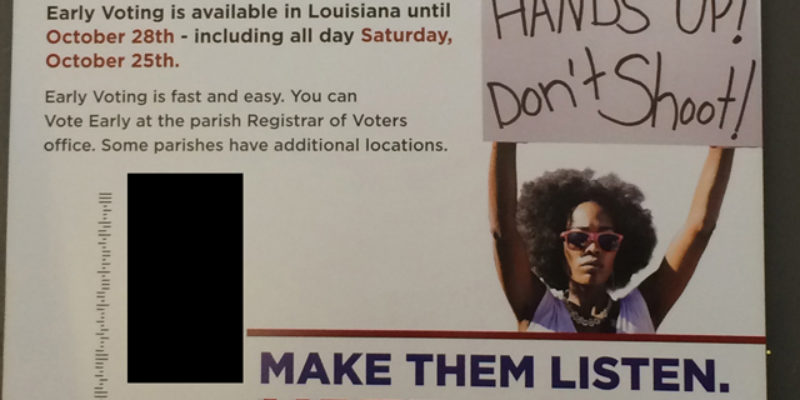 That isn’t some fantasyland math on the Left, either.

So the D’s clobbered the R’s with early voting, particularly in the black community. Compare the 2014 early voting to the 2012 and 2010 early voting and you’ll get an interesting picture…

If you look at the raw turnout figures for early voting, you’ll see that this is a turnout model considerably less than that of a presidential cycle – which is what Mary Landrieu needs to win. But that having been said, the demographic makeup of the early voters looks very similar to a presidential cycle.

It would be fair to say that the Democrats did considerably better with their get-out-the-vote operation for early voting than the Republicans did. The Election Day ground game for the Republican campaigns around the state had better be stronger than it was for early voting; the Dems have banked more votes. But it would also be fair to say this isn’t new, and also that banking more votes doesn’t guarantee collecting more votes. For instance, in 2008 when Mary Landrieu got 52 percent of the vote and was re-elected amid a massive voter turnout, black voters made up 35.5 percent of the early voting electorate. But in the final tally, the black share of the electorate was just 29.5 percent – and while Democrats made up 57.7 percent of the early voters that year, they were 53.8 percent of the final number (it must be recognized that Democrats were 52.5 percent of the state’s registered voters in November 2008; they’re less than 47 percent now).

In 2012, black voters made up 33.1 percent of the early electorate and Democrats made up 50.9 percent; the final numbers were 30.6 percent and 49.5 percent. What that shows is early voting has always favored the Democrats by a few points.

So how are they doing it? How did the Democrats manage to crank up black turnout for the early voting period this year?

Well, one way is about as ugly as you can get. An organization called the Voter Rights Project, which is a fake according to the FEC, has put out this mailer into the black community in Louisiana… 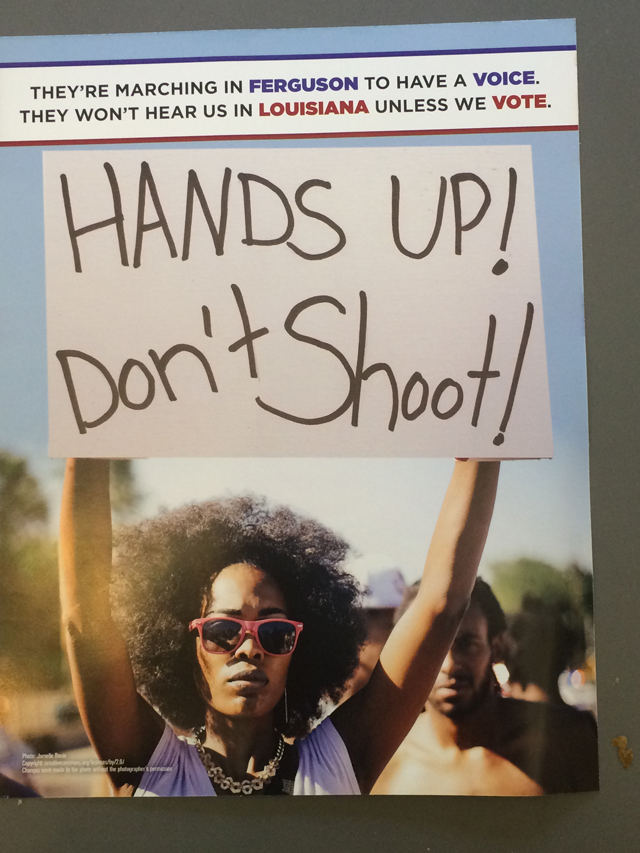 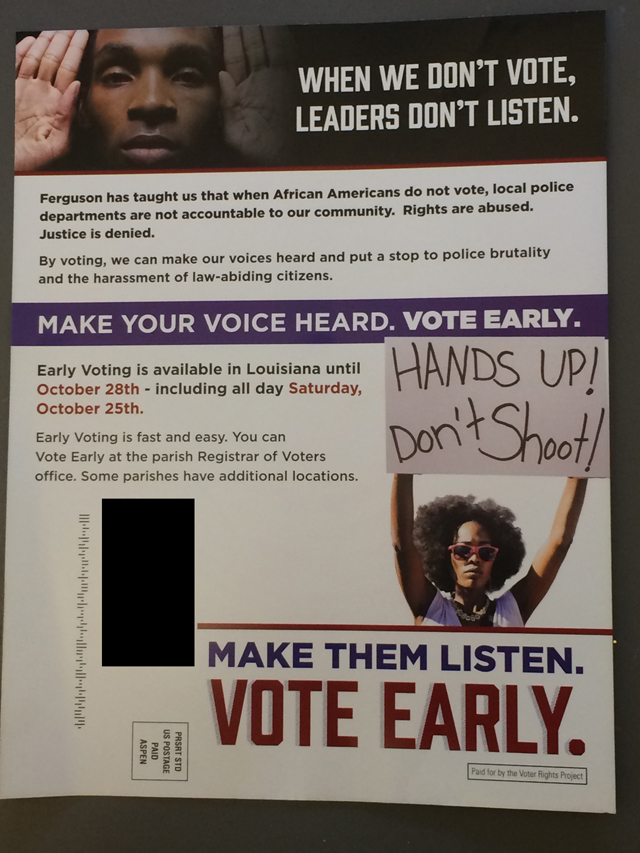 It’s the direct-mail version of that horrible web ad about how black mothers have to put bulletproof vests on their kids to keep the cops from shooting them dead. Given what’s come out about Ferguson and what’s likely to happen in the Darren Wilson case, you wouldn’t think that’s such a red-hot issue to try to gin up voters. And given the way the Merritt Landry case was supposed to be a Trayvon Martin thing but utterly fizzled when the race-hustlers tried to make it that way in New Orleans, one might think they’d leave Ferguson alone.

But this looks like an out-of-state organization – the bulk mail postage was apparently paid in Aspen, Colorado (where there sure are a lot of black people, no?) – which doesn’t particularly care about local sensibilities sending this piece out. It had a return address which would seem to correspond to a UPS Store at 7516 Bluebonnet Boulevard in Baton Rouge, which isn’t any help in trying to figure out who the sender is.

Is this why the early voting numbers were so impressive in the black community this year? One would hope not. But it’s an indication of just how far the Left will go in trying to keep Landrieu in office.