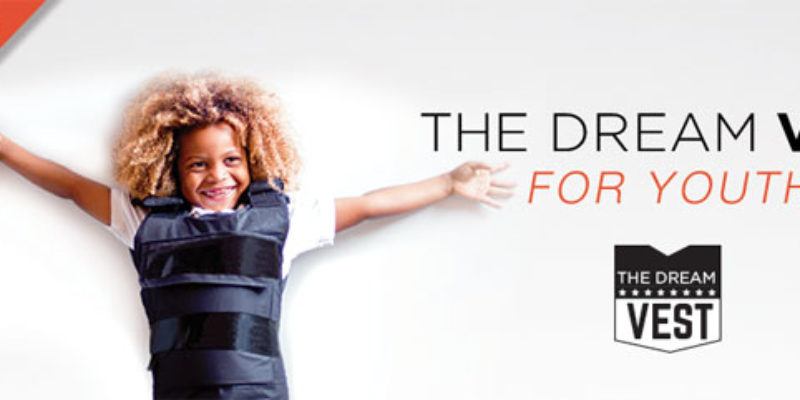 Gotta be. No doubt about it. And when you find out more about the mouth-breathers who put it together, you’ll know the ad isn’t even the worst thing they have going.

How many ways can we come up with how stupid this is?

Well, for one thing it’s illegal to go around in a bulletproof vest in a lot of places. Here in Louisiana, it’s illegal for school kids to wear ’em at school – so the kid in the ad would become a criminal thanks to Helicopter Mom.

Oh, and Imma give away the big reveal here – because the bulletproof vest business isn’t just some gimmick they use in the ad. Oh, no – it’s a lot more than that.

If you go to the Dream Defenders website you’re gonna find out that they actually are sellin’ bulletproof vests for kids to raise money. Seriously. I kid you not. They want $150 a pop for ’em.

Here. You don’t gotta go there. I’ll show ya.

That’s seriously what these idiots are doin’. Just in time for Halloween.

It’s like C-Murder gets into political advocacy or something.

What else? Well, how about the fact that every single place where Helicopter Mom might actually have a case for Junior to need a bulletproof vest to survive a day at public school is run by the Democrats these clowns want black folks like Helicopter Mom to vote for?

Show me a city with a big fat violent crime rate and a Republican mayor, and I’ll show you my pet unicorn. His name’s Cyrus. So the solution at the votin’ booth for the people who gotta live like this…is to change not a damn thing in their community.

And then there’s the part about how every 28 hours a black kid gets shot by cops or security guards or Charles Bronson. How he got in that mix I dunno, but one black kid gettin’ shot by – let’s face it, these folks are talkin’ about white guys – every 28 hours comes to 313 or so a year.

Big number. How many get shot by other black kids?

The FBI says it’s like eight or nine thousand. Which is more or less a bigger number. That doesn’t make it into the ad, which means they’re sayin’ if you’re black your kid needs a bulletproof vest so as to make sure he or she doesn’t get shot by a mall cop but not the gang-bangers in that jacked-up El Camino down the street.

Seriously, that’s their message. Here, this is on their web site…

No one wants to live in a world where bulletproof vests are the norm. Vote on November 4th (and earlier, in Florida and most states), and let’s together take a stand on laws, like Stand Your Ground, that create fear and insecurity in our communities. Show your support by sharing the video using the hashtag #VestOrVote.

People don’t get killed all that much gettin’ hit by lightning anymore, but in 1943 there were 432 of ’em. Which is more than the 313 Trayvons your kid, if you’re black, is gonna become one of if you don’t vote Democrat.

This is what passes for a big splash by the Dream Defenders, which is an outfit outta Florida that got ginned up by, wait for it, SEIU after the Trayvon business.

Oh – and here’s their manifesto…

The Dream Defenders develop the next generation of radical leaders to realize and exercise our independent collective power; building alternative systems and organizing to disrupt the structures that oppress our communities.

They say they want a revolution. I wonder if they’re gonna recruit this guy to run the country once it happens.

Look, if you can find a dumber ad this cycle – and yeah, that “Republicans cut the CDC budget and you’re all gonna die of Ebola” ad is close – you’re welcome to tell us about it. But if there’s a dumber ad than this and it doesn’t make your eyes bleed, I’d be impressed.

Interested in more national news? We've got you covered! See More National News
Previous Article THE REVOLTING TRUTH: What Gender Are You?
Next Article BAYHAM: An Interview With Mike Detillier, Part 1