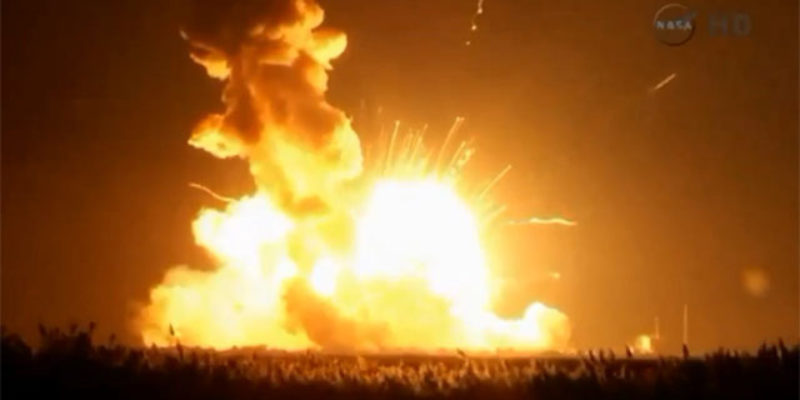 The last 23 seconds of this contains the “kinetic” part of it, when things go wrong on the Virginia coast.

It seems that the Antares rocket, which was slated to deliver supplies to the International Space Station, must have failed to achieve the proper launch velocity and got caught up in its exhaust – thus the explosion.

What does this do to NASA? We’re now in an era of space travel in which private companies seem perfectly capable of successfully accomplishing missions like the one the Antares program was supposed to be doing this morning. We’re also in an era of space travel when our astronauts have to hitch a ride with the Russians in order to get to space, and when the head of NASA goes on TV to say that his job is to make Muslims appreciate how awesome they are at science, when Muslim countries are the least scientifically advanced on earth.

And after six years of that kind of leadership, when NASA has gone from one of the shining examples of innovation, excellence and competence within the American public sector to another faded, has-been agency incapable of a milk run to the International Space Station without crashing and burning.

The world would be laughing at this evening’s failure but for the Russians’ own spectacular crash-and-burn a few months ago.

As of now, it might be time to begin contracting out the space program and turning it into an industry rather than a government activity. If not to privatize space altogether.