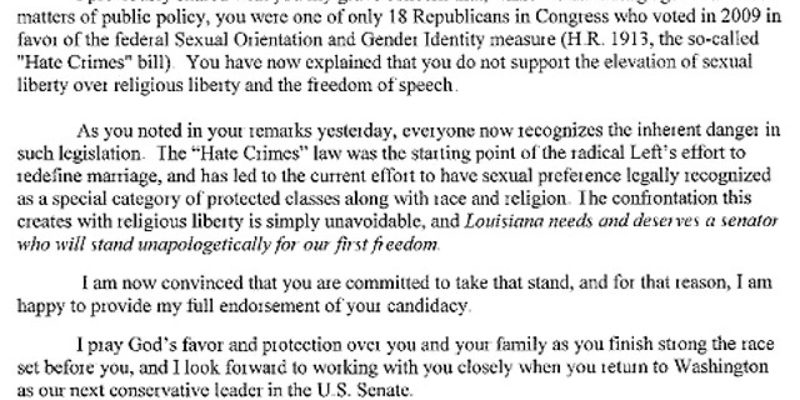 It took a good amount of work to pull the two camps together, particularly given Perkins’ statements about the likelihood of his support for the Republican candidate in Louisiana’s Senate runoff, but this afternoon there was a breakthrough and a major step in unifying the disparate elements of the Republican Party.

Perkins, the head of the Family Resource Center, issued a letter endorsing Cassidy for the Senate against the Democrat incumbent Mary Landrieu… 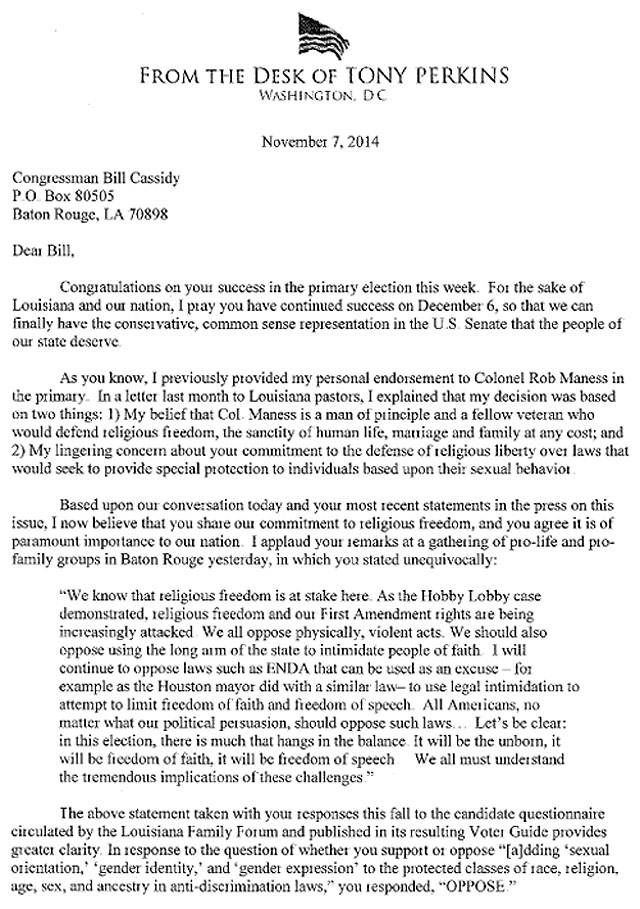 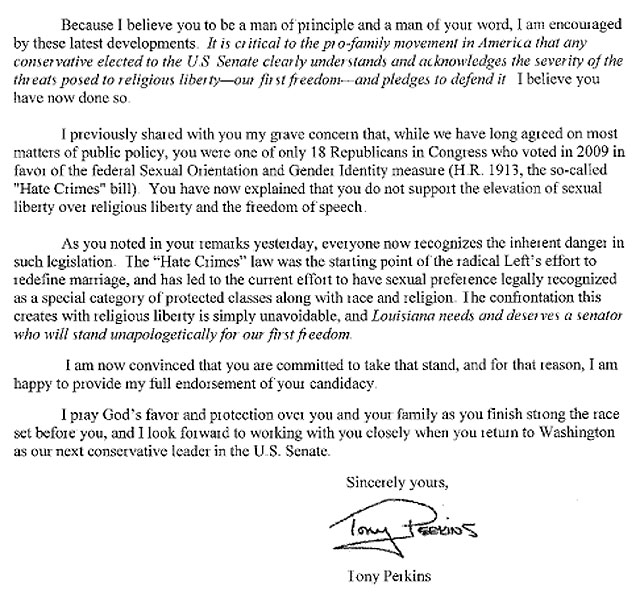 Cassidy’s vote on the 2009 Hate Crimes bill in Congress was a major sticking point with Perkins and many of the other activist social conservatives in the state, and it’s a reason why Perkins took such a hard line against supporting him in the earlier stages of the campaign even despite the fact Cassidy’s rating on the FRC Action scorecard has been 100 for the past several years.

The bridge, which of course had to be built for the benefit of both parties, was the increasing number of examples in which the impugning of people of faith by the gay activist lobby served as a predicate for abuses of Christians. Cases in which Christians were prosecuted for a faith-based refusal to bake cakes or provide photography for gay weddings, or to provide venues or officiant services for those ceremonies, and the ugly spectacle in Houston in which that city’s openly lesbian mayor subpoenaed church sermons of pastors who had opposed its “Houston Equal Rights Ordinance” in an effort to smear them as bigots, made Perkins’ point that legislation like the Hate Crimes law Cassidy voted for is a step leading toward abuse of those with traditional views.

And for Cassidy, continued overreach by the cultural Left provided a justification for getting out of the box his vote put him in with Perkins and the other reticent social conservatives.

The lesson here, beyond the obvious political expediency of uniting Republicans behind Cassidy and providing space on his bandwagon for all comers, is the cultural Left and the gay lobby has badly overstepped its mandate. When the question is whether the law provides adequate protection for the safety of homosexuals from violent thugs and bigots who would do them harm, lots of people with solid conservative credentials could see clear to vote as Cassidy did out of a sense of decency and fairness. When that question then morphs into whether the law should coerce people into giving up their freedom of association and religious observance out of runaway political correctness, the divide is much easier to resolve.

How much of an asset is Perkins’ endorsement? One could argue Cassidy was destined to get the vast majority of the vote Perkins influences, particularly given that his opponents’ FRC Action score is only a 15. But it’s a loose end Cassidy needed to tie down in advance of the runoff, and it definitely adds to the sense of momentum his campaign is certainly picking up this week. And for Perkins, it’s a way to escape the political problem his statement of Tuesday night created; namely, a refusal to endorse someone with a 100 score from his organization. Perkins gets more than that, though; he secures a promise from Cassidy that as things currently stand the prospective Senator will be on the side of social conservatives in fighting the increasing aggression of the cultural Left on religious liberty.

UPDATE: Along with Perkins’ endorsement, Cassidy also received a message of support from another of Louisiana’s heavy hitters among faith-based conservatives, Gene Mills of the Louisiana Family Forum…

“Senator Mary Landrieu has muddied the waters of pro-life progress in Louisiana. Landrieu has received a zero percent record on the life issue since her re-election in 2008 and voted to publicly fund Planned Parenthood. That is not a Louisiana value. In fact, Louisiana is the most pro-life state in the nation for the fifth year in a row according to Americans United for Life.

Congressman Bill Cassidy, your clarification regarding your commitment to religious liberty and free speech encourage my soul, and I believe will motivate other values voters throughout Louisiana to enthusiastically embrace your candidacy for the Senate.”

Interested in more national news? We've got you covered! See More National News
Previous Article BACKFIRE! Watch Mary Landrieu’s Twitter Attack On Bill Cassidy Crumble Before Your Eyes
Next Article An Enormous Amount Of Work Is Being Done To Unify The Right Against Landrieu