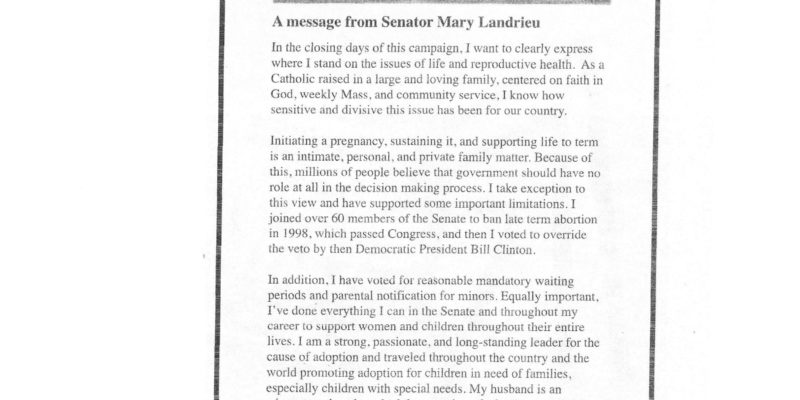 In a last-minute ad campaign by incumbent Sen. Mary Landrieu (D-LA), the long-term Senator misleads Catholic voters into believing that she is moderately pro-choice and sort of pro-life.

If you have been following Landrieu’s tenure as a Louisiana Senator, you know this to be false. Check out the ad right here, which ran in the Lafayette Daily Advertiser and then our fact-check below: 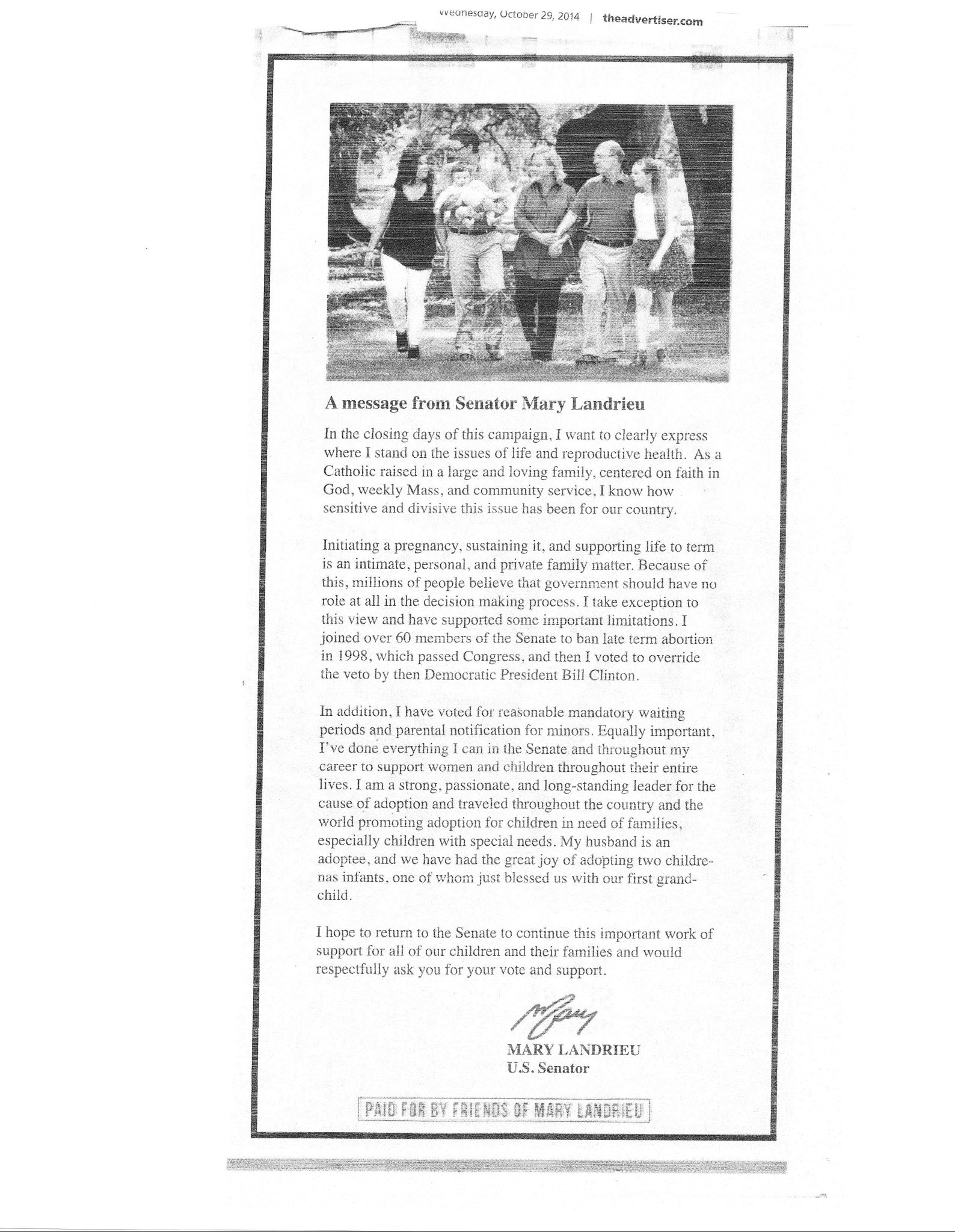 And now the fact-check:

Landrieu just this year attacked a new state law that passed with bipartisan support which will shutter three of the state’s five abortion clinics, claiming that Gov. Bobby Jindal supported it for political reasons.

In an interview with POLITICO, Landrieu, who is ‘personally pro-life, but policy-wise pro-abortion,’ said Jindal’s record on abortion is “very troubling” and not in line with “serving the people of Louisiana.” However, polling shows that 58 percent of the state is pro-life.

Referring to Rep. Katrina Jackson’s (D-Monroe) restrictive abortion bill, Landrieu was clearly left-of-center on the matter, even though the bill flew through the legislature with bi-partisan support.

“Some of the bills being passed around the country are just very intrusive to personal decisions and very harmful to women and girls, you know, to their physical health and life. It’s a shame,” Landrieu said. “20 weeks is not the norm for being able to live outside of a hospital.”

So Landrieu is clearly left-of-center on abortion, but not so fast. Because of the right-ward shift on abortion issues in the state and across the country for that matter, Landrieu is now trying to paint the picture that she has been a centrist on the issue, granted POLITICO helped her along the way with this tale.

The three-term centrist lawmaker explained that while Republicans want to paint the politics of abortion rights as all or nothing, she maintains a nuanced position that defies the traditional pro- and anti-abortion rights labels.

“Nothing on this subject is easy to explain. I have kind of a different record than most. I’ve voted against late-term abortion, I voted for access in the … pre-viability [period],” she said. “Although I personally believe that life begins at conception, I believe the last place the government needs to be is in the church, in the doctor’s office or in the bedroom. And so even people who advocate for less government intrusion, like Gov. Jindal, get themselves in the most personal decisions a family could ever make.”

Defying the “traditional pro- and anti-abortion rights labels?” Landrieu’s record shows that she actually voted againstevery pro-life piece of legislation in the Senate since her re-election in 2008.

Here’s a bit of a breakdown on Landrieu’s pro-abortion record:

So this is the ad the Louisiana Right to Life ran today to remind voters: 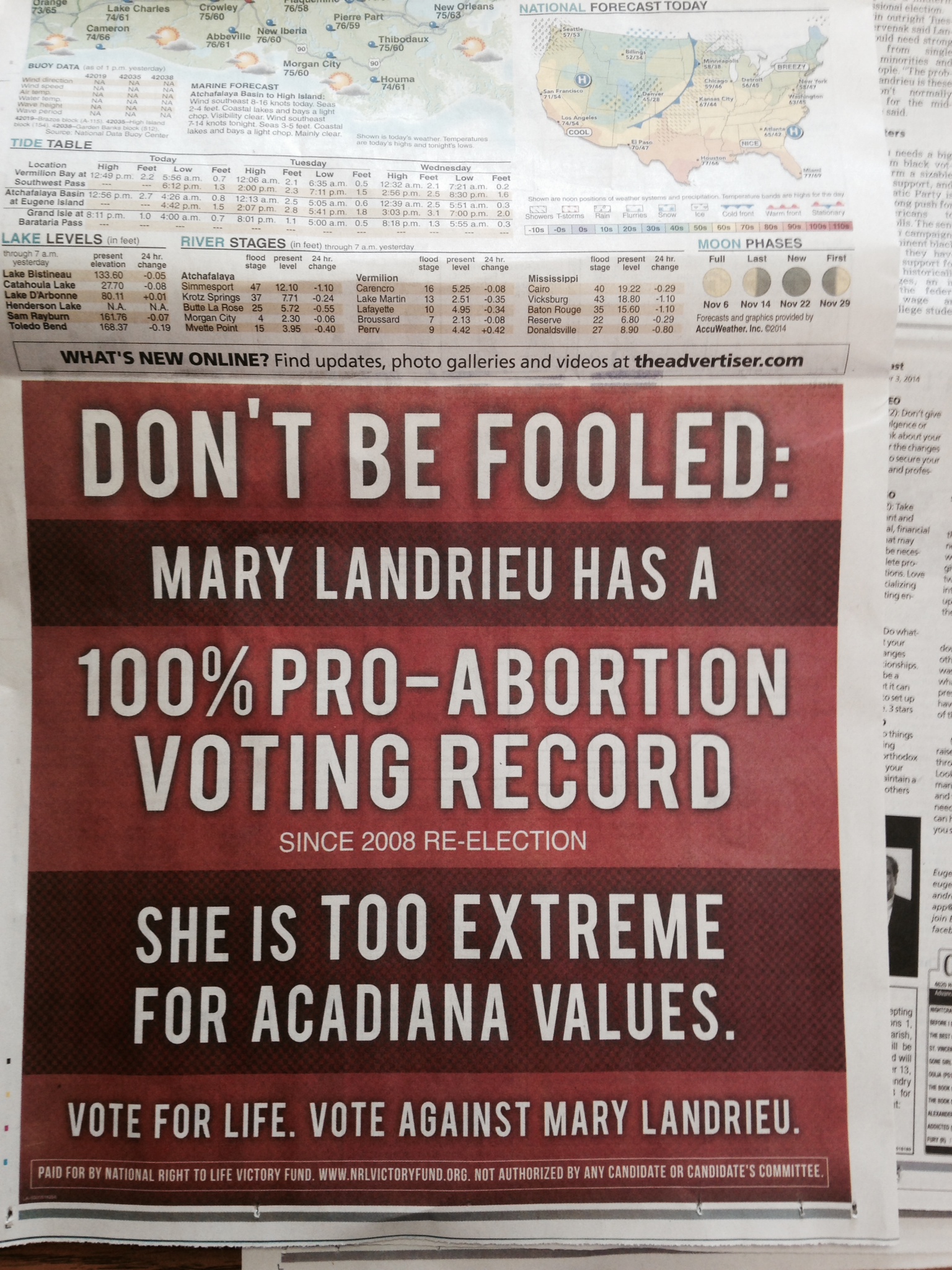 Interested in more national news? We've got you covered! See More National News
Previous Article Family Research Council’s Poll Has Maness Ahead Of Landrieu
Next Article BAYHAM: Republicans On The Cusp Of Victory