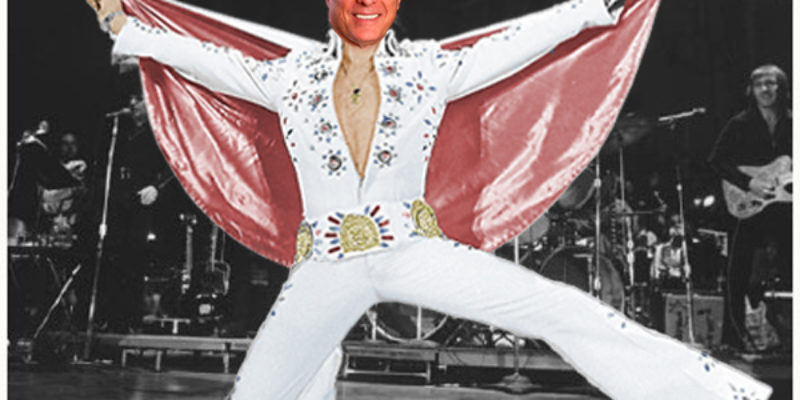 We got a runoff election, and Mary Landrieu’s gonna get a political dirtnap in not too long, and comin’ up fast behind it is next year’s statewide cycle. So you can’t be surprised when the video surfaces of our “Republican” attorney general serenadin’ Mary Landrieu at DC Mardi Gras earlier this year Elvis-style.

Yeah, you heard right. Buddy Caldwell’s an Elvis impersonator. Which is kinda cool, in an old-fart-from-Monroe sorta way. And back in February when DC Mardi Gras was goin’ on it was a big rumor that Caldwell had shown up at one of Mary Landrieu’s events and done his Elvis impersonation for the assembled hooples.

More than a rumor, actually. Everybody said they saw it. And the Republican insider-type people were grumpy about it. “Some Republican,” was the thing. And they went lookin’ for somebody good to put up against Caldwell, which they found when Jeff Landry got in the race.

Turns out there was video of Caldwell’s lil’ concert. This you gotta see.

You might not recognize the touchy-feely guy with Mary without his Dr. Seuss hat or his bike cop uniform on, but that’s Kip Holden, Baton Rouge’s goofy mayor. Who wants to be Lieutenant Governor. Culture and tourism, and lots of huggin’, dontcha know.

So naturally there’s a PAC out there friendly to Landry that got hold of the video. Restore Our Republic PAC, which used to be Jeff’s PAC but is now run by Tom Graves, the congressman from Georgia who he’s friends with from the time he spent on Capitol Hill, figured this was worth makin’ an ad about, so they did – they hit Landrieu and Caldwell all at the same time.

We’re gonna have us one hellaciously good AG’s race next year, y’all.