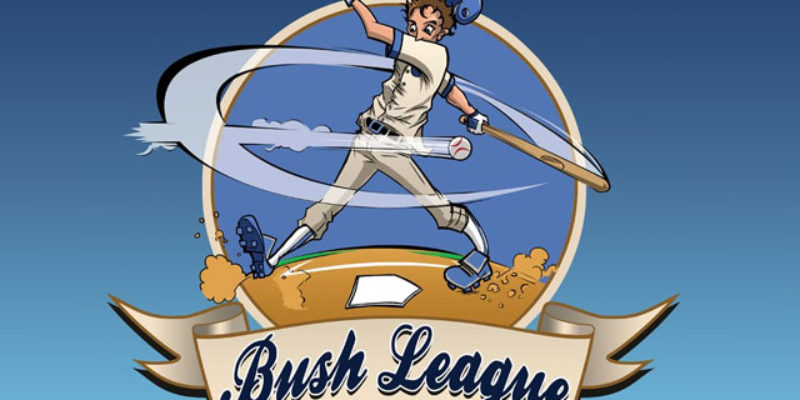 With a headline like that, you would think Edwin Edwards would have to be involved. But you’d be wrong.

No, the idiocies described below actually involve the four top Republicans running against Edwards. We’ll describe the antics involving three of the four here; the fourth will wait until Wednesday.

First, there was this – a “Voter Guide” put out by the Dan Claitor campaign as an attack on Garret Graves. It said this…

Well, Graves lives in the Garden District in Baton Rouge. He does own a house in DC, but as his wife mentioned in a comment under a Hayride article from a couple of weeks ago…

The story on the house? Bought first home at the peak of the DC housing bubble, bubble popped, needed to move family due to new job back home. Sell house at a loss of $150,000+ and go bankrupt or rent it.

As for private sector experience, the correct answer would have been “not a lot” rather than “none.” Graves worked for his father’s engineering firm off and on and in a number of other positions not especially indicative of a career in the private sector. The accusation is fundamentally true, or at least there’s a valid point to be made with it, but it’s gratuitous.

And then there’s the government experience section, in which Claitor’s camp touts that he was an “Assitant DA under Harry Connick.” When you’re trying to make the point that your opponent didn’t graduate college, you probably don’t want to misspell your own resume.

Plus, there is the question of Graves’ governmental bio. Yes, he was an intern for John Breaux who was a Democrat. But by the time he went to work for Billy Tauzin, Tauzin was a Republican. Tauzin switched to the GOP in 1995, after Newt Gingrich and the gang used the Contract With America to engineer a House takeover in the 1994 elections. That was long before Graves became a congressional staffer. The piece doesn’t mention that he served as a staffer for Republicans on the Senate Commerce, Science and Transportation Committee and the House Energy and Commerce Committee, or that he was the Republican staff director of the U.S. Senate Subcommittee on Climate Change and Impacts. Or that he ran the Coastal Protection and Restoration Authority for Gov. Jindal.

The Gulf Coast Ecosystem Restoration Task Force was established by an Executive Order signed by the President on October 5, 2010.  EPA Administrator Lisa Jackson was selected to chair the Task Force.  Each of the five Gulf State governors was asked to recommend an appointment to the panel.  Today’s announcement names three of the five governors’ choices for task force members.  The two remaining State Representatives will be appointed soon.

The task force’s mission is to coordinate efforts to implement restoration programs and projects in the Gulf Coast region.  It also will coordinate with the Department of Health and Human Services on public health issues and with other federal agencies on ways to enhance the economic benefits that ecosystem restoration will bring to the region.

In other words, the Gulf Coast Ecosystem Restoration Task Force was  one of those federal boards where the governors of the states involved – Alabama, Florida, Mississippi, Louisiana and Texas – each nominated their choice to serve on it and the Obama administration accepted the nominations. You could call that “Appointed by Barack H. Obama (D)” if you want, but it’s a pretty cheesy attack.

So as campaign propaganda goes, Claitor’s attack on Graves was pretty bush-league work.

The problem is, Graves actually went one worse with a mail piece that hit boxes around the 6th District, and particularly in Livingston Parish, late last week… 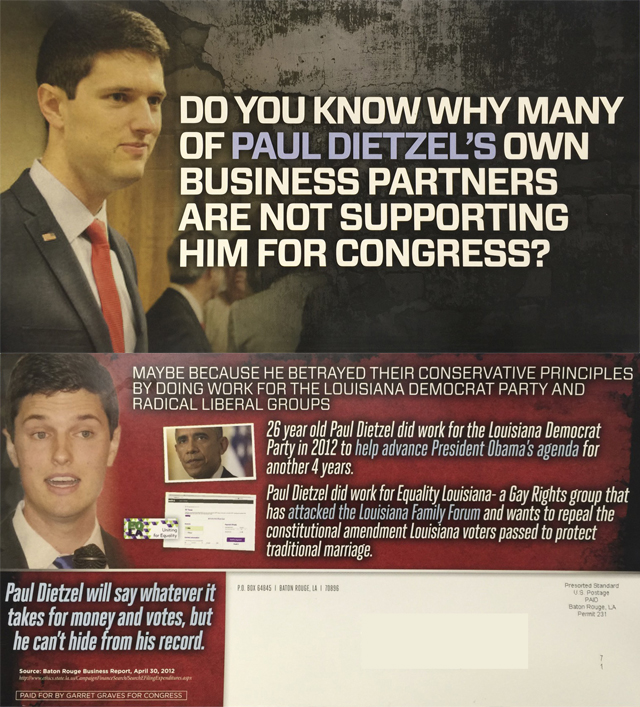 The mail pieces claim Dietzel, 28, “worked for” the Democratic Party in 2012 and that he “worked for” Equality Louisiana, a gay rights group that the mailer says “has attacked the Louisiana Family Forum and wants to repeal the constitutional amendment Louisiana voters passed to protect traditional marriage.”

“Do you know why many of Paul Dietzel’s own business partners are not supporting him for Congress?” the campaign piece reads in all caps.

The mailer cites a 2012 article from the Baton Rouge Business Report — a profile that highlighted Dietzel’s work as an entrepreneur at his company, Anedot.

Anedot is basically an online donation system. The 2012 article noted that Dietzel’s company had honed in on that year’s political campaigns and was being used by groups from both parties.

Kevin Roig, Graves’ campaign manager, stood by the mailer in a quote given to the paper…

“The facts are the facts, and the voters deserve to know the truth,” wrote Kevin Roig. He reiterated the claims from the mailer.

It is disappointing that Garret Graves would create lies to advance himself. This is not only morally unacceptable, but also it is exactly what is wrong with the system that Garret has been a part of for 20 years. Does he not have enough money to come up with something positive about himself?

As a Christian and conservative, I have not spread lies or made attacks against my opponents and do not plan to start now. The people of our district deserve the truth, not desperate attempts to defame a candidate’s character and business. Here are the facts:

1. Six out of twelve investors of my company maxed out in donations to my campaign and others donated smaller amounts. There was no expectation for my investors to support my campaign in any way whatsoever. There is no quid-pro-quo in the Dietzel campaign. Anedot does not require investors to be involved in politics.

“I’ve been friends with Paul Dietzel for several years and was an early investor in his company. He is honest and follows through on things he promises to do.” – Lod Cook

“I am voting for Paul Dietzel II, not because of his grandfather, but because Paul II is an innovative young man with strong work-ethic. He is cut from the same cloth as his grandfather and I am very pleased that we have the opportunity to send someone to Congress who is not an ‘inside-the-beltway’ career bureaucrat or politician.” – Jerry Dumas

3. I have never worked for President Barack Obama or helped him in any way – in fact, my donation history from 2012 is pretty transparent and can be easily found using FEC.gov.

4. Anedot is a software company used by thousands of customers across the country every day that provides political campaigns, non-profits and other causes the technology to securely collect donations anywhere, whether in person or online. In no way does the company “work for” or support any customer, just like Ebay does not “work for” everyone who has ever bought or sold a product using its technology.

It is ironic that a career bureaucrat who has never held a job in the private sector is now attacking my record as a small businessman. Garret Graves must really be worried that all his money can’t buy him this election.

Unlike Garret Graves, I have never worked for a Democrat, accepted an appointment from President Barack Obama, allowed the unconstitutionally raiding and removal of more than $50 million from Louisiana’s Coastal Wetlands Trust Fund, accepted campaign donations from most liberal Democratic PACS/activists or owned a residence in one of the most expensive areas of Washington, DC.

The Graves mailer really seems like a head-scratcher – his internal polling shows him far ahead of Dietzel and Claitor, he’s got TV ads running in droves while Dietzel isn’t even on the air and Claitor barely has a spot on the tube, he received the Times-Picayune’s endorsement last week (such value as that contains, to be sure)…so why would you throw out a goofy mailer like that which is going to irritate more people than it attracts and make your campaign’s image go from being a squeaky-clean, first-class outfit to a renegade bomb factory right before the election?

Dietzel, who is all of 28 years old, all of a sudden looks like the adult in the room. Not that it’s too hard to accomplish that feat given the way things are going in the 6th.

UPDATE: Scratch that last line, because Dietzel jumped into the bucket with the rest of the crabs yesterday…

Unlike Garret Graves, I have never worked for a Democrat, accepted an appointment from President Barack Obama, unconstitutionally raided and removed more than $50 million from Louisiana’s Coastal Wetlands Trust Fund, accepted campaign donations from most liberal Democratic PACS/activists, been endorsed along with Mary Landrieu by a liberal newspaper, owned a residence in one of the most expensive areas of Washington, DC, or questioned as to my association with millions of dollars of state contracts funneled to family and campaign supporters when working for Gov. Bobby Jindal.

Pretty much everything in that unfortunate screed is dishonest as well.

Graves was an intern for John Breaux when he first started working in DC – for two months. That was Claitor’s charge we covered above. So is the business about accepting an appointment from Obama. The $50 million “raid” is a bit hard to pin on Graves since he wasn’t actually the governor, Jindal was. There was an environmentalist PAC that backed Graves, mostly because he had a background in coastal restoration and a personal connection to a former Buddy Roemer chief of staff who now works with that PAC, but “most liberal Democratic PACS/activists” would be an accusation Graves has the unions backing him and so forth, which is hardly the case.

The Times-Picayune endorsement is what it is, but attacking him for getting the endorsement is hardly a mature or effective bit of political advocacy. The fact that Graves owns a house in DC when he worked up there isn’t exactly damning. And the state contracts angle is a left-wing hit put out by the mouth-breathers at Louisiana Voice who equate Army Corps of Engineers contracts awarded prior to Graves’ assumption of his role with CPRA with CPRA contracts.

Dietzel would have been far better off just ridiculing Graves’ own-goal of a campaign mailer rather than to repeat a bunch of dopey charges in Claitor’s piece. We now officially have all the Republican campaigns playing in the bush league.