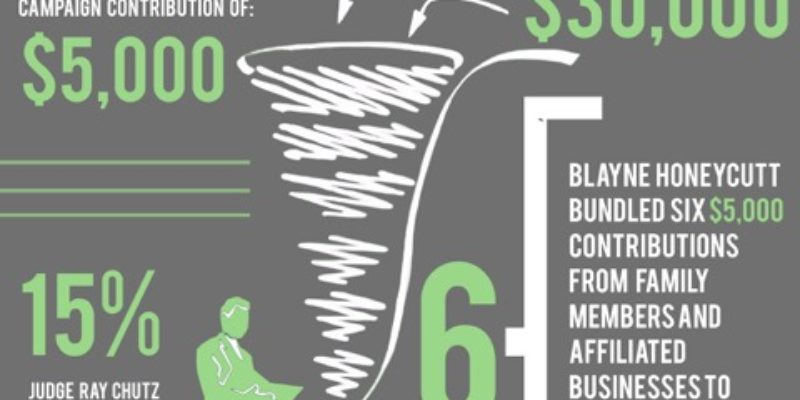 Are campaign donations corrupting Louisiana’s courts and undermining our system of electing judges?  It is no secret that lawyers, as a group, routinely dump money into judicial races to help finance expensive TV ads and glossy direct mail pieces in support of certain judges and judicial candidates.  But the tactics recently employed by Blayne Honeycutt, of the notorious Fayard Honeycutt law firm, highlights the extraordinary influence one motivated trial lawyer can have over an aspiring judge. Here’s how it happened:

Judge Chutz will assume his new seat on the appellate bench in January 2015.  In the meantime, one can only speculate on the impact that Honeycutt’s fundraising efforts will have on the judge, but you don’t have to be a cynic to conclude that the injection of such a large bundle of cash creates, at a minimum, the appearance of improper influence.

The Louisiana Code of Judicial Conduct effectively bans judicial candidates from directly soliciting campaign contributions from donors.  In theory, the friends and family of judicial candidates are supposed to form a committee to solicit donations so that the candidates themselves can be one-step removed from the process.  But this system is widely recognized as a farce, since judges and judicial candidates have to sign their campaign finance reports where each donation is disclosed.  In the instance of Judge Chutz, I’m sure it would be hard to overlook  $30,000 that arrived on the same day and originated from one lawyer and a handful of people with whom he is closely associated.

What’s more is that this tactic of using massive campaign contributions to influence the outcome of political elections appears to be standard operating procedure for Honeycutt and his law partner, Calvin Fayard Jr.

Fayard, a trial lawyer deeply involved in the Gulf oil spill litigation, found himself at center of a legal battle for apparently playing fast and loose with campaign finance laws in 2013 when his daughter Caroline was running for Lieutenant Governor.  He survived that political scandal, and it seems the negative press attention did nothing to curb the firm’s contribution habits.

Altogether, Honeycutt and Fayard have used their law firm, business partners and family members to donate more than $276,000 to elected officials across the state since 2009. A large number of those contributions went to judges.