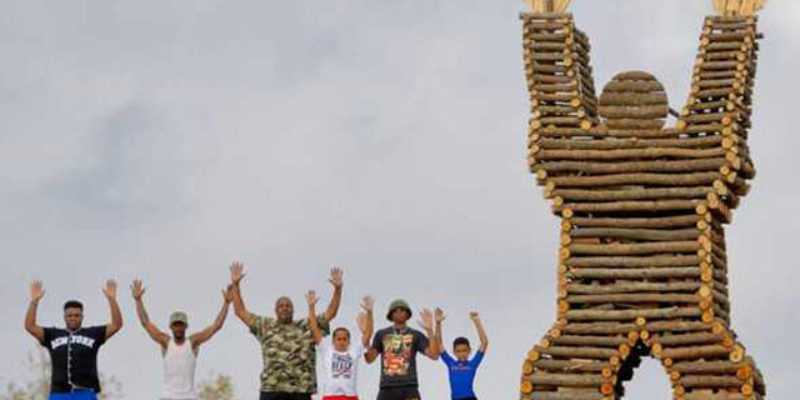 Mike Brown, meet Santa Claus. Maybe you can strong-arm him out of some Christmas presents.

Following months of protests and demonstrations over the killing of Michael Brown, an unarmed black teenager who was shot by a white police officer in suburban St. Louis, a group of River Parishes residents have built a 17-foot-tall wooden structure in Lucy that shows the “hands up, don’t shoot” gesture that has become synonymous with protests against the August killing, which spurred a national debate about ongoing tensions between law enforcement and the black community.

The bonfire is ready to be set ablaze Wednesday night, along with many more traditional constructions that typically line River Road this time of year in a tradition that dates back to the 1800s.

Brown, 18, was shot and killed in the middle of a street. The incident has become a flashpoint for controversy. A grand jury’s decision not to charge Ferguson Officer Darren Wilson for his role in the incident ultimately set off a string of sometimes violent protests in Ferguson and major U.S. cities.

“We just got to talking about it, and with all the stuff that’s going on, we decided to do something just to show some solidarity, a little tribute and something different, something unique,” said Harold LaGrange, a Lucy resident who helped organize the effort. “It started out talking about having one hand in the air — like a No. 1 — but the more we started getting into it, we decided, ‘Let’s do the “hands up” gesture.’ ”

First of all, do we need to repeat this once again? “Hands up, don’t shoot” is a lie. If Mike Brown actually had his hands up he’d be alive today – or at least he wouldn’t be dead due to Wilson’s bullets.

It’s not like we haven’t had time to vet the Ferguson controversy and the truth of what happened there. It’s not like intelligent people in this country don’t already know that Brown didn’t have his hands up, and that instead he was attacking a cop.

Some questions – does Harold LaGrange have a rap sheet? Is he a crook? Is this Crook Christmas on the Levee? Is he an Al Sharpton fan? Or are he and his pals just ignorant?

Either way, they’re bringing a bunch of divisive, misguided idiocy to a proud Louisiana Christmas tradition, and they’re likely to start fights up and down that levee.

And here’s hoping Harold LaGrange isn’t the victim of a crime. The local law enforcement authorities might be less than excited about coming to his aid should something happen, unless of course they’re a lot more professional and responsible than he and the rest of his crew.


Interested in more news from Louisiana? We've got you covered! See More Louisiana News
Previous Article Looks Like One Problem Is Solving Itself…
Next Article SADOW: Shockingly, Experience Is Showing Medicaid Expansion’s A Bad Idea