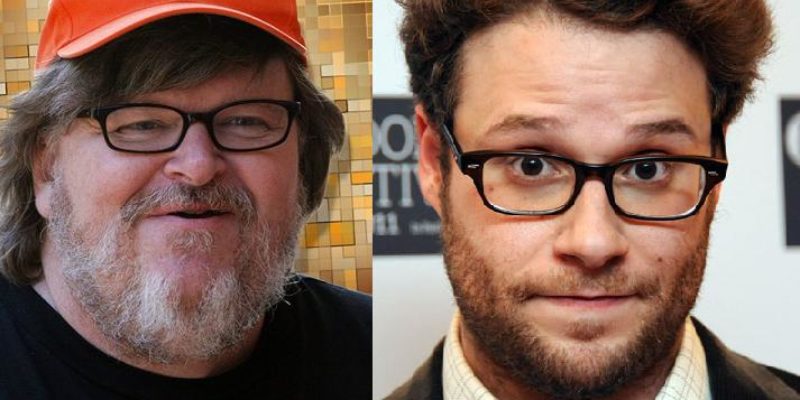 First, here’s what each of these two Hollywood elitists said:

Michael Moore on ‘American Sniper’ via Twitter: “My uncle killed by sniper in WW2. We were taught snipers were cowards. Will shoot u in the back. Snipers aren’t heroes. And invaders r worse”

Seth Rogen on ‘American Sniper’ via Twitter: “American Sniper kind of reminds me of the movie that’s showing in the third act of Inglorious Basterds.”

While these two elites enjoyed their comfortable lives being able to make off-color comedies and far-left conspiracy-driven documentaries, Chris Kyle was fighting for their freedoms to exactly that.

Moore could not be more of a hypocrite, considering he is swarmed by bodyguards everywhere he goes. Must be nice to live protected constantly.

And Rogen just recently directed the film “The Interview,” which depicted an attempt to kill North Korean Dictator Kim-Jong Un. The movie took tons of flack from North Korea and brought about the entire Sony hacking scandal. Rogen defended the comedy as his right to free speech.

Yet, he must forget that his right to free speech would be stripped from him if it weren’t for American heroes like Kyle.

Kyle saved countless lives during his four tours oversees fighting for the freedoms Hollywood elites like Moore and Rogen seem to take for granted.

Meanwhile, “American Sniper” has opened with a $90.2 million opening weekend and is set to make $105 million over the MLK Holiday weekend. Here’s a list of records the film has already broken via Variety:

The Largest January Weekend Ever (Previous record: “Avatar” with $68.5 million)

The Largest Drama Opening Weekend Ever (Previous record: “Passion Of The Christ” with $83.8 million)

The Largest Wide-Release Debut for a War Movie (Previous record: “Pearl Harbor” with $59.1)

Interested in more national news? We've got you covered! See More National News
Previous Article And Now, Some Videos Of Hippos Chasing Boats…
Next Article One Thing We Found Out At SOTU…