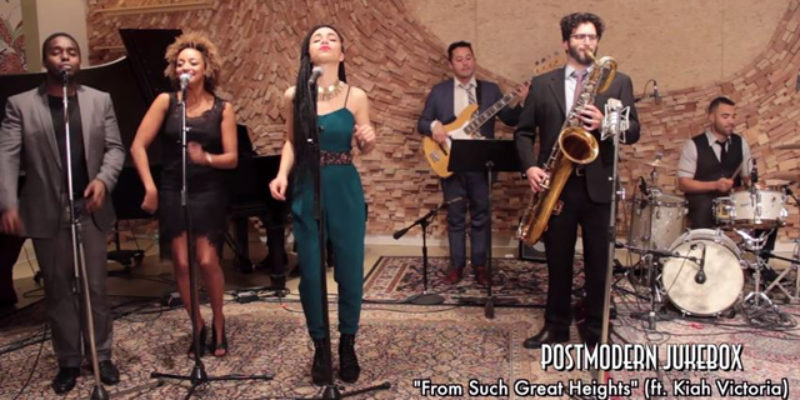 We haven’t done one o’ these in a while, so I’ll break us back in easy. I’m only givin’ you the song and then one cover of it. Quick and easy for y’all.

Here was the song. It’s about 12 years old, and The Postal Service, which was a band out of L.A. that broke up two years ago. This song was pretty much their one-hit wonder track, and it got a lotta play in commercials – UPS used it in an ad, and so did Apple, M&M’s and Kaiser Permanente.

Such Great Heights has gotten covered a few times. Ben Folds did a good job with it, there’s a totally different take that Iron And Wine did, which makes for a pretty good lullaby if you need one, and another band called Confide you prolly never heard of did, er, somethin’ unusual with it.

But for our purposes, we’re gonna trot out the most interestin’ cover of the bunch.

They cover songs. It’s all they do. They’re like that Pentatonix band we like so much who also covers lots of songs, except unlike Pentatonix these guys use instruments. In fact what they do is, they take rock and pop and rap songs and they rearrange them in more classic forms.

For example, with Such Great Heights they took a techno song and redid it as somethin’ the Jackson Five would do. And it sounds freakin’ great.

Cool, huh? We may have to do some more of these with the Postmodern Jukebox guys. They’ve got a lot of ’em.