So says Gallup, the same organization which last week called Louisiana one of the most politically competitive states in the country.

Now, they’re saying you can’t get much more conservative than Louisiana is. 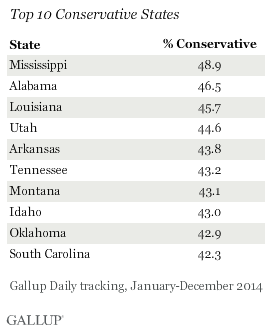 The most liberal states aren’t much of a surprise… 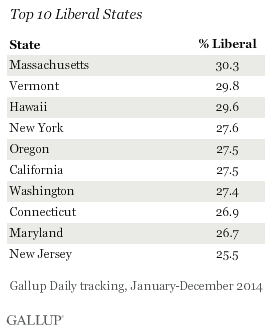 Here’s something interesting as a measure of the current trend…

We know Louisiana is drifting rightward. Now we’re seeing a concrete showing of that fact.

But how do you square the ideological blowout in the state with the fact that Republicans and Democrats are so close in party ID?

Probably the jungle primary. You can be a registered Democrat and it won’t make a bit of difference in who you might vote for. If there were closed party primaries in the state, you’d want to register as a Republican if you lean that way, because otherwise you wouldn’t get a chance to vote for a candidate who might most closely represent your views. With a jungle primary you could belong to any party you want and vote for whoever you want.

The elimination of the jungle primary might well become an issue in this spring’s legislative session. Both parties are talking about it; the Republicans for obvious reasons and the Democrats because they can’t hardly find candidates anymore outside of majority-black districts and when you’re not actually running candidates as a political party you’re not actually raising money. At some point that becomes a problem the Louisiana Democrat Party has to address – and from a strategic standpoint their only hope of winning elections on a wide scale in Louisiana again is for the GOP to begin choosing far-right, out-of-the-mainstream candidates in party primaries and giving them an opening to the middle. In a jungle primary setting that isn’t likely to happen, because right now Republicans occupy the middle and conservatives can almost get to 50 based on the Gallup numbers.