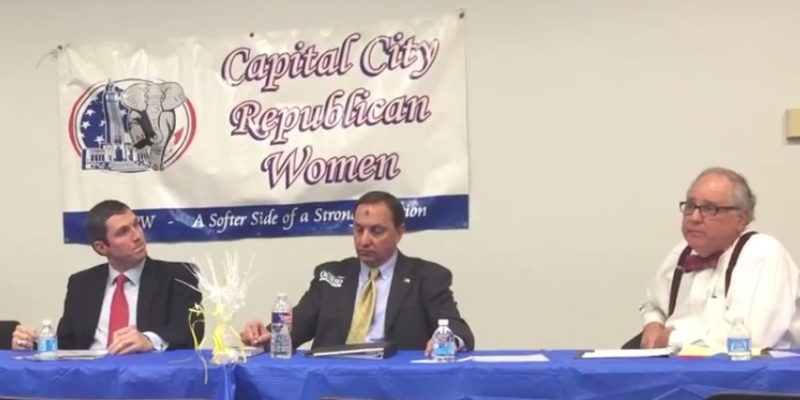 It got a little heated at the Capital City Republican Women’s Stump Speech event.  According to attendees Rick Bond attacked Buddy Amoroso and called him the No candidate and said that we had to be realistic and look at potentially raising taxes.

” You’re right, I’m going to vote no on new taxes. The people are taxed enough. Too often the knee jerk reaction of politicians is to raise taxes in a fiscal crisis. Raising taxes ins’t the answer. We need to grow our economy and create more tax payers and we need to look at how we spend money in this state. You and I cannot spend more than we take in with our personal budgets and state government should be no different. We must address the declining revenue and increased spending by state government. Not raise taxes.”

Along with the “to be or not to be” argument on raising taxes, Common Core was a hot topic as well.

Each candidate was asked to comment on the Stump Speech/Forum event:

“I opened by presenting an false and deceptive mail piece that I received from Mr. Amoroso’s campaign. He did not defend the accuracy of the piece or address his reasons for spreading falsehoods about my positions. Following the introductions, we debated a wide range of issues in response to questions from the moderator and the audience for approx. 1.5 hrs.”

“Last night, at the Republican Stump Debate, I announced two of the bills I will pre-file when elected to the State Legislature.  My first bill will be to authorize the creation of independent school districts in Louisiana.  The second bill will be to use GARVEE bonds to finance the construction of a new bridge across the Mississippi River South of Baton Rouge.

My campaign is about proven leadership and having the most experience to provide real solutions to solve our important issues!”

“Last night events was another opportunity to highlight the fundamental differences between myself and the other candidates. They can call me the no new taxes candidate if they want. I take it as a compliment. I believe our citizens are taxed enough.”

And even though Susan Nelson was not included in the forum (because she is not a Republican) she did attend the event and when asked to comment she shared the following:

I was at the forum that I wasn’t invited to speak at. I thought they might give me the chance to speak, but they did not, and that’s fine, organizational rules are rules.

I thought it was a great event and I appreciate my opponents acknowledging my presence there. I was disappointed that as a woman’s event more women’s voices weren’t represented. Only two questioners were women, and one was the mother of one of my opponents. There are fewer women in the legislature than there were 20 years ago and last night demonstrated just how much women’s voices are missing from the democratic process.

There are a lot of women’s issues that are being left off the table, one is my big concern about the cost that elderly widows must pay to reclaim their property after a spouse dies, with or without a will. In East Baton Rouge Parish (19th JDC) to just file the paperwork is $485. That’s without a lawyer. I worked in the Elder Law Clinic at Southern University Law Center and many of our clients were elderly women whose homes had sustained storm damage in one of our recent storms. They couldn’t cash the insurance check because it was made out to their deceased husband, and thus could not repair their house because they had not taken control of the property. Our laws have put a burden on these women at a time when they lack the resources, and often times emotional capacity, to make legal decisions that have significant impact on their ability to manage their own homes. We should look at the laws and these problems and start making some allowances to help these women out (it happens to men too, but the women are more likely to survive their husbands). Something as simple as capping the filing costs could go a long way to helping these women reclaim their property.

I’ve worked in workforce development, education (as a volunteer and a professional), healthcare, government acquisition, homeland security, elder law, workers’ compensation law, and most importantly, child law including everything from laws protecting children from predators to what sorts of solutions are out there to keep kids occupied when they aren’t in school. These are all complicated issues and I’m the only candidate in this race who has firsthand experience in all of these areas. Not just making laws, or running a business (though I’ve done both) but actually seeing how these systems work and where they could work better.

“CCRW is aggressive in educating voters during election season with the olé fashioned stump events which allow citizens to compare and contrast republican candidates before voting.”

Joshua McNemar, who attended the event, shared his thoughts with me saying:

“A large portion of the time spent during the question and answer forum was related to taxes and whether each candidate would or would not support a tax increase. Although, an increase in taxes was not a first option for any of the candidates, all three candidates agreed that tax increases would be a last resort for transportation and infrastructure funding.

The voters of District 66 needs to ask themselves; Which candidate has the experience and capability to walk into the House Chamber and be effective on Day 1, representing the Capital City with a conservative voice and willing to work with the Governor on solutions that benefit the people, not the politicians.”