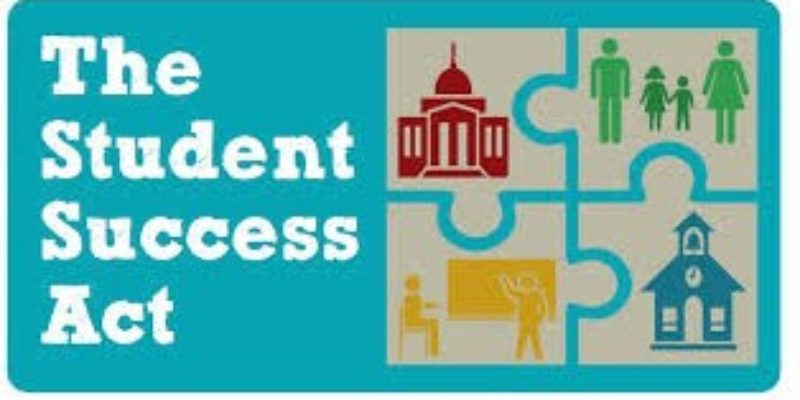 When I read the title of HR5, “Student Success Act”, something just rubbed me the wrong way. I have followed enough bills and acts (a lot of acting going on in D.C.) to know that their titles are usually the opposite of what will result. ie: “The Affordable Care Act”, “the Patriot Act”, ETC.  HR5 is on a fast track vote for Thursday, Feb. 26th. That is another red flag considering the bill is over 600 pages long. Is this another one of those “we have to pass it to see what’s in it” circumstances? That didn’t work out well the last time. Not for the American people anyways. 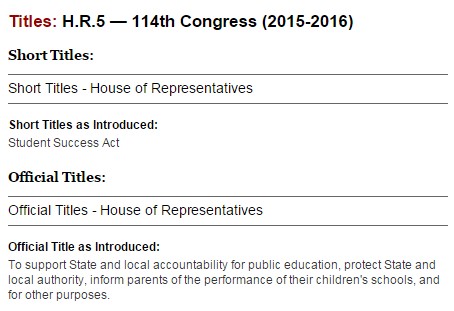 So I decided to take a deeper look into HR 5. The CBO has information on their website that gives some detail about the bill. However, I wanted more detailed explanations for what it actually means for regular folks. Below you will find the CBO info and also information from https://whatiscommoncore.wordpress.com  that breaks it down by page number. 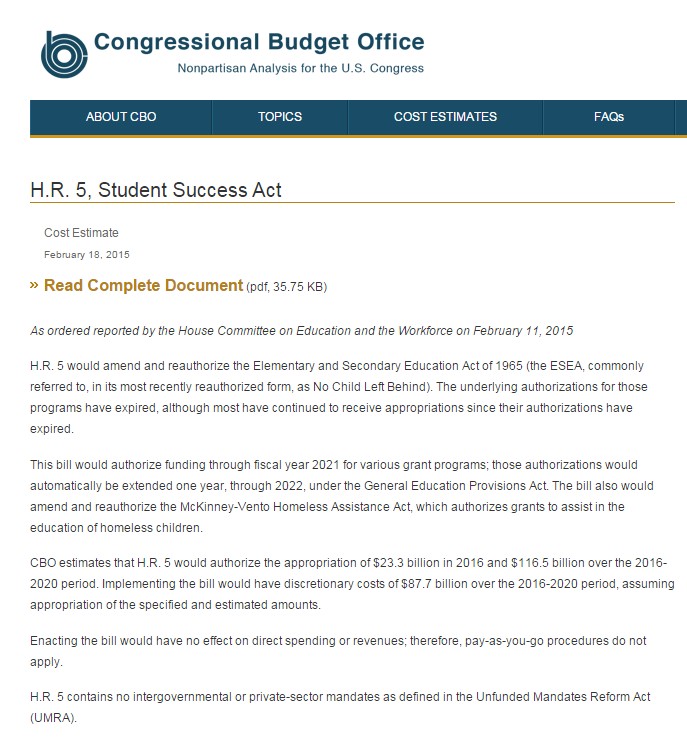 This one is such a betrayal.

I’ve never been so shocked and angry over a proposed Congressional bill that I burst into tears.  Not until tonight.

I’d been quietly reading and taking notes on H.R. 5, “Student Success Act” (SSA) when my husband simply, offhandedly asked me how I was doing.   Though I’d been quiet, I was boiling over as I read tucked-away portions of this 600+ page bill which,  despite the local-control-touting, anti-Common Core-sounding words (on page 10 and elsewhere), is terrible. When my husband asked how I was doing, I stood up, walked to the couch and explained through my hot, angry tears what destruction and reduction of vital freedoms will take place if this bill passes:

It ends private schools’ religious freedomfrom government control.  Itharms funding freedom in private schools.  Itputs into question parental rights and control over education.  It pushes sameness of testing.  Those are just a few things.  There are more.

We have conscious deceivers in D.C. pushing this bill:  its damages are so painfully ironic.  The bill is touted specifically to “reduce the federal footprint and restore local control while empowering parents“. What a poignant lie.

If H.R. 5 passes this week, in exchange for billions in federal funding, we will be crushed in the following ways.  The federal Department of Education aims to take over:

H.R. 5  the “Student Success Act” won’t be enforced for five years– plenty of time for its promoters to plan implementation, and for the opposition to burn out, give up, to feel there’s no way to rein it in.

The bill is 600-plus-pages long but was just barely introduced this month; and it’s being fast-tracked for a vote thisweek.  Those whose lives will be changed by it have likely never heard of it and elected reps haven’t had time to debate intended and unintended consequences.

Would our representatives vote to pass this bill if they knew that it included such hidden away, serious damages to Americans’ freedoms?

If you read no further, here’s the bottom line:

H.R. 5  is not a viable alternative to the terrible “Every Child Ready for College and Career” bill.

Please call reps and senators: Vote NO on H.R. 5, the Student Success Act.

If you would like to track the bill visit: https://www.congress.gov/bill/114th-congress/house-bill/5/text

There are 11 cosponsors of HR5.  There are 10 Republican cosponsors and only one Democrat. They are listed on https://www.congress.gov/bill/114th-congress/house-bill/5/cosponsors . 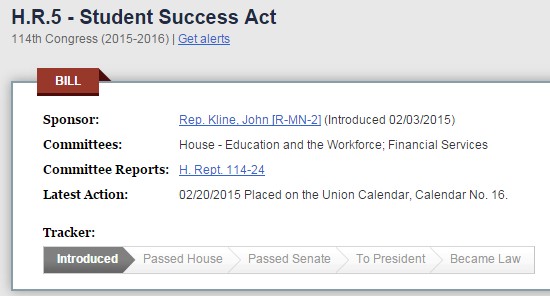 The group “Stop Common Core in Louisiana” posted on their facebook page for people to call Rep Scalise and ask him to vote no on HR5.  One of their reasons being that

“If you reference nothing else in the bill when calling make sure to reference Page 552-553 in which it clearly states if a State participates in federal funding grants and programs by vote of the legislature (which includes approval of federal money in the state budget) the state waives its rights and gives full authority to the federal government.” 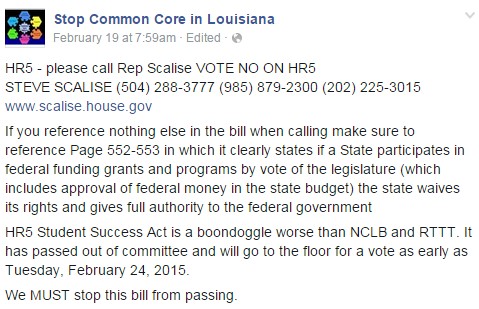 “The federal government is moving to get ahead of states in the school choice arena and it could effectively create a nationalized education system.”

House Resolution 5 (HR5) requires states who accept federal funds for school vouchers waive all rights to legislate or operate state level education. While the verbiage is written in the positive, implying that states retain their rights, that retention is tied directly to federal funds. Note, “the Secretary” is the Secretary of Education, currently Mr. Arne Duncan. (excerpts from HR5 filed in July 2013).

States to retain rights and authorities they do not expressly waive

Retention of rights and authorities

No officer, employee, or other authority of the Secretary shall enforce against an authority of a State, nor shall any authority of a State have any obligation to obey, any requirement imposed as a condition of receiving assistance under a grant program established under this Act, nor shall such program operate within a State, unless the legislature of that State shall have by law expressly approved that program and, in doing so, have waived the State’s rights and authorities to act inconsistently with any requirement that might be imposed by the Secretary as a condition of receiving that assistance.

Amendment of terms of receipt of Federal financial assistance

An officer, employee, or other authority of the Secretary may release assistance under a grant program established under this Act to a State only after the legislature of the State has by law expressly approved the program (as described in subsection (a)). This approval may be accomplished by a vote to affirm a State budget that includes the use of such Federal funds and any such State budget must expressly include any requirement imposed as a condition of receiving assistance under a grant program established under this Act so that by approving the budget, the State legislature is expressly approving the grant program and, in doing so, waiving the State’s rights and authorities to act inconsistently with any requirement that might be imposed by the Secretary as a condition of receiving that assistance.

What “requirement(s) might be imposed by the Secretary (of Education) as a condition of receiving (federal) assistance”? The answer is the Common Core standards. “States that adopted Common Core were awarded extra points on their applications for Race to the Top funding. A handful of states, including Texas and Virginia, did not adopt the standards. It is the promise of extra funding that Jindal says in the lawsuit coerces states into adopting the Common Core standards and “constitutes unlawful coercion that exceeds federal authority and violates the 10th Amendment,” the lawsuit says. The suit also objects to waivers given out by the federal government that Jindal says allows states to waive certain requirements if they adopt the Common Core.” Los Angeles Times, Louisiana Gov. Jindal sues feds, says Common Core violates states’ rights

If a state chooses to accept federal money, it waives all rights to operate its schools as it deems fit within its borders.

Interested in more national news? We've got you covered! See More National News
Previous Article SADOW: The Motion Picture Tax Credit Reform Bill Is Pretty Weak Sauce
Next Article They Will Tell You What (Or Whom) They Fear