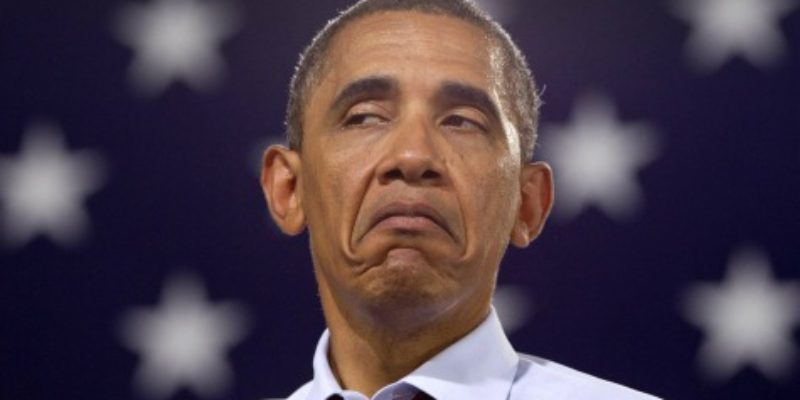 He says “people are responsible for terrorism.”

That was one of the points the president made at the summit on “Violent Extremism” held at the White House and presided over by the Vice President.

Obama refused to use the word Islam or jihad in his speech, which is par for the course of this administration, and he doubled down on State Department spokesmoron Marie Harf’s insistence – which she thinks is over the heads of us rubes in flyover country – that jihadis just don’t have enough jobs. Kevin Williamson at National Review, in a rather depressing piece (wrongly, in our estimation) making the prediction we will lose the civilizational struggle with Islam because we’re too much like Marie Harf and not enough like the heroic defenders of Western civilization of old, did have a strong point in that for the Marie Harfs of the world who cover the payroll of our government, a good job is the be-all and end-all of human existence…

At the CIA, Harf was “promoted” from Middle East analyst to press liaison, which does not suggest a rich intellectual life. She then went to work for the Obama campaign and, as a reward, was installed in another media-relations job, at the State Department. It may be that she reads Marcus Aurelius in the original Greek in her spare time and has a life of deep spiritual communion, but all perceivable indications are that she is a familiar modern type, a person whose life is defined by the social status and economic station associated with a job, whose education (B.A. in political science, Indiana, M.A. in foreign affairs, Virginia) was organized around securing such a job, and whose life ambition is to move through the cursus honorum associated with her class and sense of self-worth, whether that means highly paid sinecures (the Chelsea Clinton model) or seeking elected office as a form of self-validation (the Sandra Fluke model). If you are Marie Harf, there are very few problems that a good (or better) job cannot solve.

And if you are Marie Harf, there are few catastrophes in life greater than the inability to secure a good job. We are not nearly so worried about getting into Paradise as getting into Princeton — assuming that we make the distinction at all.

America is not Marie Harf, though Obama more or less is.

And we can say this based on the quality of his argument.

Obama is correct that “people” are responsible for terrorism, though only in the broadest sense. It’s people, as opposed to elephants or marmots or aliens, but in the context of Obama’s statement it’s specific people.

The president and his minions refuse to identify the enemy when the latter has clearly stated who they are, and this is highly troublesome. It’s troublesome because it fits a pattern of Obama’s inability to speak clearly to the challenges this country faces or act decisively on the part of the American people against those who would do us harm. And no, killing Osama Bin Laden doesn’t exempt him from scrutiny on this score.

When Obama is willing to clearly define his enemy and stand firm against him, it’s in the context of domestic policy disputes and his enemy is the Republican Party.

Conservatives and Republicans are Obama’s main enemy. He will break federal laws to harm them politically, he will use the federal bureaucracy to restrict their freedoms, he will seek to change the entire character and even the demographics of the country in order to render them harmless.

But he won’t even call Islamism or jihad by name as our most prominent national security threat.

Isn’t it interesting that Obama says “people” are responsible for terrorism, but rejects that same analysis when it comes to gun violence?

Interested in more national news? We've got you covered! See More National News
Previous Article DIETZEL: Government Shouldn’t Monopolize The Internet
Next Article SADOW: Another Shot At A UNO-SUNO Merger In The Offing?