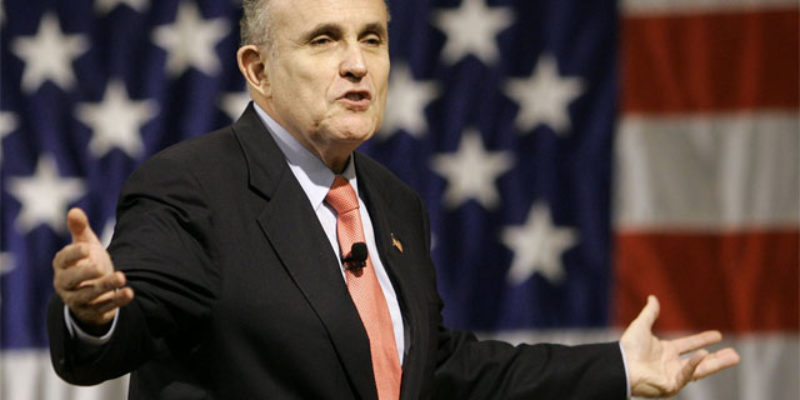 This business of Obama’s patriotism or lack thereof that Rudy Giuliani brought up is a good – and long overdue – discussion.

It comes down to this: the Left and Right in this country see patriotism and love of country in very, very different, in fact incompatible, ways.

The Right loves America, period. It loves it as it is, or at least as it perhaps used to be.

That’s not really the way the Left loves America. The Left loves what they think they could make of America if only they had the power to do so.

Ask a liberal what they love about America and you’re likely to get Social Security, Medicare and the civil rights movement. The civil rights movement is fine, of course, but the Left used it to bring in the Great Society which has been a total disaster. In any event, what they’ll boast about are the chief liberal achievements in social and political change.

But if you ask a conservative, what you’re going to get is something different. A conservative is going to say things like putting a man on the moon, baseball, the Statue of Liberty, John Wayne and the Normandy landings – things which might have had a relationship with government action but were more closely associated with the individual excellence of great Americans or our inherent goodness as a people.

From the perspective of a conservative, the latter is patriotism and the former is most certainly not. A liberal would counter and say the former are examples of things we can do when we “pull together” for the greater good, and build on that to discuss the need for more.

You can’t really reconcile the two. They’re completely different definitions of patriotism. And while it might come off as dirty pool, if I’m one of the GOP strategists trying to galvanize public opinion against the Democrats I am going to challenge the patriotism of every Democrat running for office and make them explain how it’s more patriotic to grow the government and tax the people more rather than letting the folks alone to live their lives and continue building the greatest country in the history of the world.

It will be called “despicable” and “ugly” and “hateful” and whatever else, but the Democrats have a poor argument in defense of their patriotism. After all, Barack Obama called George W. Bush “unpatriotic” for raising the national debt more than he has as Bush’s successor, and from Vice President Joe Biden and Obama we’ve heard the ill-advised framing of “economic patriotism” in attacking American business for seeking the most tax-friendly conduits for its capital. Obama himself has issued so many quotes which can very reasonably be interpreted as hyper-critical of America at minimum if not downright unpatriotic, not to mention his association with Bill Ayers and Jeremiah Wright, that he’s exceedingly vulnerable on that score.

This is an issue which isn’t going away, and Giuliani’s timing in raising it given the administration’s weak responses to world events was very appropriate.

Republicans need to make the voting public understand they’re the party who loves America for the Americans. The party hasn’t always done a good job of that, and in so doing they’ve missed out on some great opportunities. Because Democrats don’t love the Americans. It’s not love to try to buy people off with free stuff while patronizing them with imperious rule-making and an avalanche of provable lies.

Giuliani’s on solid footing and needs to carry this as far as he can. There is an open field for him to run with this issue.

Interested in more national news? We've got you covered! See More National News
Previous Article HUDSON: How Do The District 66 Candidates Stack Up On St. George?
Next Article And Then There’s The Peculiar Mosul Invasion Plan…