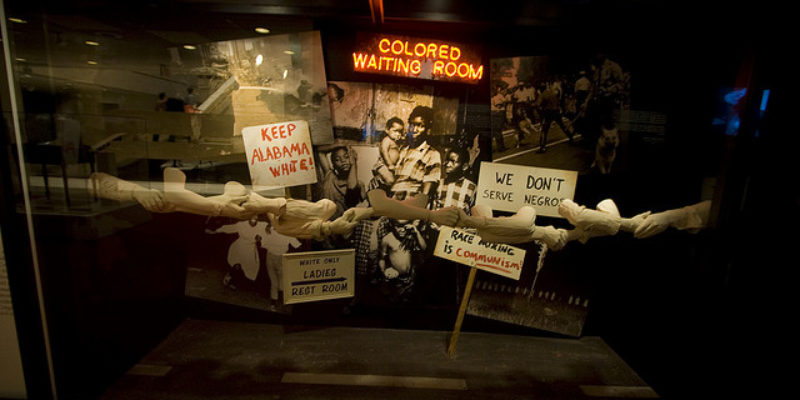 But we have come full circle. The Huffington Post published an op-ed by a Canadian college student demanding racial segregation because “ethnic minorities deserve safe spaces without white people.”

The writer, Aeman Ansari, argues that safe spaces or racially segregated zones are necessary in this day age. Just for background, this is in response to white journalists being kicked out of a meeting by a minority student group at Ryerson University in Toronto. Here are some of her reasons:

It’s not just important, but it’s essential, for marginalized groups to have safe spaces on campus to engage with people who understand what they go through. Though this group is funded by Ryerson’s student union, it works to serve a particular group and a particular purpose. Many students at Ryerson have encountered racism in their life that is impossible to forget and many are exposed to discrimination on a daily basis. This group and these sort of events allow people of colour to lay bare their experiences and to collectively combat this societal ailment. These spaces are rare places in the world not controlled by individuals who have power, who have privilege.

These spaces, which are forums where minority groups are protected from mainstream stereotypes and marginalization, are crucial to resistance of oppression and we, as a school and as a society, need to respect them.

“Safe spaces” isn’t just a phenomenon for the racial grievance types, there are some some people who claim to be libertarians that love them too. What they are is segregated places where nothing that hurts their feelings are allowed. Now I’m all for treating people with respect, but there has to be a point where we stop wrapping people in bubble wrap. The world is a cruel, nasty place and we should teach people to stand up to bullies instead of cowering from them in “safe places.”

It is ironic today’s progressive “social justice warriors” (SJWs) are now defending segregation when they’re the ones doing it. I wouldn’t expect SJWs to come out against anti-discrimination laws anytime soon.

Everyone who loves liberty needs to become familiar with Cultural Marxism. It’s the means by which the progressive elites in the media and academia seeks to divide and conquer. They like to pit groups of people against each other with an agenda of grievances and resentment and by dividing people into “privileged” and “oppressed” groups. If you’re white, male, and Christian; you’re “privileged” and if you’re not, you’re oppressed. This is regardless of your individual circumstances. The ultimate end goal is destroying individual liberty and capitalism.

If people of different races and cultures mingled and spent time together, people would see each other as people instead of how different they are. Look at Millennials, who are the most diverse generation in American history. Millennials are seen as a “post-racial” generation, much to the disappointment of SJWs.

Another favorite trick of SJWs and Cultural Marxists is to use the language of freedom to restrict it. Take for example, the feminist outrage over pop star Meghan Trainor’s new video because the song, “Dear Future Husband,” is about wanting to be treated like a lady. Trainor is choosing to adopt more traditional gender roles, but that’s a no-no to feminists.

Now if someone wants  a minorities-only “safe space” on their own private property, I don’t have a problem with it. I have a problem though if it’s genuinely public property such as a university where everyone has equal access under the law to every space. There is also a hypocrisy issue here. If minorities can have “safe spaces” on private property, white people should be allowed to have similiar spaces, as moronic as it would be to bring back segregation.

Social justice warriors and progressives are not interested in racial healing and bringing us together as Americans. They’re too busy wanting to dismantle capitalism and individual liberty to want that. Enough is enough and these people need to be exposed and defeated.