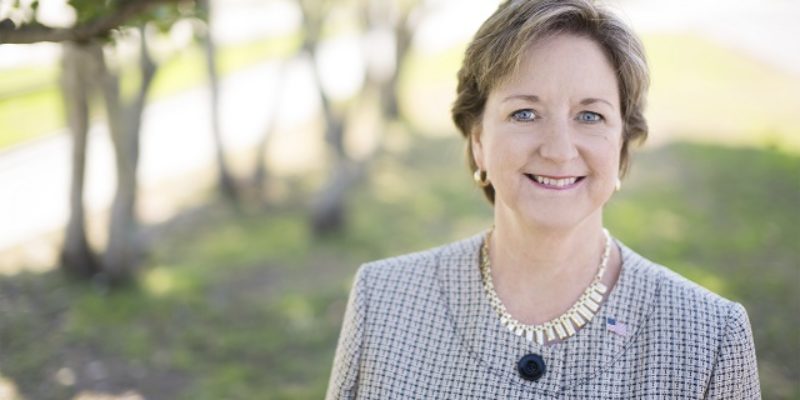 One of the most interesting State Senate races this year will be in District 1. The district includes all of Slidell and Pearl River in east St. Tammany Parish, parts of New Orleans East and Irish Bayou, most of St. Bernard Parish, and parts of Plaquemines Parish. The area has been represented by State Senator A.G. Crowe since 2007.

However, this year it’s safe to say Crowe will be facing his toughest challenger ever in Sharon Hewitt. Hewitt, a Slidell resident and Vice-Chairwoman of the St. Tammany Parish GOP, announced her candidacy for the seat today. According to a press release sent out by the Hewitt campaign, here’s why Hewitt, an engineer and community leader, decided to run:

“It’s time for solutions, not politics,” said Hewitt. “People are tired of career politicians. As an engineer, I am a problem solver. It’s time to stop the political games and get to work. Throughout my life, I’ve earned leadership roles where my passion, organizational skill, collaboration with stakeholders and ability to inspire others has helped solve problems. I will use my skills and abilities to help the people of this district.”

Hewitt announced her candidacy at Slidell’s The Wine Market, which is a more upscale cafe in the city. Although the event was at 4PM on a weekday, the venue was full and featured many St. Tammany business and community leaders. Also in attendance were two St. Tammany Parish Councilmen, three members of the St. Tammany Parish School Board, and former U.S. Senate candidate Col. Rob Maness; although it is unclear if they endorsed Hewitt.

In an eight-minute speech, Hewitt set to distinguish herself from Crowe as someone who solves problems. Hewitt began by asking the audience by raising their hands if they had ever been involved with a small business or if they’ve ever had a family budget. She said:

“Our state is swimming in debt. Our education system is in disarray. Our elected leaders are flip-flopping from one crisis to another with no vision for how to get us out of the mess we’re in. Sometimes we wonder, are our leaders more interested in politics than solutions. More interested in scoring polticial points than helping people. What’s going on in our government scares me and it makes me mad. We need solutions, not politics. I’m in this race because I’m a problem solver and I want to be your next State Senator.”

Hewitt talked about her experiences working for Shell Oil and why she walked away from the job to become a full-time, stay-at-home mom. Then she discussed her involvement with building a recreation facility at Camellia Park in Slidell that is set to be voted on in the May elections. She is the Chairwoman of the Board of Commissioners for Recreation District 16, which is seeking the 8.9 mill property tax levy to build the park.

Hewitt said she made the decision to run after a Sunday school lesson and sermon in her church a few Sundays ago.

“So what does God have in store for me in this next chapter of my life? I’ve been thinking about this question and praying about it for sometime. A few Sundays ago, Stan (her husband) and I were in Sunday school and the lesson was about responding to God’s call. That lesson really spoke to me. After Sunday school, we went into the sanctuary and the minister began her sermon by reading the relevant Scriptures. Line by line, she spoke the Gospel to the entire congregation. Until she looked right at me as if there was not another person in the church. Then she said, “you have to use your gifts to do God’s work whether it’s on the national, state, or local level.” Now I don’t think national, state, or local level has ever been used in the history of sermons. But she said that day and I knew I had my answer.”

Hewitt then portrayed herself as anti-establishment candidate by promising to “read the bills before they’re voted on, not after them.” She also pointed out that she doesn’t have “16 years of incumbency” and she hasn’t “been part of the political and hasn’t been part of the problems we now face.”

Hewitt also made clear in her speech that education was going to be a major theme of her campaign. The Hayride asked her about her thoughts on Common Core after her speech:

Education is a very important issue. I think there’s a lot of common ground. Part of our problem is that people are pretty quick to take sides and in fact what we need to be doing is focusing on the common ground. I believe in high standards, I believe in testing, I believe in teacher evaluations, and having student performance be part of a teacher evaluation. And I think those are all great things to build on and I believe those will change quite a bit between now and October.

The Hayride also asked Hewitt about how she planned to reach out to St. Bernard and what she had to say to St. Bernard Parish voters, given that her ties are overwhelmingly to Slidell.

I’m ready to come meet St. Bernard. I want to understand their issues and I’m looking to represent the entire district. People in St. Bernard will be some of my first phone calls tomorrow.

Hewitt also pointed out that she had friends who lived in St. Bernard pre-Katrina but moved up to Slidell after the storm that were planning to introduce her around the parish.

Hewitt’s campaign manager is Jay Connaughton, who is regarded as one of St. Tammany Parish’s best campaign consultants.

As of writing, State Senator A.G. Crowe’s office had not responded to a request to comment from The Hayride. [See update below]

“I have and will continue to serve honorably and to the best of my ability representing the citizens of Senate District 1 (St. Tammany/Orleans/St. Bernard/Plaquemines) for one last term.  It is an important and serious responsibility that demands hard work, a willingness to always be available and to return phone calls to help those you serve, relationship/consensus building, legislative experience and seniority in order to be the most effective Senator.”

We clearly have a race.
Interested in more national news? We've got you covered! See More National News
Previous Article Here’s What Mary Landrieu Is Up To These Days
Next Article BAYHAM: CPAC 2015 Notebook