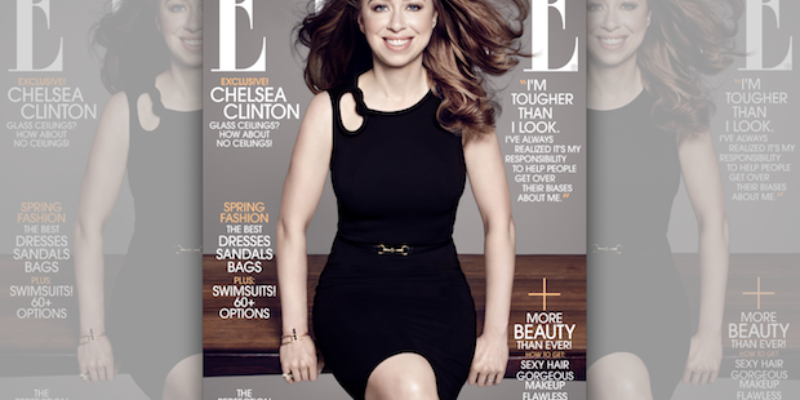 If you are unaware as to the movie referenced in this headline, you are more than likely not a Millennial. But whether you are a Millennial or not, you probably realize just how much the national press wants the general public, and specifically Millennials, to fawn over Chelsea Clinton.

As a woman who has made all of her money and fame off the backs of her career-politician parents, Chelsea Clinton is a far-stretch from an independent woman who worked to have her name recognized.

In fact, Clinton truthfully has never had a career outside of her parents’ wealth and her life was practically handed to her when her father, former President Bill Clinton, became president back in the 1990’s.

And yet, what we have seen in the last four months is the glamorization of Chelsea Clinton, though she has no accomplishments to her name and grew up as a wealthy, privileged heir to the Clinton political dynasty.

Clinton was named one of the “Women of the Year” by Glamour Magazine and then described by Katie Couric as “Mom of the Year.” Both of these titles were not earned, they were given to Chelsea because she is a Clinton.

As a way to force-feed Clinton to youth culture, it was most likely Hillary Clinton’s campaign that got Chelsea to pose and talk to People Magazine, Time Magazine and Elle Magazine. Of course, all of these are mostly left-leaning popular culture media outlets that attract a majority of women and youth.

In Time Magazine‘s depiction of Chelsea, the magazine goes gaga over Clinton, even going as far to have a photo gallery dedicated to “Chelsea Clinton’s Life In Pictures,” as if she is the equivalent to Diana, Princess of Wales.

Then, Time begins its false narrative that Chelsea is in-with-the-kids:

With her mother likely to focus on her family and her personal life more in this campaign than eight years, Chelsea will be a key voice. The mother-daughter duo’s connection on stage is apparent: Hillary calls her daughter “Chels,” and Chelsea feels comfortable correcting her mother. Chelsea’s natural connection with younger voters makes her an important complement on the campaign trail to her 67-year-old mother. Emily Lobbato, a 22-year-old who saw Chelsea and her mother at an event last month, says “Chelsea and Hillary remind me of me and my mom.”

Since when does Chelsea Clinton have a “natural connection” with young voters? Clinton had her college-career and now lifetime of work handed to her by her parents. Meanwhile, young people today are struggling to make it through college with a lack of opportunity in the workforce. How does Clinton relate to that in any way?

Then there was Elle Magazine’s sickening feature story and cover story of Clinton. Naturally, the fashion magazine talked to Chelsea about “the importance of having a woman president.” Shocker! Here’s an excerpt from the feature story:

ELLE: I was pregnant with my eldest daughter when your mother ran in 2008. I remember feeling that extra intensity you’re talking about and being really frustrated when people said that it didn’t matter if we had a female president, that it wouldn’t make any real change, that it was just symbolic. What do you think?

CC: We’ve made real progress on legal protections for women, but in no way are women at parity to men in our country in the workplace. And if we look in the political sphere, it is challenging to me that women comprising 20 percent of Congress is treated as a real success. Since when did 20 percent become the definition of equality? And so when you ask about the importance of having a woman president, absolutely it’s important, for, yes, symbolic reasons—symbols are important; it is important who and what we choose to elevate, and to celebrate. And one of our core values in this country is that we are the land of equal opportunity, but when equal hasn’t yet included gender, there is a fundamental challenge there that, I believe, having our first woman president—whenever that is—will help resolve. And do I think it would make a substantive difference? Yes, we’ve seen again and again, when women have been in positions of leadership, they have had different degrees of success versus their male counterparts, historically being able to build more consensus so that decisions have longer-term effects, whether in economic investments or in building social capital. Who sits around the table matters. And who sits at the head of the table matters, too.

How does a woman who has made her entire life’s earning off of her last name and her parents’ slush fund political foundation know and understand the trials and tribulations facing working women and moms today?

However, that is just it. Chelsea does not understand or relate to these struggles. But, that does not matter. What matters to the national press is lifting Clinton up to be this figure of womanhood and self-independence that she is not and never will be.

Back in 2014, Clinton was was of South by Southwest’s (SXSW) keynote speakers. Why would Chelsea be a speaker at a tech and innovation convention? For the same reason she was named “Woman of the Year,” because she is a Clinton.

While the national media likes to think Millennials are obsessed with Chelsea Clinton as much as they are, that is not true, in fact, it is quite the opposite.

Millennials do not live in the glory days of the Clinton administration when Chelsea had hair that looked like a poodle. Nor do they admire public figures who have made their name off their parents’ political dynasty, because they understand that while they are struggling to get by, it is a person like Chelsea Clinton who is given whatever she asks for, not because of merit, but because of her name.

So while the media can pretend that Chelsea Clinton is the epitome of 21st century youth and womanhood, we Millennials know better. We’re not stupid.