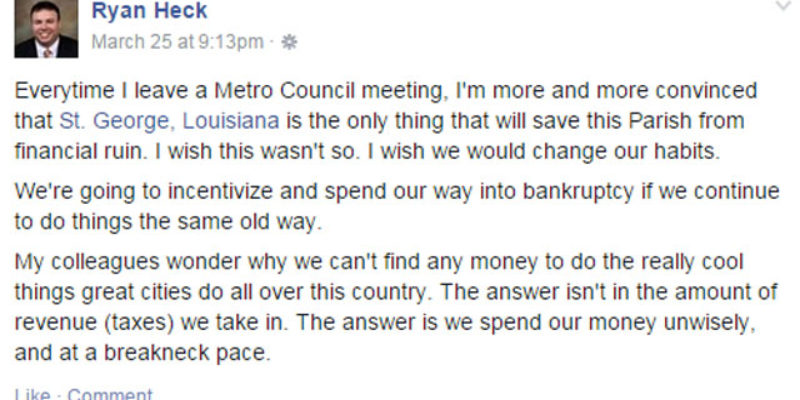 …and they show that East Baton Rouge Parish actually needs St. George to incorporate as a city or else it’s going to become Orleans Parish – or Detroit – at some point in the near future.

These and other factors, like births, led to a total population growth of just 0.2 percent: an additional 763 residents for the state’s most heavily populated parish with a population approaching a half million.

The parish’s birth rate and international migration basically carried the area’s population growth. And according to Louisiana demographer Elliott, Stonecipher, that’s not good.

International migration, it’s safe to assume, is mostly derived from Latin America, he said — mainly from Mexico. These newcomers mostly work in low-wage jobs, and in many cases are not in the country legally. Therefore, they pay little or no taxes.

Leaders of most metropolitans, and especially in Baton Rouge, actively seek to attract young, educated professionals who are currently busting at the seams in places like Austin, Texas, to grow and maintain their tax base.

While population data for Baton Rouge might appear to reflect younger, quality migrants, Stonecipher said it’s not likely the case. Hispanic migrants tend to be younger and of childbearing age, so international migration growth can be easily confused to suggest growth of quality, domestic migrants.

“(International migration) skews the assertion that (we) have an Austin-like phenomenon of in-migration from younger people,” Stonecipher said. “Baton Rouge is certainly not Austin.”

But William Daniel, the chief administrative officer for Baton Rouge Mayor Kip Holden’s office, said the administration feels good about the parish’s growth and questions the new estimates from the U.S. Census Bureau.

“We think the parish is growing, and we think (the growth) is very healthy,” Daniel said.

Leaders in the administration are “scratching our heads,” he said, over some of the census bureau estimates. Annual estimates tend to give lower growth numbers for the parish than are reflected in the decennial U.S. Census, which is based on an actual head count.

“I’m not sure what’s going on,” Daniel said of the census bureau estimates. “It’s our position that every month the parish becomes a more desirable place to live, more jobs are created (and) the future looks bright.”

The economic development the city’s been able to attract and the number of jobs added as a result, “just doesn’t seem to jive with the census estimates,” he added. “Usually when the actual numbers are finally done, it shows estimates were always very conservative.”

The article also quoted our buddy John Couvillon as expressing doubts about the accuracy of the census report’s numbers, but Couvillon also picked up on the obvious conclusion from the report.

And why? Everybody knows why.

“People really do vote with their feet,” Stonecipher explained.

He blamed suburban flight in the Shreveport area to Bossier Parish on high taxes in Caddo Parish. But in East Baton Rouge, the biggest factors Stonecipher said are prompting residents to pack up for the parish line are A) struggling schools; B) crime; and C) traffic.

The lousy schools aren’t as big a problem as everybody thinks, say the folks at the Baton Rouge Area Chamber, because five of the state’s top 10 school districts are in the Baton Rouge area. Except there’s a problem with that; the five are in West Feliciana, Ascension, Livingston, Zachary and Central – the very places people move to in order to escape the awful East Baton Rouge Parish public schools, which a BRAC survey found house about half of its students in “D” or “F” institutions.

That would suggest it’s likely a school district set up in St. George would do a better job. Hell, St. George could just decide to write everybody a check and encourage them to use it for tuition at whatever school they wanted and almost assuredly drive a better outcome than half its students ending up in “D” or “F” schools.

Meaning that St. George wouldn’t have to work too hard to be a magnet for the middle-class people who are currently decamping for locales outside the parish.

Two assumptions are made in the T-P piece which probably need challenging. First, Daniel is among those quoted pushing the party line that the parish’s leaders want young hipsters and yuppies to move into Baton Rouge, and the piece goes on at length about how the work that has been done to make downtown Baton Rouge a mecca for the arts scene is giving it a chance to attract millennials like Austin does and so on.

Daniel said the mayor continues to reach for the same goal — to make Baton Rouge “a very livable city.”

“He wants people to have opportunities to grow up and stay in Baton Rouge and raise their families here,” Daniel said. “If we saw signs that concerned us about the parish being in decline, we would be concerned. But we don’t see any of that.”

Anybody who actually believes that is nuts.

Holden and the crowd he fronts for might very well want to show off a bunch of hipsters who have moved into town and turned slums near downtown into some sort of southern-fried Haight-Ashbury, but at the end of the day the coalition that put him in office three elections in a row is very simple – rich white folks looking for fat government contracts and easy money floating around, and poor black folks voting the Democrat party line. There is a reason that the median income in East Baton Rouge Parish is $80,000 per year and climbing for white households and $30,000 per year and declining or holding steady for black households; it’s because policies coming out of Holden’s office and that awful school system for a decade have driven the middle class – black and white alike – to the suburbs.

And that 80K/30K breakdown is fertile territory for hegemonic Democrat control of the parish, which state party chair Karen Carter Peterson has publicly stated is that party’s goal. It wants to focus on local elections and building machines in places it can get a majority.

So the middle class is expendable. Don’t listen to what these people say, watch what they do – which is to drive the middle class out of Baton Rouge by failing to get a handle on crime, doing very little about traffic and protecting the awful public schools from any meaningful change. Especially if the capital region continues to grow and business continues to locate in East Baton Rouge; those middle class folks can live in Ascension and Livingston and so long as they’re still shopping and driving and working in East Baton Rouge the parish will still benefit from their tax dollars.

But that’s the second assumption which ought to be challenged.

And here, we’ll need to disagree with our guy Couvillon, who says that at some point the traffic problems inherent in packing so much of the economic infrastructure of the Baton Rouge area into downtown while so many of the people who work in those places live in Prairieville and Denham Springs will begin attracting folks closer to work. That’s one possibility. Another is that it isn’t just the employees who vacate the parish; the jobs will go next.

You can’t run off your tax base the way this parish is doing while presiding over a bloated $800 million governmental budget and not eventually cast a lecherous eye toward the business community. At some point the bloodsucking begins. And those businesses, particularly the smaller ones who are most mobile where the owner already lives in Prairieville and hated the commute, will be picking up and following the people. Less taxes, less crime, less of a commute. The bigger businesses will ultimately follow suit, but not necessarily to Livingston Parish. They’re more likely to decamp for Houston, Atlanta or Little Rock. Maybe they’ll just move to Covington or Lafayette.

The only thing that can stop it is a strong magnet for middle-class taxpayers inside the parish that will hold the demographic line, and the only real prospect for that is St. George. Yes, St. George would necessitate a major change in how East Baton Rouge Parish government works, but that’s merely an acceleration of something that needs to happen as it is.

Ryan Heck, in the Facebook post we screen-captured above, has it exactly right. Either St. George becomes a reality, or Baton Rouge declines into one of the Democrats’ failed cities. The census report shows that, whether the Powers That Be want to accept it or not.