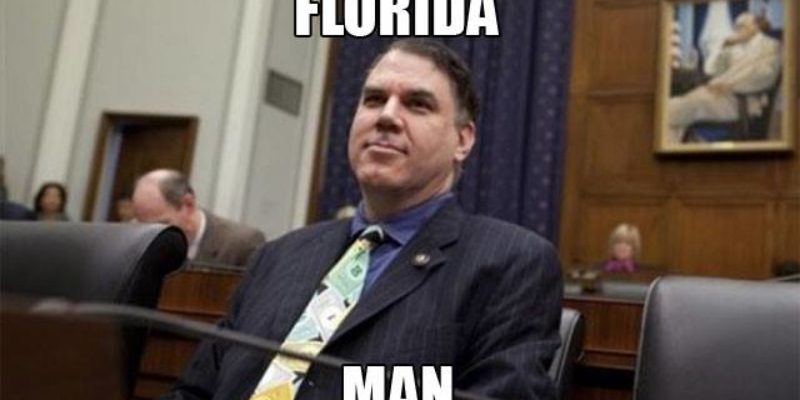 Democrat Congressman and weirdo Alan Grayson is thinking about running for the U.S. Senate seat being vacated by Marco Rubio. Grayson is trying to position himself as the progressive candidate in the Democrat primary. But Grayson has a problem, he has been busted for having offshore bank accounts which is a no-no for liberals because he’s probably avoiding taxes or something.

BizPac Review has the story of what happens when a reporter questioned him on it.

In a bush league move that can be filed with other notorious “Florida Man” headlines, the bombastic Democrat went off on a profanity-laced tirade against a Tampa Bay Times reporter who dared to question him about setting up offshore hedge funds that may serve as tax havens.

And Grayson, who has made a career out of attacking Wall Street fat cats and even ripped 2012 Republican presidential candidate Mitt Romney over offshore accounts, didn’t like it one bit.

He complained about Times political editor Adam C. Smith looking for “some stupid, bullsh*t story. … You want to write sh*t about it, and you can’t because not a single dollar of taxes has been avoided,” he fired at Smith.

The Times reported that Grayson’s financial disclosure statements show he has between $5-million and $25-million invested in one of the funds, and reports no income from it.

After complaining about an unrelated story of his girlfriend potentially running for his current seat, should he run for the Senate, the Florida Democrat took profanity to a whole new level.

“This is a whole nother level of bullsh*t. …Are are you some kind of sh*tting robot? You go around sh*tting on on people?” he asked Smith.

So Grayson went nuts when he was asked about his 1 percenter problems. This isn’t the first time Grayson has gone insane. He has a very long track record of it.

Grayson would actually be perfect for Florida in the Senate. Finally “Florida Man” can represent Florida.