Today Kentucky Senator Rand Paul went on MSNBC’s “Morning Joe” and he was asked about Lindsey Graham’s comments that a restrained U.S. foreign policy led to the rise of ISIS. Here’s what Paul said in response:

ISIS exists and grew stronger because of the hawks in our party who gave arms indiscriminately and most of those arms were snatched up by ISIS. These hawks also wanted to bomb Assad which would have made ISIS’s job even easier. They created these people. ISIS is all over Libya because the same hawks in my party loved Hillary Clinton’s war in Libya, they just wanted more of it. But Libya is a failed state and a disaster, Iraq really is a failed state or a vassal state now of Iran, so everything they’ve talked about in foreign policy they’ve been wrong about for 20 years and yet they somehow have the gall to keeping saying and pointing figures otherwise. 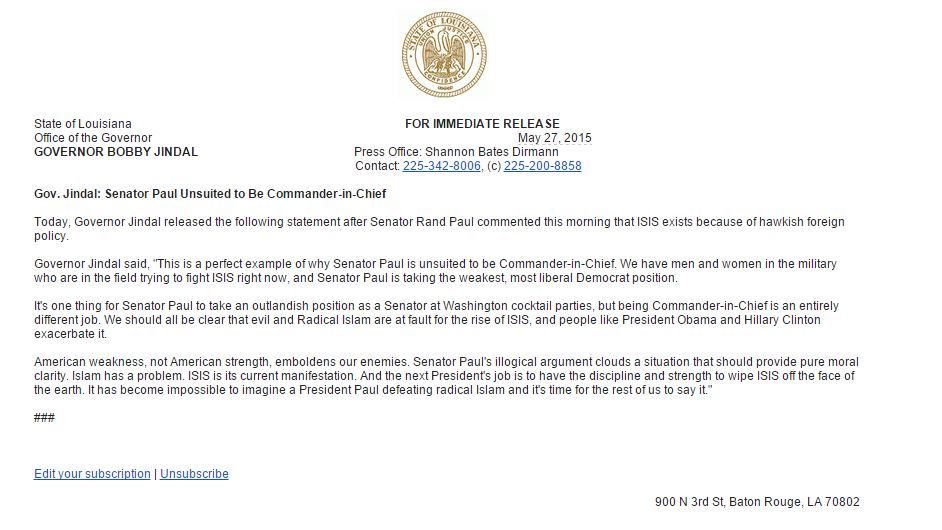 Governor Jindal is certainly positioning himself as a hawk in the race and this press release really isn’t surprising. However, it may be a violation of the Louisiana State Constitution’s ban on using public funds to urge the vote for or against a candidate, in this case Rand Paul for U.S. President.

C.B. Forgotston, who has been a thorn in the side of Jindal since he became governor, sent out an e-mail to his massive e-mail list pointing out that this press release is a violation of Article 11, Section 4 of the Louisiana State Constitution. He copied his entire list on a-mail to Stephen Street, the State Inspector General.

The below press release from the governor’s office is a violation of Louisiana Constitution, Article XI, 4. It clearly urges a vote against U.S. Senator Rand Paul for President of the United States. The press release was issued by state employees and has no disclaimer that public funds were not used.

If this is not a violation of the law, please advise why it isn’t.

A RESPONSE IS REQUESTED.

§4.  Prohibited Use of Public Funds

Section 4.  No public funds shall be used to urge any elector to vote for or against any candidate or proposition, or be appropriated to a candidate or political organization.  This provision shall not prohibit the use of public funds for dissemination of factual information relative to a proposition appearing on an election ballot.

I think C.B. is right on this one. The press release is a violation of state law because it was issued on official state stationary and released by state employees. Shannon Bates Dirmann is an employee of the State of Louisiana, not Jindal’s exploratory committee. The press release was written by Governor Jindal’s office, which is paid for by all Louisiana taxpayers.

Between this and his use of executive orders to make law, what does this say about Bobby Jindal’s respect for the rule of law?

Interested in more news from Louisiana? We've got you covered! See More Louisiana News
Previous Article Low Popahirum, May 27, 2015
Next Article Our Legislature Performs So Poorly Because – Wait For It – We Don’t Elect Enough Good People To The Legislature