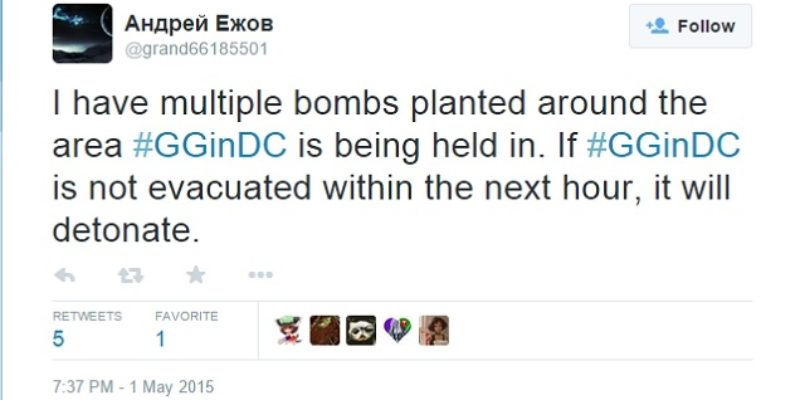 I’m in Washington D.C. this weekend for Americans For Prosperity’s RightOnline conference. At their Friday evening reception, I met up with a couple of conservative writers and friends of mine, the Washington Examiner‘s Ashe Schow and Daily Caller contributor and fellow R Street Institue policy analyst Mytheos Holt, and we hit the town. One of the events I was supposed to attend with them was a meetup of the supporters, writers, and pundits of #GamerGate. Unfortunately, I wimped out before I could make it due to fatigue and the fact my feet were killing me from walking all day.

What I missed was not only an event with Breitbart London‘s Milo Yiannopoulos, AEI fellow Christina Hoff Summers, and journalist Cathy Young in the same room; but also a bomb threat from the “tolerant” crowd. Yiannopoulos, Summers, and Young are among the conservative and libertarian journalists that have been promoting the #GamerGate movement, which claims to support ethics in gaming journalism and says that gaming development and journalism has been hijacked by the social justice warrior crowd.

Police arrived on the scene at approximately 12:15am, just over three hours after the meetup had kicked off. The evacuation began immediately, causing particular difficulty for the event’s two disabled attendees, who had to be carried down from the second floor. The other floors of the bar, which were occupied by regular customers, was also evacuated.

Attendees were initially told by the bar’s staff that there was a fire drill, but the presence of dozens of police officers including a K-9 bomb squad van suggest that the call had more to do with bomb threats that had been made against the event earlier. Police at the scene would not comment on the reason for their investigation, although more details will become publicly available in due course.

The bomb threat came after Salon columnist and #GamerGate opponent Arthur Chu tried to get the venue, Local 16, to cancel the meetup.

Hey @localsixteen just so you know there's an Internet hate speech movement meeting up at your place tonight http://t.co/MRcw2mqqqy

@Zennistrad @gamerfortruth Whatever, it's ending tonight with them meeting up there

After the bar owner told Chu to go pound sand, the bomb threats started on Twitter. This is what we can expect from the left. If you disagree with them, you will be shut up one way or the other.