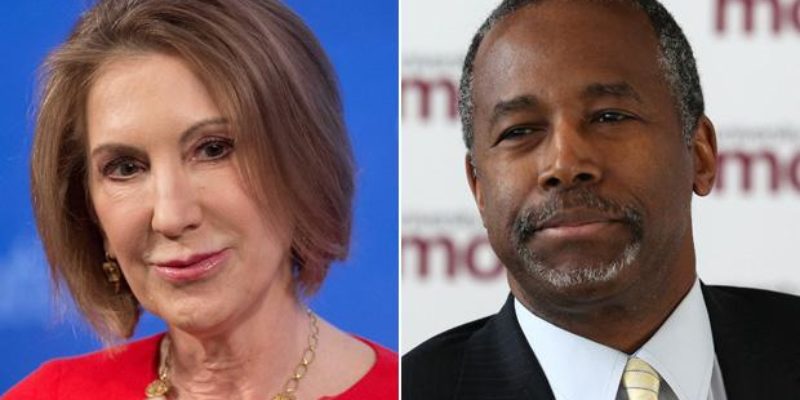 Just as the national press will continue to lament the GOP as the party of ‘old, white men,’ the list of Republican presidential-hopefuls for 2016 may be more diverse than ever.

Today, Dr. Ben Carson, a black conservative and former Hewlett-Packard CEO Carly Fiorina announced their candidacies for president today. Carson’s announcement is currently taking place via a livestream on Youtube, while Fiorina’s came in the form of a Youtube video, almost as a rebuttal to Hillary Clinton’s video announcement.

Carson and Fiorina are both outsides to politics, with neither having held public office before. But, that is what makes gives their candidacies the edge they need to compete with the likes of Sen. Rand Paul (R-KY), Sen. Ted Cruz (R-TX) and Sen. Marco Rubio (R-FL).

So far, the GOP race for president has a woman, a black conservative, a Canadian and a Hispanic. The only white male officially in the race is Paul, though Gov. Scott Walker of Wisconsin and former Gov. Jeb Bush of Florida are expected to announce any moment.

The diversity in the GOP goes beyond the standards of identity politics. For Paul, the presidency is about reforming federal government agencies like the NSA and the IRS, making them more accountable and taking on issues like incarceration rates facing the black community. Paul brings a libertarian-wing to the table.

For Rubio and Cruz, their campaigns rely heavily on immigration reform and solving the country’s Southern Border Crisis. Bush and Walker will likely run as traditional Republicans, discussing how the free market works better when the government gets out of the way.

And Fiorina and Carson are likely to bring a business-mind to the race. Already, we have seen Carson take on leaders of the black community and he is most famous for disputing the effectiveness of Obamacare. Fiorina, on the other hand, has talked heavily about the problems with career politicians like Clinton and has come out to vaguely support gay marriage.

Meanwhile, the Democratic 2016 presidential field is officially between Hillary Clinton and Sen. Bernie Sanders (I-VT). Clinton brings the usual Democrat-talking points to the table, talking about the need for a safety net and federal government involvement in the economy in order to lift individuals up.

And Sanders brings his radical left-wing theories which derive from socialist-thinking philosophers, which he is not at all afraid to say.

All the other expected Democrats who will try to take a swing at the presidency are essentially white men who hold the same exact views as Clinton. There is no difference between the likely Democratic candidates, no diversity.

This coming from the party that parades diversity around as a prop.