If you’re anywhere near Baton Rouge you’ve probably been unable to avoid the back-and-forth on the question of the St. George incorporation, the first major test of which is going to come on May 28. That’s the deadline for the St. George organizers to turn in enough signatures on the incorporation petition to reach a number equal to or above 25 percent of the registered voters inside what would be the boundaries of the new city, a number the registrar says is 17,859.

From what we’re told, the St. George folks are going to have that number. They’ve been canvassing neighborhoods inside the new city like mad in search of people engaged enough on the question and committed enough to have their name and address in the public record for opponents to attack as racists or separatists or whatever; we all know how ugly this question has become, and most people are a lot more interested in voting by secret ballot than signing a petition.

In fact, the Better Together crowd has also had canvassers in the area that would become St. George, specifically targeting people who signed the petition in an effort to get them to recant their signatures and sign a form officially withdrawing from the petition.

Furthermore, you’ve had people sandbagging the petition. Like this guy… 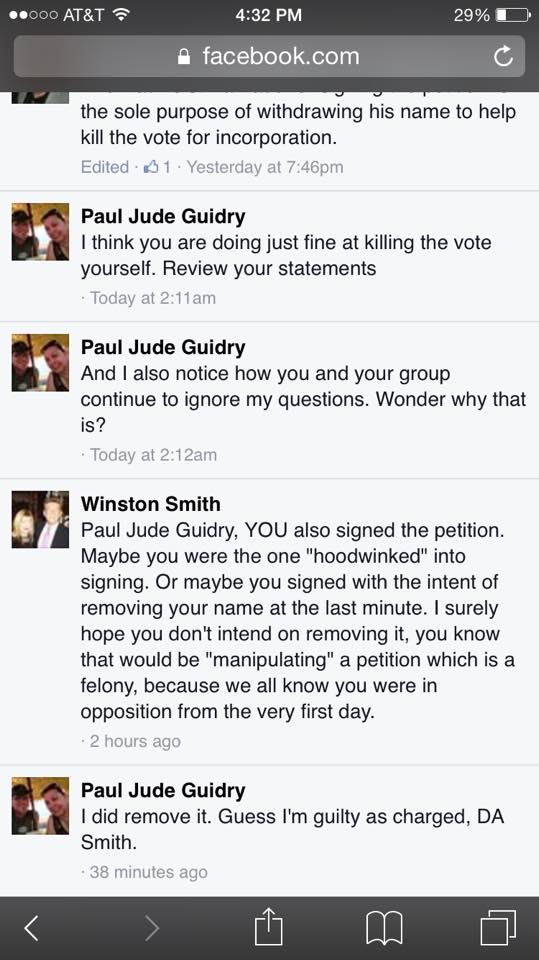 Whether that’s illegal or not is a question we don’t know the answer to, and how widespread the anti-St. George crowd’s use of bogus petitions is we can’t say.

What we do know is we’ll find out.

Essentially what this boils down to is whether the organizers can put themselves far enough above the number in the next five days to overcome the withdrawals and build the final total to 17,859 or more.

If they can do that, the lawsuits begin, and chief among them will be the claim that since the city of Baton Rouge annexed parts of what would have been St. George when the petition was first circulated, that invalidates the whole petition. It’s a rather spurious argument, since to give it credence would essentially be to insure no one could ever incorporate a new city again if the Powers That Be were willing and able to perform such machinations as strategic annexations in the midst of a petition drive like this one.

And there will also be claims made that St. George won’t be a viable city. Support for this is sought by what are now multiple studies performed by consultants hired by the Baton Rouge Area Foundation which say that St. George will have to raise taxes to survive, and in the alternative that St. George would bankrupt the city-parish government. One struggles to understand how the incorporation of a new city in a largely affluent area would be unviable, though it’s also fairly clear that were St. George to come into existence the East Baton Rouge city-parish government is going to have to change its free-spending ways.

But we’re going to know something about the direction of this battle very soon.

The road ahead should the St. George organizers achieve their magic number is interesting enough, but what’s also fascinating is the question of what happens if they fall short. This issue has been a very divisive one in East Baton Rouge Parish, and things have been said which can’t be taken back easily. If there is to be no St. George this year, what steps will BRAF and the other opponents of St. George take to satisfy the underlying concerns that brought St. George this far? And if those concerns aren’t addressed, and the St. George opponents like Metro Councilman John Delgado who have so inflamed passions on the issue, are neither willing to do what’s necessary to bury the hatchet nor make major changes to the direction of Baton Rouge – what then?

If the St. George petition fails this time and triumphalism reigns downtown while the city’s public schools are still sewers of violence and ignorance, traffic is still a mess and the public is unsatisfied with the level of crime, the movement for St. George won’t go away. And in fact, if Baton Rouge elects a Sharon Weston Broome or Ted James as its next mayor-president next year, which at this point is anything but unlikely, it should be no surprise if two years from now, after the legally-mandated two year hiatus, the St. George organizers start all over again with an even larger pool of disenchanted people in unincorporated South Baton Rouge.